Column One: Kadima's Legacy of Nothingness 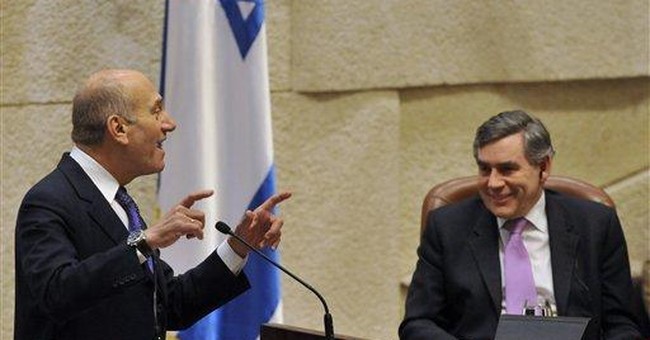 After the dust settled on Prime Minister Ehud Olmert's surprise announcement Wednesday evening that he will resign from office after Kadima's leadership primary on September 17, the main question is, What possessed him to act as he did?

Olmert did not actually resign from office in the normal sense of the term. That is, he's not planning to leave office any time soon. What Olmert did was force Israel into a long period of governmental instability.

So far from leaving office anytime soon, Olmert will remain in power at least three more months, and perhaps for as long as 10 months.

Olmert's non-resignation resignation speech was filled with protestations of patriotism. But it is hard to see how his announcement served the national interest. If Olmert had wanted to do what is best for the country, then he would have announced that his resignation was effective immediately. This would have set the course for a general election in November.

In the interim, and in light of the intensifying security crisis with Iran, a caretaker government could have been formed that would have encompassed all willing Zionist parties represented in the Knesset. If such a government were formed, Israel could have attacked Iran's nuclear installations with the full backing of the Knesset and the people. The political cost of such a vital operation would have been borne equally by all of Israel's political leaders and so, in a sense, it would have been borne by no one. Under such circumstances, Israel's political leaders would have been able to concern themselves only with Israel's survival as they made their best decisions on how to prevent the ayatollahs from acquiring nuclear weapons.

But rather than enable Israel to unite in the face of a threat to its existence, Olmert opted for continued instability, continued uncertainty and a continuation of the polarized status quo that leaves him in office and leaves Israel strategically hamstrung at the hands of a governing coalition that the nation does not want and does not trust. And this situation could easily last for nearly a year.

There are two possible explanations for Olmert's behavior. First, it is possible, as some commentators have noted, that by announcing his decision not to seek reelection in Kadima's leadership primary - and lose overwhelmingly by all accounts - Olmert may be trying to convince the police investigators to allow him to leave office in his own car and not in the back of a paddy wagon.

There is a precedent for such a move. The late president Ezer Weizman resigned from office in 2000 in exchange for an end to the criminal probe against him. And the probe against Weizman - which centered on cash transfers in excess of $540,000 that he received over an extended period from Edward Sarousi, a French businessman - was similar to the sixth of seven ongoing probes against Olmert, where he is being investigated for cash transfers he received from US businessman Morris Talansky.

The other possibility is that Olmert is playing his familiar game of buying time. Buying time has been the enduring theme of his tenure in office.

After Olmert led Israel to defeat in the Second Lebanon War two years ago, he staved off calls for his resignation by appointing the Winograd Committee to study his failures. Eight months later, the Winograd Committee issued its interim report where it concluded that Olmert had failed in his stewardship of the country during the war. In the face of the public outcry that followed, Olmert bought himself another eight months by insisting on waiting until the committee issued its final report.

As the criminal probes against him rose to the top of the national agenda in late April with the revelation that Olmert had accepted cash-stuffed envelops from Talansky for a decade, Olmert bought himself another four months by pledging to resign if indicted. And now, of course, he has bought himself at least three more months, and perhaps up to 11 months more in power. And who knows what unanticipated crisis or windfall may intervene in the meantime and add another few months to his lifespan as prime minister?

In his handling of all of these crises, the good of the country has not been Olmert's primary concern. Indeed, it is far from clear that he ever considered the impact his actions would have on Israel at all. Rather, from crisis to crisis, from one stalling tactic to the next, Olmert has been guided by his single-minded desire to remain in office. And this is not surprising.

Olmert's patent lack of shame is not the only reason that Israel's best interests haven't factored into Olmert's calculations. By placing his personal interests above the national interest, Olmert was loyally reflecting the character of his party. Winning and maintaining power for power's sake, irrespective of the national interest and ideological principles, were the purposes for which Kadima was founded by Ariel Sharon.

Olmert and Kadima are the direct consequences of Sharon's decision to turn his back on his party, and on the ideology that brought him into office in 2003 in favor of clinging to power for power's sake. To remain in office amidst two serious criminal probes, Sharon betrayed his ideological camp and Israel's national security interests. This he did by implementing the discredited radical leftist policy championed by Israel's media and legal fraternity of withdrawing all Israeli military personnel and civilians from the Gaza Strip and transferring control of the area to Fatah, Hamas and Islamic Jihad terror control.

Sharon, Olmert, Foreign Minister Tzipi Livni and their political consultants presented Kadima's rejection of ideology as its chief selling point. By not being committed to either left-wing or right-wing ideals, they assured us that Kadima would always do the right thing for the country.

To maintain and expand their power, Kadima's leaders from Olmert to the party's last backbencher have sought to align their policies with the nation's shifting moods. The nation's mood swings from left to right are always followed by sharp changes in Kadima's policies.

With the nation in a left leaning mood in the run-up to the last election, Kadima announced its plan to give Judea and Samaria to terrorists from Fatah and Hamas. Distinguishing their party from the radical left, which shares their plan, Kadima's leaders explained that they sought to place Israel's major urban centers in Palestinian rocket range not in the interest of peace - as the leftist ideologues would have it - but in the interest of the hardnosed "demographic" aim of putting all the country's Jews in one concentrated area.

Before the nation had an opportunity to fully understand what Kadima's "convergence" plan entailed, Israel's body politic shifted to the right in June 2006 after the Palestinians attacked an IDF post near Gaza and kidnapped Cpl. Gilad Schalit. Two weeks later it shifted further to the right when Hizbullah carried out a nearly identical attack along the border with Lebanon and abducted reservists Eldad Regev and Ehud Goldwasser.

Noticing the public's rightward shift, Olmert and his colleagues followed immediately. When Olmert launched the Second Lebanon War, he sounded downright Churchillian as he promised the nation nothing less than the total defeat of Hizbullah and the return of our hostage servicemen.

But then, when Olmert's bombast was confronted with the hard reality of war, he lost interest in being a right-winger. And so he fought the war like a radical leftist and accepted humiliating defeat. Ever since then, Kadima has tacked to the right and then to the left with no guiding rationale other than the morning's headlines, the weekend's opinion polls, and the threats of its right-wing and left-wing coalition partners.

In the meantime, the actual threats arrayed against Israel as a whole have become more acute and more fateful. But Olmert and his colleagues can't be bothered to deal with them. They are too busy. Deciding who you are each day anew on the basis of the morning radio broadcasts is a time-consuming venture. And their solitary aim remains constant throughout. They just want to stay in power for another day, another week or with a little luck, for a few more months.

From 1977 when Likud first rose to power until 2006 when Kadima formed the government, all of Israel's elections revolved around contrasting ideologies. For 29 years, voters were required to choose which side of the ideological divide they preferred. And making choices isn't easy. Both sides seem to have something to offer.

Then Kadima entered the political stage dead on center and offered voters a way to avoid making a decision. It professed to be all things to all people.

But of course, no one and no political party can be all things to all people. And since Kadima's leaders won't choose whose side they are on for longer than opinion polls stay constant, their party has been nothing to all people.

Here it bears noting that Olmert's slow, meandering exit from office against the backdrop of growing dangers is a fitting end to this sad chapter in Israel's history. For when a government of nothings is running the show, nothing takes precedent over all things - even the most important things.

It can only be hoped that when the next election takes place, voters will have learned the lesson of Kadima. Whether we choose the right ideological camp or the wrong one to lead us, we cannot evade our responsibility to make a choice.