Why Raphael Warnock Shouldn't Be a Pastor or a Senator

Carl Jackson
|
Posted: Nov 30, 2020 12:01 AM
Share   Tweet
The opinions expressed by columnists are their own and do not necessarily represent the views of Townhall.com. 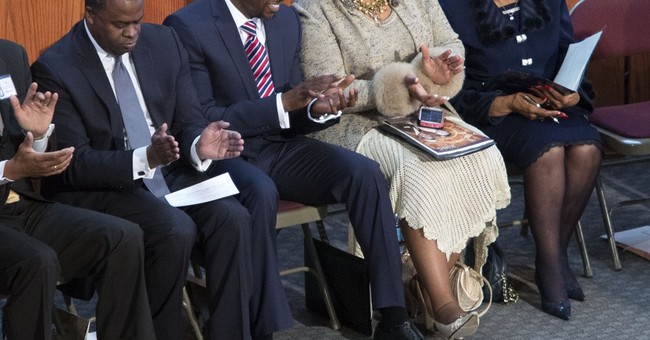 Democratic Georgia senatorial candidate, Raphael Warnock, appears to be a racist, a radical and an anti-Semite. He shouldn’t be a Christian pastor or a U.S. senator. Warnock is in a runoff election against the Republican incumbent, Sen. Kelly Loeffler. The race will be decided on January 5, 2021. Like so many prominent black pastors today, Warnock has embraced a secular worldview that prioritizes identity politics above biblical truth. In a few short years, Black Lives Matter has done more to influence the attitudes of black Americans than black Christians have in decades and we have leaders like Warnock to thank for it.

The self-destructive behavioral patterns that are endemic within the black community will remain until the black Christian church repents. Unless blacks confront the disease destroying black neighborhoods around the country, which is a lack of biblical values being taught and applied in our homes and churches, symptomatic issues such as fatherless homes, abortion, high crime rates, poverty from a lack of quality education, low job skills and poor money management will continue to destroy these struggling communities.

Recently, Warnock got into some hot water when rants from some of his past sermons resurfaced to haunt him. He attacked whites, Jews, cops and the military from behind the pulpit. He has also expressed support for “reproductive rights,” also known as abortion. He misinterpreted Acts 2 of the Bible to justify socialism. Sadly, Warnock is the senior pastor of Ebenezer Baptist Church located in Atlanta, Ga. If that name sounds familiar to you, it is because it was the home church of America’s last and greatest civil rights hero, Dr. Martin Luther King Jr.

Dr. King famously believed that a man should be judged by the content of his character and not by the color of his skin. This belief is consistent with a Biblical worldview. Warnock, however, seems to believe that blackness is a determining factor for eternal salvation, and whiteness is a barrier to it.

As I often say on my radio show, “there’s no affirmative action plan in Heaven.” When we meet God face-to-face, our ethnicity will have nothing to do with whether we enter the pearly gates of Heaven. Our faith in Jesus Christ, as well as our deeds, will be judged on an individual basis. Warnock is playing a dangerous game with his congregants that could have eternal consequences. He preaches as if he’d like to see Uncle Sam submit to his will, rather than he submit to God’s will. Warnock is not a Christian, he’s a heretic. Let’s dissect some of his stupid beliefs together:

Again, Warnock is a racist and an anti-Semite that shouldn’t be a pastor or a senator representing our great country.

Share this on Facebook
Tweet
Trump Responds to Reports Claiming That He Has Conflict with DeSantis
Madeline Leesman
Could We See a Replay of the Afghanistan Evacuation Fiasco in Ukraine Now?
Matt Vespa
Did You Catch What's Bizarre About Fauci's Home Office?
Matt Vespa
CDC Director 'Pivots the Language' on What It Means to be Fully Vaccinated
Katie Pavlich
NPR: We're Standing By Our SCOTUS COVID Story Even Though Everyone Said It Was False
Matt Vespa
SCOTUS Declines to Intervene in Challenge Over Texas Abortion Law
Madeline Leesman