Carl Jackson
|
Posted: Apr 28, 2016 12:02 PM
Share   Tweet
The opinions expressed by columnists are their own and do not necessarily represent the views of Townhall.com. 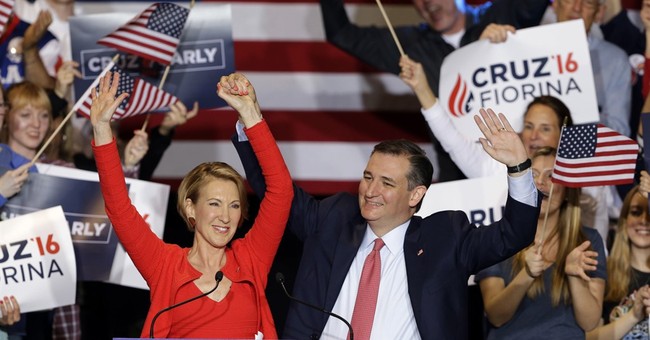 Can you imagine a Carly Fiorina vs Elizabeth Warren debate?

Former presidential candidate Carly Fiorina was a good choice for Sen. Cruz's vice presidential pick, if for no other reason than to steal Trump's thunder after a five state sweep across the Northeast Tuesday night. Not to mention his subsequent foreign policy speech on Wednesday that was totally drowned out by the announcement of a Cruz-Fiorina ticket. Having said that, only time will tell if she was the best choice.

Strategically speaking, Ted Cruz has been a step behind GOP frontrunner Donald Trump's messaging and media campaign. The Texas senator would've been wise to announce his VP pick Sunday evening, rather than the alliance he formed with Ohio Gov. John Kasich, who agreed -at least for a couple of hrs, to back out of the Indiana primary, while Cruz agreed to back out of the New Mexico and Oregon primaries to benefit the Kasich campaign. This alliance played right into Trump's narrative that the establishment was colluding against him. The strategy backfired and likely cost Cruz delegates in Pennsylvania. So why choose Fiorina now, and will it matter? Here are the reasons why it could:

1) Female box checked: Is this political? Of course it is, and who cares? When you're running for office, trying to get an advantage over your opponent is no different than a store clerk trying to out-work his or her peer to get a promotion. I hate gender politics! But, if you're going to play them, Carly is the right choice. She's been a successful business woman, and a devoted wife and mother. No doubt she'll appeal to a broader constituency than Ted Cruz can.

She's a woman of steel and velvet, particularly when it comes to messaging. Throughout the GOP debates, she illustrated an uncanny ability to reframe negatives into positives better than anyone on stage, including, Ted Cruz and Marco Rubio. She knows how to message, and she can do it at the drop of a dime. A skill Cruz lacks. Carly Fiorina had no real organization while she was running. With Cruz's organization and her messaging, they could be a match made in heaven.

2) Outsider box checked: Fiorina is a real outsider, like Dr. Ben Carson was and unlike Donald Trump. Trump has used some of his inherited wealth (created wealth as well) and influence to pay off politicians. Carly didn't inherit her wealth. She worked for it. Becoming the first woman in a male dominated business as the CEO of Hewlett Packard. And, she did so without bribing politicians. Her background in marketing and technology launched her into an advisory role for John McCain's presidential campaign in 2008. During this time she gained a vast knowledge of foreign policy, as she was given access to sensitive military information in order to instruct the campaign on how the military could best use technology developed in the private sector.

3) Business and jobs box checked: Carly Fiorina had a very public rise and fall as the Hewlett Packard CEO, but how she became CEO is inspirational. She knows what it's like to create jobs. She understands the heaviness of causing others to lose jobs. Remember, success isn't the absence of failure. Nonetheless, she knows how to become successful without government intervention. She's reached a level of success fewer than 1 percent of Americans achieve. She knows how to create jobs. She knows how to champion capitalism. More importantly she understands government has to get out of the way in order for the average individual to succeed, and she has the "private sector street cred" to prove it.

4) Indiana box helped: Let's be honest, Ted Cruz not only needs to win Indiana, his campaign has to survive the media cycle just to get to the Indiana primary, after his devastating losses in New York and across the Northeast. If Cruz wins Indiana, the electoral map looks great for him in the month of May, and we're headed to a convention.

5) California box looking good: Carly will definitely help garnering delegates and enthusiasm in California. Despite losing to CA Senator Barbara Boxer in her 2010 senatorial bid by 10 points, her connections with the California GOP and her relationships in the tech industry could be pivotal for the Cruz-Fiorina ticket in the upcoming primary.

The Democrats and their media allies will unleash hell on whomever emerges as our nominee after the GOP convention. Again, only time will tell if Carly was the best pick for Cruz.