Sixteen Reasons Why Cruz Is The Better Anti-Trump Than Rubio

Carl Jackson
|
Posted: Feb 25, 2016 11:52 AM
Share   Tweet
The opinions expressed by columnists are their own and do not necessarily represent the views of Townhall.com. 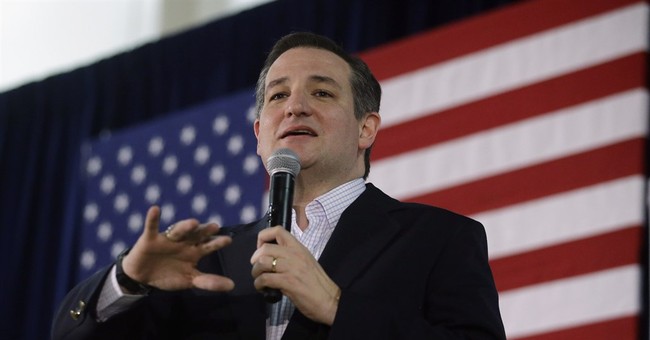 With the exception of former President Bill Clinton, aka the "comeback kid," no one has won the White House in modern history that hasn't first won Iowa, New Hampshire or South Carolina. At this point, Marco Rubio is running to preserve the Republican brand, with the hopes of taking this race all the way to the convention, where he's convinced the delegates will choose him. The problem with that scenario is that it's likely that Rubio won't win any states come Super Tuesday. He also won't win his own state of Florida- a winner take all state, or Ohio, on March 15th. If Rubio fails to win any of the 14 states next week, "Marcomentum" will be a thing of the past, before he ever reaches Florida.

Keep in mind, that even with all of the prestigious endorsements Rubio racked up in South Carolina and Nevada, he still lost significantly to Trump in both states! To top it off, he only beat Cruz by razor thin margins. Honestly, I suspect if Cruz got half the endorsements and positive media coverage as Marco Rubio, it would be a two man race between Cruz and Trump by now.

Nevada was supposed to be a must win state for Rubio - his "firewall." He lost badly! Yet, if you listen to the pundits, Cruz is the crazy one for staying in the race because "evangelicals" aren't flocking to him. Evangelicals are fickle, many are new to the arena of politics, and most are nominal in their beliefs at best. Not to mention, Donald Trump threw a wrench in everyone's plans this year. Cruz miscalculated just as Rubio did in Iowa and New Hampshire. That's nothing that one solid debate performance can't fix!

Unfortunately, the establishment hates him so much, it appears they'd rather have Trump or Hillary win the White House just to keep him out of it. I've heard journalists and radio hosts alike disparage Cruz relentlessly over his campaign tactics, his relationships with other politicians, lack of appeal to moderates, and his inability to win "evangelicals." What hasn't been mentioned on many of these shows, or in columns, is that with a good debate performance, he's the only "anti-Trump" candidate that is likely to win any of the Super Tuesday states next week. He's also the only other candidate, and first Latino ever to win a caucus state as a presidential candidate. A celebration GOP leadership, conveniently forgot to acknowledge.

In a head-to-head matchup against Trump, Cruz would fare better than Rubio. Cruz has shown a proclivity to go after Trump, while Rubio has played it safe for fear of being embarrassed by him. Another slip up like New Hampshire, and Rubio knows his presidential aspirations, and those of the GOP establishment could be gone for 2016.

One can only tout 2nd, 3rd, and 5th place finishes for so long, before voters figure out you're not winning! Rubio constantly reminds the media that the polls show that he's the only candidate that can beat Hillary in November. Not true! Polls show that he'd have a slightly larger margin of victory than the other candidates, except for Trump, who loses to Hillary. Polls also show that he won't win a primary race anytime soon! If he believes the polls, which have been inaccurate at best, why hasn't he mentioned the primary polls?

On March 1, Minnesota will hold a closed caucus, while thirteen other states will hold their caucuses and primaries as well. Alaska, Colorado, North Dakota, and Oklahoma will hold closed caucuses. Wyoming will hold a primary on Super Tuesday. Meanwhile, Alabama, Arkansas, Georgia, Massachusetts, Minnesota, Tennessee, Texas, Vermont, and Virginia are "open primaries," where even Mickey Mouse can vote.

Open primaries are favorable to moderates. Therefore, Donald Trump should have lots of success in those states. Unless he has another bad debate performance, Cruz is projected to win the states of Texas and Arkansas. Alaska and Tennessee could be in play as well with Dr. Ben Carson slipping so far in the polls. Rubio's best chances to do well on Super Tuesday appear to be in Colorado, Massachusetts, Minnesota, Virginia and Tennessee. However, current polls show, he won't win one of them!

Like Nevada, Florida is a must win state for Rubio. He's polling a distant 3rd, after Trump and Cruz! I'm sorry, with Trump in the race, no one can go an entire month without winning a state and expect to become the GOP nominee! Not even if you're the media and establishment favorite! The projection of Rubio's inevitability as the best "anti-Trump" candidate would be laughable were it not for major news outlets and talk radio host forcing the narrative.

Listen, I like Rubio! He's an undeniable talent, and I believe he'll be president one day. But, facts are a stubborn thing! The "Gang of Eight" bill hurt him! Ted Cruz isn't practicing a "pattern of deceit" by calling him out on his bill! His lack of private sector experience also hurts him. Good looks, and a smooth tongue all wrapped up in a GOP establishment package, can take you to a lot of places, but the White House in 2016 isn't one of them.

If you buy into the narratives of the GOP establishment and the media, they'll have you convinced Rubio could be the only GOP candidate ever to lose the first 20 primary and caucus states, yet remain "the most electable" candidate in an insurgent year! It's crazy! How out of touch do you have to be? In the year of the "outsiders," all I can say is sorry, ain't happenin' cap'n!