What Does the Constitution Mean to Amazon?

Carl Horowitz
|
Posted: Dec 05, 2020 12:01 AM
Share   Tweet
The opinions expressed by columnists are their own and do not necessarily represent the views of Townhall.com. 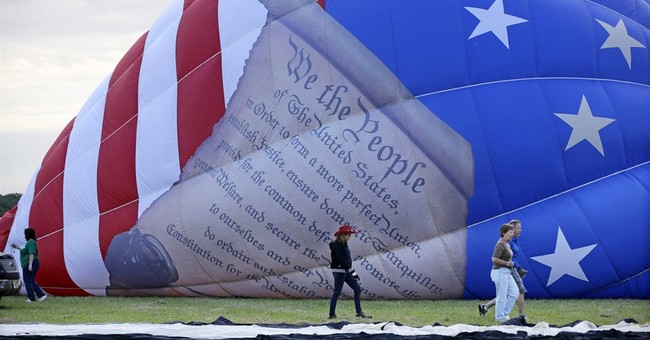 Of all the ways that a Biden presidency and its radical apparatchiks could “reset” America’s priorities, none would be as lethal as an overhaul or outright repeal of the Constitution. Such an event seems unlikely for now. But should it materialize, Amazon will have enabled it. How so?

On October 16, Amazon Prime Video debuted a film version of the Broadway stage production What the Constitution Means to Me. Conceived, written, and starring veteran playwright-actress Heidi Schreck, the play, mostly a monologue, ran for a few months during 2019, packing the Helen Hayes Theater. It won rave reviews from “woke” audiences and critics, receiving two Tony nominations and a Pulitzer nomination. Amazon, sufficiently impressed, bought the movie rights. Marielle Heller (The Diary of a Teenage Girl, A Beautiful Day in the Neighborhood) directs the new adaptation, but otherwise it’s still Ms. Schreck’s show.

The play, running at 100 minutes, functions as political autobiography. That’s kind of the problem. Shreck is an advertisement for herself, heavy on the radicalism, psychodrama, and snark. Imagine Samantha Bee as a law professor, and you get the idea.

The play opens with Schreck playing her former teenage self, a winsome all-American gal expressing reverence for the Constitution. It ends with her vehement rejection of that document and the injustices it supposedly has protected, with a young actress playing the young Schreck in a mock debate. In the space between is a guided tour on race, domestic violence, immigration, and other social issues – as Heidi sees things.

What the Constitution Means to Me is an ill-conceived piece of agitprop whose insights rarely rise above solipsism. Yet its character arc, if unintentionally, is an apt metaphor for America’s radicalization these past few decades.

Heidi Schreck, not to be confused with the lovable DreamWorks Animation ogre Shrek, believes our Constitution was written by and for privileged white males, and thus needs a drastic reboot to be relevant to future generations. In an interview with Time magazine (November 2/November 9, 2020), she was asked: “Your play ends with a mock debate about whether to keep or abolish the Constitution. Where do you stand at the moment?” She responded:

"I think we should keep the Constitution. I have a lot of ideas for amendments. But really, the purpose of the debate is to allow the audience and performers to make time and space to imagine something else: to say, “If we were the framers, what would we do differently? What kind of future do we want for ourselves?”

This, of course, is the familiar egalitarian interpretation of the Constitution as a “living” document, readily adaptable to prevailing political winds. One dreads to contemplate her vision of the future.

Now nearing 50, and a new mom of twins, Ms. Schreck grew up in Wenatchee, Wash. in the north-central part of the state. As a teen, she wrote and gave a stump speech celebrating the Constitution before American Legion audiences across the country. Her speaking and debating skills won her a scholarship to the University of Oregon. After graduation, she worked as a teacher and then as a journalist in post-Communist Russia, apparently clueless as to why Russia dumped Communism. Eventually resettling in New York City, she pursued a career in theater, winning engagements for plays she had written, Creature and Grand Concourse. She also wrote episodes for Nurse Jackie, Billions and other TV shows.

What the Constitution Means to Me debuted at a local festival in 2017, moved to Off-Broadway in 2018, and then to Broadway in 2019, where it played to sellout crowds. Like Lin-Manuel Miranda’s Hamilton, it was historical revisionism tailored to a hipster herd.

Heidi Schreck’s resentment of our nation’s identity is transparent. Why, then, is Amazon Prime Video giving it a platform? It could be that the movie adaptation is purely a business decision. This play, after all, made a small fortune.

But evidence suggests ideology was at work. Amazon Prime Video recently was all set to debut a documentary, What Killed Michael Brown?, concerning the 2014 fatal police shooting of the “unarmed” Michael Brown, the raging fury of Ferguson, Missouri. Produced and directed by Eli Steele, son of Shelby Steele, a well-regarded, black conservative affiliated with Stanford University’s Hoover Institution, the movie concludes, contrary to received wisdom, that Brown’s death was not a “racist killing.”

Feeling employee and subscriber pressure, Amazon yanked the film around mid-October, informing the Steeles via email that it “doesn’t meet Prime Video’s content quality expectations” and that it “will not be accepting resubmission of this title.” This reads like corporate spin. The film’s conclusions, including its rejection of the “Hands up, don’t shoot” hoax, are accurate. My 2018 biography on the reprehensible Al Sharpton reached similar conclusions in its chapter on Ferguson.

The good news is that Amazon, stung by unexpected negative publicity, subsequently has rescinded its decision. The documentary is now available for purchase. While gratifying, it remains undeniable that Amazon, like most of corporate America, has moved way leftward.

As for our Constitution, it protects the right to put on a play – even one opposing the Constitution. Even Heidi Schreck might grasp that.