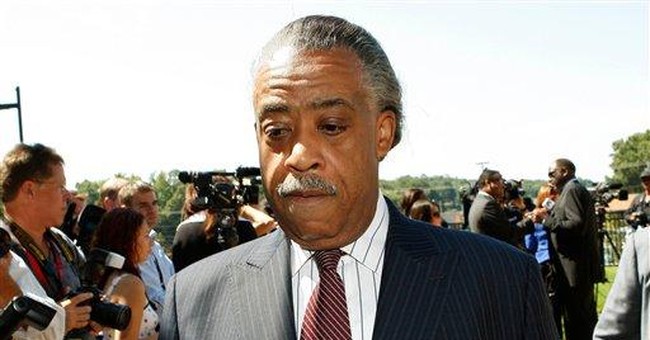 The term “black civil-rights leader” has acquired a bad name over the last few decades – and deservedly so.  This political type cannot accept the fact that his mission effectively was accomplished decades ago.  Thus, he prefers to stoke the fires of collective grievance so as to retain his audiences and his sense of importance.

Knowing how to identify and defeat targets, and form “partnerships” with the vanquished – and under the guise of a national “conversation” on race – is a fine art.  High practitioners such as Al Sharpton, Jesse Jackson and Julian Bond have few peers when it comes to instilling anger in black audiences and fearful shame in white ones.  But even they could take a few refresher lessons from the man instrumental in getting the ball rolling some 70 years ago, the late Harlem clergyman and Congressman, Adam Clayton Powell, Jr.

This month marks the 100th anniversary of the birth of the charismatic Powell, born on November 29, 1908.  He’s been the subject of several biographies and a Showtime cable TV network film.  As much as Martin Luther King Jr., he left an indelible stamp on the way people in this country think about race.

A hero to millions of blacks, in an out of New York, Adam Clayton Powell had extensive white ancestry on both sides of his family.  Indeed, at first glance it was easy to mistake him for Caucasian.  During his youth, many people did.  Yet like so many light-skinned blacks – think of Julian Bond, Malcolm X, Louis Farrakhan, Jeremiah Wright and Barack Obama – his sense that his blackness was a hindrance to social advancement proved a radicalizing experience.  Powell harbored mistrust of whites and outright contempt for black “Uncle Toms” who took orders from them.  Whether you loved Adam Clayton Powell or hated him, he made sure of one thing:  You never saw him taking orders.  That swagger eventually would rub off on a certain preadolescent boy who one day would come to define America’s race relations more than anyone else.  But I digress.

It was the Great Depression.  Powell, holder of a master’s degree in theology from Columbia University, was furious that New York’s blacks lacked economic opportunity.  He came to chair a local group known as the Coordinating Committee for Employment.  Through this entity, he organized mass meetings, rent strikes, and boycotts against white employers.  The committee delivered results, not just rhetoric.  When he organized a picket line at the 1939 New York World’s Fair executive offices at the Empire State Building, management quickly increased the number of black employees from around 200 to more than 700.  In the early Forties, he led a boycott of the city transit authority, which prompted the authority to hire 200 black employees.  He also successfully pressured white-owned drug stores into hiring black pharmacists.

Powell didn’t engage in violence, but he wasn’t above providing cover for it either.  In the aftermath of the deadly 1935 Harlem riot, he wrote several published articles as to its causes, citing “the injustices of discrimination in employment, the aggressions of the police, and the racial segregation.”  He expressed similar sentiments following another Harlem riot in 1943.

What made Powell, like so many other civil-rights leaders, doubly effective was his religious conviction.  His father, Adam Clayton Powell, Sr., was lead pastor at Harlem’s Abyssinian Baptist Church.  In 1937, he would inherit the position.  His apprenticeship had prepared him well.  Soon he was addressing overflow audiences in measured tones of anger, eloquence and piety.

Politics seemed a logical next step.  In 1941, he was elected to the New York City Council as its first black representative.  In 1944, he ran as a Democrat for Congress, post-riot redistricting having created a seat tailor-made for Harlem.  He easily won election, the first of many victories.  One of two black congressman (the other was William Dawson of Chicago), Powell broke with tradition in ways that aided and undermined the cause of liberty.  He led efforts to desegregate the military, outlaw lynching and ban the use of racially-motivated poll taxes.  At the same time, he was a key architect of the welfare state, especially starting in 1961 when he became chairman of the House Education and Labor Committee.  Under his direction, the committee approved literally dozens of bills that eventually were signed into law.  Powell could lay claim to making possible a large portion of President Kennedy’s New Frontier and President Johnson’s Great Society.

Powell always found time to come home and speak from the pulpit at his Abyssinian Baptist Church.  Among his audiences was an 11-year-old boy from Brooklyn, Al Sharpton, Jr.  Born in 1954, young Al already had been preaching since age 4 at the Temple of God in Christ in Queens, N.Y.; by 10, he would be ordained a Pentecostal minister by the church’s pastor, the Reverend F. D. Washington.  The “wonder-boy preacher” had quite a local following, too; he already had been an opening act for gospel singer Mahalia Jackson.  Sharpton idolized Powell.  He recalls the first encounter:

I’ll never forget to this day the first time I actually laid eyes on Adam Clayton Powell Jr.  He walked out of the side door into the sanctuary in his robe, with that straight, long posture.  He walked up those marble stairs to the semicircular pulpit.  I thought I had seen God….He had this magnetism and this majestic air.  He was very elegant, but at the same time defiant – a real man’s man.

After the sermon, Sharpton screwed up the courage to seek a personal meeting.  After persistent pleading with Powell’s secretary, he met his idol face to face.  To his surprise, Powell recognized him, exclaiming, “Alfred Sharpton!  Boy preacher from Brooklyn.”  The Congressman, it turned out, was a fan of Reverend Washington’s radio program.  It was the start of a long friendship.

Al Sharpton learned many lessons from Adam Clayton Powell, all right.  The problem is that they weren’t necessarily the right ones.

For one thing, Powell misused his office for private gain.  He beat a tax evasion rap in 1960, but evidence suggested he had lucked out.  He also enjoyed the good life, regularly shuttling between Washington and his vacation home in Bimini, the Bahamas.  Living well wasn’t illegal.  But paying for pleasure out of committee funds was.  After a lengthy probe, Powell’s colleagues concluded he had done just that.  The House of Representatives’ Democratic Caucus in January 1967 stripped him of his chairmanship, and two months later, the full House voted 307-116 to exclude him.

His seat now vacant, Powell campaigned the following month in a special election to get it back.  He won, but his colleagues disallowed him from taking his seat.  Powell promptly sued to rescind that decision, eventually winning in the Supreme Court in June 1969, after winning re-election the previous November.  Powell left his self-imposed Bimini exile and returned to Congress, minus seniority.  But his career would be short-lived.  In the 1970 Democratic primary, he lost by a razor-thin margin to upstart Charles Rangel, who to this day holds the Harlem seat.  Two years later, Powell died of acute prostatitis.

Powell’s ethical lapses couldn’t have sent the right signals to Sharpton, who has demonstrated a propensity for similar behavior.  In the spring of 2004, the Federal Election Commission ruled that Sharpton had to return $100,000 in election matching funds that he raised for his presidential campaign and that he was ineligible for another nearly $80,000 in extra funds.  Related to that campaign, about 10 of his employees and associates in December 2007 received subpoenas to appear before a federal grand jury.  And this past May, authorities announced that he and affiliated groups owed a combined $1.5 million in federal, state and city back taxes and penalties.  His response:  “Whatever retaliation they do on me, we never stop.  I think that is why they try to intimidate us.”

But a more lasting mark of Powell’s influence on Al Sharpton was a loathing of moderation as a political style and as a set of beliefs.  Sharpton writes:  “What I learned from Powell about leadership…is that you can’t care what people think.  Adam Clayton Powell did not care about being accepted by society.”  In a defining moment, Sharpton recalls advice Powell gave him during a car ride:

“Kid…Don’t ever forget this:  If you expose your own weaknesses, they can never use them against you.  ‘Cause can’t nobody tell what everybody already knows.  What might appear to be reckless behavior on my part is really defense.  They can never threaten to expose me, because I expose myself.

And not long before his death, Powell conveyed these words of wisdom to his understudy:

These yellow Uncle Toms are taking over the blacks in New York.  Don’t you stop fighting.  If you want to do something for Adam, get rid of these Uncle Toms.

Sharpton never forgot those words – or the desire for payback against whites whenever the opportunity arose.  He doesn’t apologize for any of his public incitements, whether in Crown Heights, Howard Beach or the streets of Harlem in front of Freddie’s Fashion Mart.  White folks, he bitterly complains, “are asking me to grovel.  They want black children to say that they forced a black man coming out of the hardcore ghetto to his knees.”  Actually, a little contrition would do just fine.

The civil-rights movement of today thrives on intimidating whites and manipulating emotions of blacks.  The forebodings of blood flowing in the streets if Barack Obama loses to John McCain this Tuesday are a legacy of a political style whose prime exemplar is Al Sharpton.  It’s important to know that he had an excellent early teacher.