DiCaprio’s Titanic Failure: Did “Before the Flood” Sink on Its Maiden Voyage?

Calvin Beisner  |  Nov 03, 2016
The opinions expressed by columnists are their own and do not necessarily represent the views of Townhall.com.
Top Columns
Trending on Townhall Media 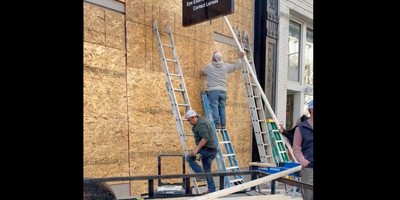 Early in Leonardo DiCaprio’s Before the Flood, which aired Sunday night on the National Geographic Channel, we see a clip of DiCaprio speaking before the U.N. General Assembly, saying, “I stand before you not as an expert.”

That’s the most credible line in the movie.

And the least credible may be one that follows almost immediately: “I want to do everything I can to learn more about this issue.”

If he’d really meant that, he might have gone to the trouble to speak to some of the world-class scientists who are climate realists, believing that while human emissions of CO2 almost certainly do make global average temperature higher than it otherwise would be, natural causes outweigh it, its effects are much smaller than the alarmists claim, and the cost of mitigating it would be almost entirely wasted while trapping the world’s poorest billions in long-term poverty and the high rates of disease and premature death that invariably accompany it.

Climate alarmists everywhere were all abuzz that Before the Flood was finally going to enlighten Americans everywhere about the catastrophic future we or (get the hankies ready) our children and grandchildren face if we don’t all get on board the ark of the Paris climate agreement.

And then the 2-hour documentary aired.

And by cable TV standards it made next to zero impact.

Let’s just say that’s dismal, especially for one of the world’s most popular entertainment stars. What happened to all the millions and millions of girls (not to mention older women) who fell head-over-heels in love with the dreamy-handsome star of the hyper-romantic Titanic two decades ago? I guess they just couldn’t feel the love oozing out of this new propaganda thriller snoozer.

It’s not as if Before the Flood had a cast of unknowns. Arguably the most widely recognized, and possibly the most revered, man in the world, Pope Francis, had a featured role. So did President Barack Obama, former President Bill Clinton, U.N. Secretary-General Ban Ki-Moon, Secretary of State John Kerry, and of course Mr. Global Warming Himself, former Vice President Al Gore (not to mention Michael “Hockey Stick” Mann and electric-car-subsidy-king Elon Musk). Surely those, coupled with DiCaprio (the United Nations’ “Messenger of Peace on Climate Change”) should have drawn a huge audience?

The trouble is, try as they might, climate alarmists just aren’t convincing Americans that climate change is a top-priority issue.

A Gallup poll back in May found that out of 42 issues likely to be discussed in the Presidential campaign, environment/pollution ranked #16 in concern, with 2% of Americans saying they were “most interested” in that. That put it behind #1 the economy, 19%; #2 immigration, 14%; #3 healthcare/healthcare costs/healthcare reform, 10%; #4 defense/national defense/homeland security, 9%; #5 education, 8%; #6 the federal deficit/budget, 7%; #7 wages/earning a decent wage/decline of the middle class, 6%; #8 jobs/unemployment, 6%; #9 terrorism, 5%; and seven other issues. Indeed, of those 15 issues that ranked above environment/pollution, numbers 1, 3, 6, 7, 8, and 15 (poverty/the poor/homelessness, 2%) are all part of “the economy,” adding up to 50%.

And of course climate change is only one aspect of “environment/pollution,” so it would get only a portion of the 2% saying they were “most interested” in that. That suggests that another finding in the same poll—that 21% of Americans consider climate change “extremely important” and another 26% “very important”—isn’t particularly realistic. Asking people to rank issues by most interest forces them to prioritize, whereas just asking them how important they think an issue is yields a less carefully thought-out answer. The poll also showed that 53% considered climate change “somewhat important” (27%) or “not important” (28%).

Why do the alarmists fail to get Americans alarmed? Because, despite their false claims of overwhelming scientific consensus, Americans have caught on to the fact that the scientific evidence refutes claims of manmade warming so rapid and dangerous as to justify spending $1 to $2 Trillion a year trying to prevent it when the total reward for that will be an almost immeasurable and ecologically inconsequential 0.3 degree Fahrenheit reduction in global average temperature in the year 2100.

In the end, Before the Flood is simple propaganda meant to boost Hillary Clinton’s prospects for the Presidency. The tiny bit of scientific content is not simply unbalanced but beyond credibility, as Tom Harris, executive director of the International Climate Science Coalition, showed.

“As an actor, I pretend for a living,” DiCaprio says a few minutes into the film. “I play fictitious characters often solving fictitious problems.” Yes, and while the character he plays in Before the Flood isn’t fictitious, the problem he wants to solve largely is.