Stealth Advocacy on Climate Change: A Catastrophic Failure of Science

Calvin Beisner
|
Posted: Sep 13, 2016 12:01 AM
Share   Tweet
The opinions expressed by columnists are their own and do not necessarily represent the views of Townhall.com. 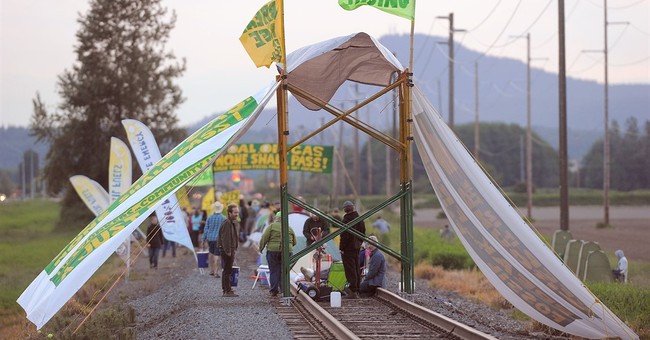 The planet is doomed unless humans achieve zero net “carbon” emissions within 40 years—and maybe even if we do.

That’s the word from eleven co-authors, led by Johan Rockstöm of the Stockholm Resilience Centre, of a pseudo-scientific screed published August 24 in Earth’s Future, an open-access online journal of the American Geophysical Union.

The scale of the decarbonisation challenge to meet the Paris Agreement is underplayed in the public arena. It will require precipitous emission reductions and a new carbon sink on the scale of the ocean sink within 40 years. Even then, the world is extremely likely to overshoot. A catastrophic failure of policy, for example waiting another decade for transformative policy and full commitments to fossil-free economies, will have irreversible and deleterious repercussions for humanity's remaining time on Earth. Only a global zero carbon roadmap will put the world on a course to phase-out greenhouse gas emissions and create the essential carbon sinks for Earth-system stability, without which, world prosperity is not possible.

And here’s why the article’s a pseudo-scientific screed:

First, the computer climate models on which predictions of rapid warming from enhanced atmospheric greenhouse gas concentration are based “run hot,” simulating two to three times the warming actually observed over relevant periods—during which non-anthropogenic causes probably accounted for some and could have accounted for all the observed warming—and therefore provide no rational basis for predicting future GAT.

Second, nobody—but nobody—has demonstrated scientifically that global average temperature (GAT) no more than 2°C above the pre-industrial average (the limit aimed for by the Paris agreement) is optimal, or that GAT higher than that will even be net harmful, let alone catastrophic.

Third, the aim of “Earth-system stability” is scientifically absurd—undefined, unnatural, and unachievable. Natural systems—especially coupled non-linear chaotic fluid-dynamic systems like Earth’s climate—are not, never have been, and never will be stable. Nobody knows what “Earth-system stability” would look like. Climate change is Earth’s natural state; climate stability is science fiction.

Fourth, saying that “waiting another decade for transformative policy and full commitments to fossil-free economies” would be a “catastrophic failure of policy” with “irreversible and deleterious repercussions for humanity’s remaining time on Earth” is sheer fearmongering without a shred of scientific evidence. Even ice ages aren’t “irreversible”; no empirical evidence (as opposed to modeled hypotheses) suggests that a warmer Earth is worse for humans than a cooler Earth; and human history tells us the opposite. “Warmer periods are called optima because for human civilization, and much of nature, warm is better than cold,” writes Michael Hart in Hubris: The Troubling Science, Economics, and Politics of Climate Change (Kindle location 3197).

Fifth, even if real scientific investigation (which doesn’t stop with modeling but tests models by empirical observation) could tell us that, say, falling 50 percent short of net zero “carbon” emissions would raise GAT by, say, 3°C and that that, in turn, would cause significant harms, that wouldn’t tell us how we ought to respond. Empirical science tries to describe the way the world works. It doesn’t—it can’t—tell us what we ought, morally, to do in response.

While science can inform policymakers, it can’t determine policy. Policymakers must do cost/benefit analysis, taking into account tradeoffs, such as balancing risks from climate change against those from poverty, and as Hans von Storch points out, “judgments of the value of costs versus benefits is [sic] a highly subjective, value-laden calculation.”

Sufficiently wealthy people can thrive in any climate and are better protected against all extreme weather events than poor people. If human health and longevity are a significant aim of policy, then the increasing prosperity facilitated by the energy derived from GHG-releasing hydrocarbon fuels will outweigh the increased climate-related risks even if the climate alarmists are right.

As Indur Goklany has shown, even assuming that the climate models on which the Intergovernmental Panel on Climate Change (IPCC) accurately predict (rather than exaggerate by 2 to 3 times) the warming effect of added CO2 in the atmosphere, people the world over, and especially in developing countries, will be wealthier in warmer than in cooler scenarios, making them less vulnerable than today to all risks—including those related to climate.

Full implementation of all nations’ commitments under the Paris agreement, at a cost of $1–2 trillion annually from 2030 onward, would, as Björn Lomborg calculates even while assuming the IPCC’s exaggerated estimates of CO2’s warming effect, reduce GAT in 2100 by just 0.17°C, an amount too little to have significant impact.

Rockstöm and his co-authors are a prime example of what Roger Pielke Jr. calls “stealth issue advocates,” a role “characterized by the expert who seeks to hide his/her advocacy behind a facade of science.” Stealth advocacy, Pielke says, is “the fastest route to pathologically politicizing science. It is also what gives scientists as advocates a bad name.”