Calvin Beisner
|
Posted: Jun 10, 2016 4:34 PM
Share   Tweet
The opinions expressed by columnists are their own and do not necessarily represent the views of Townhall.com. 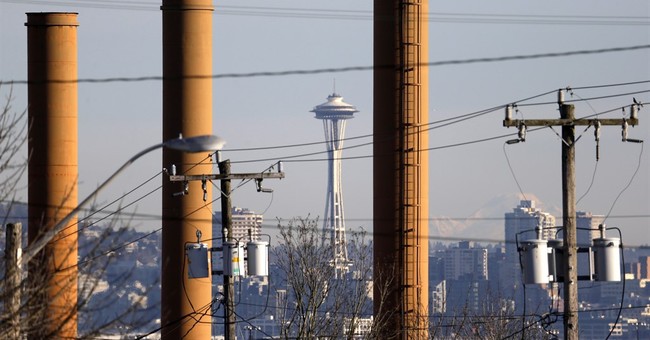 Neither are you generally ignorant. You know lots of law.

But the day of the “Renaissance man,” vastly learned across all fields of knowledge, is long gone. All intelligent and learned people are ignorant about some things.

So, U.S. Attorney General Loretta Lynch and members of Attorneys General United for Clean Power, take no offense when I tell you that your intent to investigate and potentially prosecute, civilly or criminally, corporations, think tanks, and individuals for fraud, under RICO (Racketeer Influenced and Corrupt Organizations Act) or otherwise, because they question the causes, magnitude, risks, and benefits of global warming, and best responses to it, is a dead giveaway that you’re ignorant about climate science and related climate and energy policy.

I’ve thought this ever since you first went public, but an email from Ed Maibach, Professor in the Department of Communications and Director of the Center for Climate Change Communication at George Mason University (GMU), to Jagadish Shukla, Professor of Climate Dynamics and president of the Center for Ocean-Land-Atmosphere Studies and the Institute of Global Environment and Society at GMU, dated July 22, 2015, ironically makes the point:

I had breakfast with David Michaels today. He is currently the Director of the Occupational Health and Safety Administration (in the US Department of Labor), and a former environmental health colleague of mine at George Washington University. He is an expert in the case against the tobacco industry.

His [sic] feels the odds of the DOJ [Department of Justice] pursuing this case against [the fossil fuel] industry are slim to none, because there are no easily quantifiable [health care] costs that the government can seek reimbursement for.

That said, I have no objection to our sending a letter to the President, our Maryland Senators and members of Congress …, with a cc to Senator [Sheldon] Whitehouse [D-RI], asking them to support Senator Whitehouse’s call for a RICO investigation.

That’s ironic because it comes from one of the 20 signers of Shukla’s infamous letter to AG Lynch and the head of the White House Office of Science and Technology Policy urging a RICO investigation similar to that against tobacco companies in the 1990s.

The ironies of Maibach’s email are obvious enough. He cites an expert who thinks the odds of DOJ’s acting “are slim to none,” yet signs a letter asking DOJ to do it. He knows why the odds are slim: “because there are no easily quantifiable … costs that the government can seek reimbursement for.” Yet he signs a letter saying, “We are now at high risk of seriously destabilizing the Earth’s climate and irreparably harming people around the world.”

But the chief irony I have in mind is that you, attorneys general—none of whom, presumably, is an expert in climate science or ecological biology or the economics and engineering of energy or any of the many other fields relevant to the controversy—have launched precisely the action Maibach reported Michaels said DOJ wouldn’t launch for lack of easily quantifiable costs.

Now, why would Michaels have said there were no easily quantifiable costs?

Because, unlike in the case of tobacco’s health risks, there are innumerable and enormous holes in the case (not for human contribution to global warming but) for manmade global warming dangerous enough to justify spending trillions of dollars reinventing the world’s energy system to mitigate it, particularly when competing use of those trillions might bring far greater benefit.

And you, intelligent and learned all, are ignorant of those enormous holes.

It’s not entirely your fault. Journalists have been delinquent in reporting them. Climate alarmists have worked hard to deprive dissenters of research funds, jobs, and publication while hiding their own scientific misconduct. And it is ever so much easier to tell a scary story to motivate the public than to unpack the gory details with all their uncertainties.

So here are a few recommendations for you to remedy your ignorance:

Start by getting a grasp of the basic science of climate change by reading former Intergovernmental Panel on Climate Change (IPCC) Chairman Sir John Houghton’s Global Warming: The Complete Briefing.

If you’re brave, get into the weeds of why the IPCC said in its Third Assessment Report, “The climate system is a coupled non-linear chaotic system, and therefore the long-term prediction of future climate states is not possible” (emphasis added), by reading Taken By Storm: The Troubled Science, Policy and Politics of Global Warming, by applied mathematician Christopher Essex and environmental economist and statistician Ross McKitrick. You’ve probably never heard of the Navier-Stokes equation, but it is unsolved (and a million-dollar prize awaits anyone who solves it), yet accurate long-term prediction of climate requires its solution.

Go beyond journalists’ breathless reports based on the biased and unrepresentative Summary for Policymakers and actually read the (mostly very good) thousands of pages of the main texts of the Fifth Assessment Report of the IPCC (including Working Group 3, whose predictions indicate countries poorest today are better off under warmer than cooler scenarios because in their models economic growth fueled by fossil fuels drives the warming). In them you’ll discover far more uncertainty than the SPM reveals.

Read the thousands of pages of the competing reports from the Nongovernmental [hence less politicized] International Panel on Climate Change.

Get acquainted with the meaning of “climate sensitivity” and why estimates of it—and consequently of all effects of global warming driven by human emissions of CO2 and other deceptively named “greenhouse gases”—have been declining over the years.

Learn a little about “energy density” and “power density” and how they relate to questions about the engineering and costs of various energy sources from Robert Bryce’s Power Hungry: The Myths of "Green" Energy and the Real Fuels of the Future and then about the costs of replacing fossil fuels as the source of roughly 85% of all the world’s energy with wind, solar, and other “renewable” options.

If you do these things, I don’t guarantee you’ll become skeptical of dangerous manmade global warming, but I do expect you’ll understand—because you’re smart—that the issues are far more complex than you thought, and certainly far too complex to be adjudicated in a court of law that needs to find “easily quantifiable costs” to justify a ruling.

You’ll also learn that honest people intelligent as yourselves—and maybe better informed—can disagree about the causes, magnitude, risks, and benefits of global warming, and best responses to it, without being mafia bosses. You’ll discover that what motivates us is far more our concern not to trap billions of people in poverty by denying them access to the abundant, reliable, affordable energy indispensable to lifting and keeping any society out of poverty.

And then maybe, too—before Congress takes you to the woodshed—you’ll decide to back off your potentially felonious conspiracy to “injure, oppress, threaten, or intimidate any person … in the free exercise or enjoyment of any right or privilege secured to him by the Constitution or laws of the United States, or because of his having so exercised the same,” for which you could be fined or imprisoned up to ten years, or both (18 U.S.C. 241).