Obama the Climate Bully Pounds the Pulpit in Paris 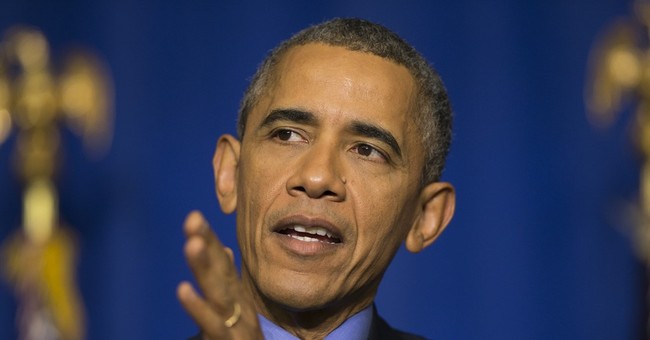 In his sermon at the UN climate summit in Paris Monday President Obama—the same President Obama who travels the world apologizing for his country—played the classic American bully running roughshod over everyone else.

How? Let me count the ways.

First, he ran roughshod over other world leaders.

He spoke over four times longer than all were instructed to speak—14 minutes instead of 3.

It was no accident. His 1,744-word script could have been delivered in 3 minutes only by one of those professional super-fast readers whom you can’t begin to understand. And at the 9-minute mark, three times as long as he was supposed to speak, he ignored beeps reminding him to quit and went on for another 5 minutes.

Second, he ran roughshod over truth.

For instance, he claimed that “climate keeps changing faster than our efforts to address it.” But the best data we have about global average temperature, the satellite data, show no global warming at all for 18 years and 9 months, since February of 1997.

Nine times he spoke of “climate change,” code for “manmade global warming so dangerous we must spend trillions trying to reduce it.” He never once said “global warming.”

Why? Could it be because “climate change,” which happens all the time, is tougher to refute than “global warming,” which hasn’t happened in nearly 19 years?

He spoke of “carbon emissions” and “carbon pollution” from “high-carbon fossil fuels” as the culprit driving global warming and aspired to a “low-carbon future.” Each time, “carbon” substituted for “carbon dioxide,” which he never once mentioned.

Why? Because “carbon” evokes pictures of black, sooty pollution, stuff that really is dangerous to our health. But carbon dioxide is an odorless, colorless, tasteless gas that’s essential to life. The more of it there is in the air, the better plants grow and the more food they make for animals and people. And it’s not dangerous except at levels ten to twenty times higher than today’s, for long periods, and five to ten times higher than we could ever force by burning all the fossil fuels left in the ground.

Or for one more example among many, he claimed there were “submerged countries.” But there’s not a one, and the rate of sea level rise has not accelerated significantly above the natural background rate of about .071 inch per year (7.1 inches per century) and may actually have decelerated since the start of this century.

Third, he ran roughshod over logic.

He claimed that “fourteen of the fifteen warmest years on record have occurred since the year 2000—and 2015 is on pace to be the warmest year of all,” from which we were all supposed to infer that human action causes enough global warming to justify spending trillions to mitigate it.

Assume the data that appear to show that fourteen of the fifteen warmest years on record have occurred since 2000. (There are good reasons to think they’ve been fudged.) Ignore the fact that the range among the six or eight warmest of those years is within the margin of measurement error, making it impossible to determine which is really warmest. And forget that the range is so slight as to have no detectable impact on human or other life on earth.

Still, his claim implies nothing about the current or future rate of global warming. If something rises for a while and stops, it remains at its height until it either descends or resumes its rise. Neither does it imply anything about whether human activity caused the rise before the plateau, or whether it’s wise to spend trillions trying to prevent or reduce any future rise.

But that wasn’t the worst of his illogic. He also claimed that simply going ahead and holding the climate conference in Paris, after the recent terror attacks there, constituted “an act of defiance” and a “rejection of those who would tear down our world.” Pardon me while I search feverishly around Syria, Iraq, and the rest of the Middle East and elsewhere for radical Islamist terrorists cringing in fear at that “act of defiance”!

Fourth, he ran roughshod over reality.

Obama’s autobiography, Dreams from My Father, revealed a man whose perception of himself, others, and the world is dreamlike. He is the classic narcissist, one with a Messiah complex that could boast that his inauguration as President was when the oceans stopped rising.

His rhetoric boasting that the climate summit would produce substantive, meaningful, enforceable agreements to limit “carbon” emissions was equally dreamy.

He exulted that “more than 180 countries representing nearly 95 percent of global emissions have put forward their own climate targets” and called it “progress.” But he ignored the fact that the targets are unenforceable and illusionary. They represent no significant difference from business as usual for developing nations like India and China, whose “carbon” emissions will continue to rise until at least 2030 as they (rightly) put conquering poverty above conquering “climate change.”

After all that, it’s time for a little climate realism, as expressed in An Open Letter on Climate Change to the People, their Local Representatives, the State Legislatures and Governors, the Congress, and the President of the United States of America, signed by nearly 400 people so far, including over 150 with doctorates (9 in climate science, 29 in the physics and engineering so essential to understanding how climate works) and over 100 with master’s degrees (23 in those fields).

And it’s also time for a little policy realism, as expressed in the petition Forget ‘Climate Change’, Energy Empowers the Poor.

Read them, breathe a sigh of relief, and sign them.