Cal Thomas
|
Posted: Dec 28, 2020 12:01 AM
Share   Tweet
The opinions expressed by columnists are their own and do not necessarily represent the views of Townhall.com. 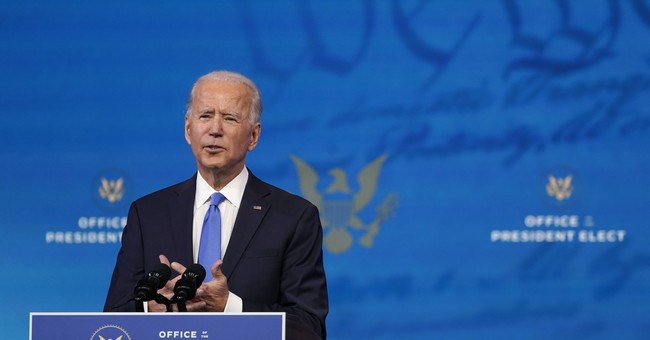 From the looks of President-elect Joe Biden's selections for cabinet positions and other high offices it seems belief in "climate change" has become a litmus test. Biden appears to have raised climate change to the level of a religious doctrine.

In naming John Kerry a climate "czar," Rep. Deb Haaland (D-NM) to head the Department of the Interior -- if confirmed Haaland would become the first Native American cabinet secretary in history, a diversity priority for Biden -- and Michael Regan, head of North Carolina's Department of Environmental Quality, who would be the first Black man to lead EPA (ditto on diversity), Biden has signaled he is all-in on using government to change the climate, which some believe is already improving because of technology and innovation in the private sector.

Here is a fundamental question: If Biden thinks government has the power to change the climate (it doesn't), why hasn't government been able to prevent hurricanes and other natural disasters?

COVID-19 is being used by politicians -- nearly all of them Democrats -- to erode our liberties. If given the power to dictate what we drive, the type of house we can live in and other freedoms we have long taken for granted, government will not be able to resist adding even more demands in the name of saving the planet.

At the 2016 World Economic Forum in Davos, Switzerland, climate change disciples laid out their vision for America's future. By 2030, some forecast:

-- The U.S. will not be the world's leading superpower.

-- A billion people will be displaced by climate change.

-- Polluters will have to pay to emit carbon dioxide.

-- There will be a global price on carbon (and) this will help make fossil fuels history.

If these initiatives are enacted, it will turn the United States into something other than what we have enjoyed for two centuries. Some comments by the Davos attendees dismissed the notion that a majority of citizens should decide such crucial matters, leaving decisions instead to unaccountable elites.

This is the stuff of dictatorships, little different from what communist leaders have done in the past, and in the present in China.

President-elect Biden has called climate change a "crisis." How many crises can we deal with at one time? I thought COVID-19 was a crisis. How about getting that under control before we start addressing climate, which is changing, but for the better in many places and provably in the U.S.

According to the International Energy Agency, a Paris-based autonomous intergovernmental organization "committed to shaping a secure and sustainable energy future for all," "The United States saw the largest decline in energy-related CO2 emissions in 2019 on a country basis - a fall of 140 Mt, or 2.9 percent, to 4.8 Gt. U.S. emissions are now down almost 1 Gt from their peak in the year 2000, the largest absolute decline by any country over that period."

Opinion polls have been all over the place on this issue. Prior to the election, an NPR/PBS News Hour Marist poll found climate change taking over the top spot of concerns for Democrats. The economy remained the No. 1 issue for Republicans with climate change not registering among those polled.

The media will join politicians and some "experts" to promote climate change during the Biden administration, including end-of-the-world scenarios with little or no scientific information that contradicts their line. Two years ago, "Meet the Press" host Chuck Todd announced he would not have any guests on who doubted climate change. This is censorship and the promotion of a single point of view constitutes indoctrination.

Implementing the Biden climate doctrine will cost a fortune and result in an outcome most Americans will not like.