Cal Thomas
|
Posted: May 28, 2019 12:01 AM
Share   Tweet
The opinions expressed by columnists are their own and do not necessarily represent the views of Townhall.com. 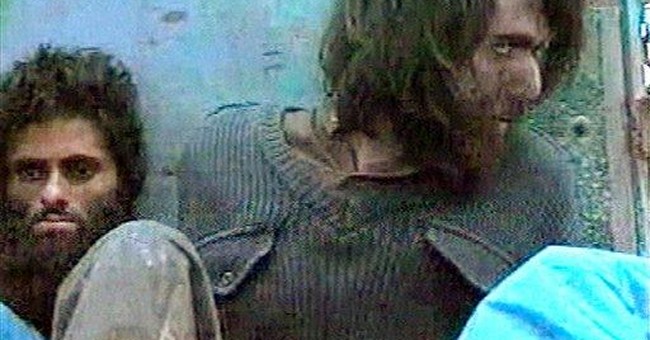 Lindh, who was paroled last Thursday from a federal prison in Terre Haute, Indiana, served 17 years of a 20-year sentence for illegally aiding Taliban forces. Lindh had joined the terrorist organization before September 11, 2001. He was in Afghanistan at the time and was also there when a group of Taliban prisoners murdered CIA officer Johnny Micheal Spann.

Spann's daughter, who was 9 when her father died, called Lindh's early release "a slap in the face" to everyone who died on 9-11. After his capture and return to the U.S., Lindh struck a plea bargain, admitting to illegally providing help to the Taliban, but denying any role in Spann's death.

Lindh is barred from traveling and using a cellphone or the internet. He could still borrow a phone and possibly use someone else's computer and sign-in information, so it is difficult to see how those limitations will be enforced.

Lindh stated he would not have joined the Taliban if he had known what it was about, but that doesn't stand up given his statements after he was sent to prison.

Foreignpolicy.com, a site that focuses on global affairs, current events and domestic and international policy, obtained a report from the National Counterterrorism Center that stated in early 2017 that Lindh "continued to advocate for global jihad and to write and translate violent extremist texts."

The document cites Federal Bureau of Prisons "intelligence summaries," which claim that in March 2016, Lindh "told a television news producer that he would continue to spread violent extremist Islam upon his release."

The document does not identify the news reporter and Foreign Policy says there is no "public record" of Lindh participating in media interviews. That doesn't mean it didn't happen, but if the interview exists, now would be a good time to see it.

Homegrown violent extremists have long been considered the most difficult to detect and monitor. Lindh's release is likely to give aid and comfort to potential terrorists already in the country and others seeking to enter the U.S.

There is no indication Lindh has repented of his actions, much less changed his ideology, or brand of Islamic extremism.

"Treason" is a word that should be used only in cases where an American citizen betrays his country and goes over to the enemy's side. Lindh fits that description.

In past American wars, some of those found guilty of treason have been executed. Lindh is a traitor and should have received the death penalty, but because of the plea deal he is now free and is likely to return to his old ways. He will be able to associate with people of his persuasion and encourage their radical beliefs and extreme behavior.

Government officials say he will be "closely monitored" by parole officers and others during the three years remaining of his sentence. What happens after that? Suppose he engages in actions that directly or indirectly result in the deaths of more Americans? Sure, he can be returned to prison and possibly even executed, but the blood of future victims will be on the heads of those who let him out.

An ideology driven by extreme religious views is difficult to combat, much less reverse. Given the ancient history of Islam and the radical behavior of those claiming to conduct terrorist activities in its name, it is not a stretch to say once one has become a terrorist, it is likely he will remain one.

Share this on Facebook
Tweet
'Justice was Served': Loudoun County Student Found Guilty of Bathroom Sexual Assault
Landon Mion
Biden Jokes to Elementary Schoolers That His Job is to 'Avoid' Answering Questions from Reporters
Landon Mion
Dave Chappelle to Transgender Community: 'I Am Not Bending to Anybody’s Demands'
Landon Mion
Father of Loudoun County Sexual Assault Victim Demands NSBA Apologize for Labeling Him a Domestic Terrorist
Landon Mion
Another Large Migrant Caravan Is Heading Towards the US: 'Tell Biden We Are Coming'
Julio Rosas
Two D.C. Police Officers Were Reportedly Told to Have Abortions to Keep Their Job
Madeline Leesman