Cal Thomas
|
Posted: Jan 09, 2018 12:01 AM
Share   Tweet
The opinions expressed by columnists are their own and do not necessarily represent the views of Townhall.com. 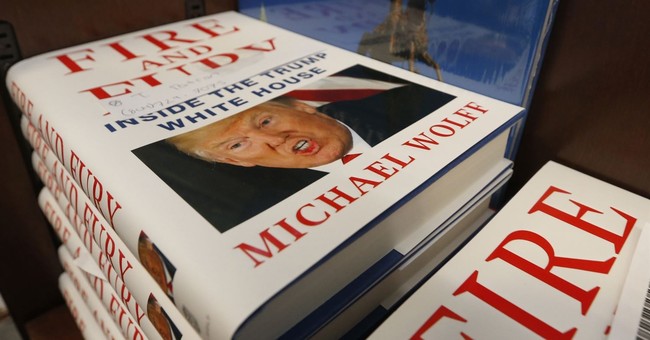 "Everybody's got to believe in something. I believe I'll have another beer." -- W.C. Fields

Having lost an election they thought they would win and unable to get over it; having been staggeringly wrong about their predictions that a Trump presidency would be the end of global economies; now putting faith in a special counsel to bring down the president with evidence that looks increasingly dubious, the left has taken refuge in the only shelter available to them: the president is off his rocker, mad, crazy, unstable and therefore the 25th Amendment must be invoked and Trump removed from office.

Is that the best they've got? Let's see them run on that platform this November and in 2020.

The latest entry to the "wild and crazy guy" Olympics is Michael Wolff, author of the instant best seller "Fire and Fury: Inside the Trump White House." Wolff claims to have interviewed 200 current and former White House insiders who all believe -- every one of them -- that the president is a lunatic and in need of a straightjacket. Wolff claims to have recordings of his "off the record" interviews. Let's hear them.

A number of current and former White House insiders, including the president, have stated publicly they were never interviewed. Some who may have been interviewed say the quotes attributed to them are wrong. Again, Wolff should roll the tape.

If what's written in "Fire and Fury" is accurately transcribed, what motivated those Wolff allegedly interviewed to undermine, even betray, the president? What did they hope to gain? Democratic administrations are not known for behaving this way. What prompted such Republican disloyalty?

In the book's prologue, as noted by Business Insider, Wolff writes: "Many of the accounts of what has happened in the Trump White House are in conflict with one another; many, in Trumpian fashion, are boldly untrue. These conflicts, and that looseness with the truth, if not with reality itself, are an elemental thread of the book."

"Sometimes," he writes, "I have let the players offer their versions, in turn allowing the reader to judge them. In other instances I have, through a consistency in the accounts and through sources I have come to trust, settled on a version of events I believe to be true."

As noted by The Washington Times: "Of course, that belief may be misplaced -- and voila, a little untruth is born. But it's up to the reader to decide. Or, the anti-Trump media and Democratic Party 'Impeach Trump' crowd, as the case may be."

People tend to pay attention only to those views and accusations that reinforce their own beliefs. Most conservatives read conservative newspapers, listen to talk radio and watch Fox News. Most liberals read liberal newspapers and watch MSNBC where programs like "Morning Joe" are mouthpieces for their liberal agenda.

The champion of conservative talk radio is Rush Limbaugh. On his program last Friday, Limbaugh got to the heart of the anti-Trump movement, which he said is establishment and therefore bipartisan.

"This is the reaction of people not in charge," he said. "These are people that have lost touch. They've lost their grip. Because Trump is threatening the little fiefdom they've created. They've set it up so that they're the experts and nobody else can possibly understand what they're doing. ... And in less than a year, Trump has come in and run rings around them, and that poses such a big threat, he's got to go."

Limbaugh noted that some of the same things being said about Trump were said about George W. Bush, i.e. that he's stupid, a cowboy and doesn't read books (Bush did, lots of them).

With so many things going well for the administration, especially on the economy, jobs, unemployment and the defeat of ISIS in Syria, it's the left that may be in need of a straightjacket. Perhaps they should just chill out and have another beer.