Cal Thomas
|
Posted: Aug 22, 2017 12:01 AM
Share   Tweet
The opinions expressed by columnists are their own and do not necessarily represent the views of Townhall.com. 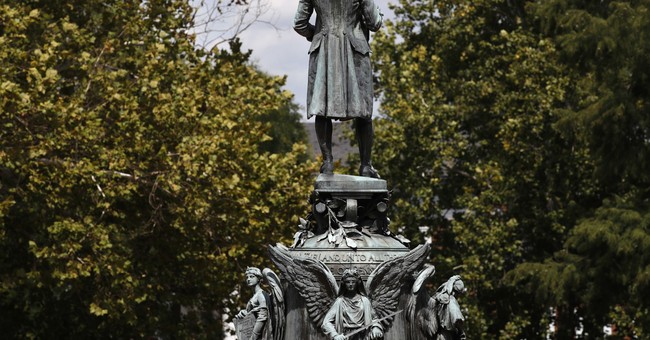 We will learn even less from history if we wipe it clean, as some are trying to do by removing statues of Confederate leaders whose beliefs about slavery and race most, including me, find offensive. Conversation beats censorship.

Rev. Al Sharpton, who has been in relative obscurity since the loss of his MSNBC program, vaulted back into this three-ring political circus recently when he suggested to Charlie Rose that federal subsidies for the Thomas Jefferson Memorial should end, because Jefferson owned slaves.

People like Sharpton fan the flames they claim need extinguishing. Some even start the fires, like those characters from a bad B-movie who confronted each other in Charlottesville, Virginia, causing death and destruction, not only to individuals and property, but to the links that have traditionally held us together as a nation, in spite of our differences.

As usual, the media have contributed to the cultural fracturing by elevating tiny groups of bigots and leftists to center stage. Drivers slow down and pay attention to car wrecks and cultural collisions.

Part of this chaos comes from government's inability, or unwillingness, to solve, or even address, major challenges. We aren't winning wars in Afghanistan, or against ISIS, which has taken credit for the vehicle attack in Barcelona that killed 14 people and wounded scores more.

We aren't winning battles over health care, or taxes, or much else in Washington, where gridlocked rush-hour traffic could serve as a metaphor for a gridlocked Congress. President Trump promised during the campaign he would win so much the rest of us would grow tired of winning. We have yet to reach anything approaching exhaustion.

There is an effort by some on the left, not just to rewrite history, which would be bad enough, but to expunge it, as happens in totalitarian states. George Orwell foresaw the danger in such an approach when he created the "memory hole" in his classic novel, "1984."

For those who never read the book, the memory hole was for destroying all historical documents that could remind, or inform, citizens of the way things were in a time before they were born. History would then be rewritten to match the evolving propaganda of the state. An agency with the euphemistic name "The Ministry of Truth" handled such things.

A similar effort to delete history was the Nazi's public book burning in Berlin in 1933.

The focus on statues by people whose education level likely wouldn't pass the "Jeopardy" test is a distraction designed to keep our minds on things other than solving real problems and to pit us against each other for the cultural, political and fundraising benefit and goals of various groups on the left and right.

I like what former NBA star and current sports commentator Charles Barkley said about the removal of Confederate statues: "I'm not going to waste my time worrying about these Confederate statues -- that's wasted energy. You know what I'm gonna do? I'm gonna keep doing great things. I'm gonna keep trying to make a difference -- number one, in the black community because I'm black -- but I'm also going to try to do good things in the world."

Barkley has the right attitude and if more of us followed his example we might actually achieve something of value for ourselves and the nation. Future generations would then find a history worth studying and emulating.