Cal Thomas
|
Posted: Apr 11, 2017 12:00 AM
Share   Tweet
The opinions expressed by columnists are their own and do not necessarily represent the views of Townhall.com. 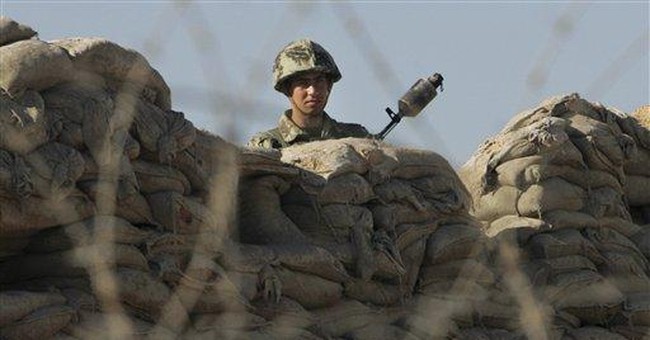 In Greek mythology, sirens were beautiful creatures that lured sailors to their doom with their hypnotic voices. In Homer's epic, "The Odyssey," ships came to ruin on jagged reefs, following siren song, the pull of the beautiful voices so strong that the hero Odysseus, in order not to succumb, commanded that his crew lash him to the mast of his ship, and not untie him, until they were in safe waters.

After repeatedly criticizing President Obama for his Middle East policy from which candidate Donald Trump said America got nothing in return, President Trump ordered a missile strike on a Syrian airbase reportedly used to launch chemical weapons attacks. Some on the right are beating their chests claiming this is a demonstration of leadership. To what end? Does anyone believe that Bashar al-Assad will not continue killing Syrians by other means?

Last week during meetings with King Abdullah of Jordan, the New York Post writes, "a report revealed that the administration wants to host a Mideast summit between Israel and the Palestinians as soon as this summer." Trump said he and Abdullah would "advance the cause of peace in the Middle East, including peace between the Israelis and Palestinians."

Since Palestinian leaders dating back to Yasser Arafat, along with terrorist groups like Hezbollah (and ISIS), have vowed never to make peace with Israel, that can only mean one thing: pressure on Israel to "do more" by relinquishing additional territory to her enemies and watching as those enemies use that territory to advance their timetable for the eradication of the Jewish state.

When I asked Sarah Stern, President of the Endowment for Middle East Truth, a pro-Israel think tank and policy center based in Washington, D.C., about this, she responded in an email: "After all of these years of experience in the Middle East, it is about time that we realize that the Israel-Palestinian dispute does not lay at the root of the problem. ... It is rather the growth of radical Islam and a 14-century-old Sunni versus Shiite divide, coupled with the breakdown of the arbitrary lines drawn by the Sykes-Picot agreement, which amalgamated various tribal, feuding factions into nation states, where there was no common denominator."

The Sykes-Picot Agreement, commonly known as the Asia Minor Agreement, was a secret 1916 deal between Britain and France, with the assent of the Russian Empire; to arbitrarily carve up the region into spheres of influence should the Triple Entente succeed in defeating the Ottoman Empire. In 1921, Winston Churchill, Herbert Samuel, the head of Britain's Liberal Party and Abdullah I of Jordan, met in Jerusalem and redrew the lines of the Levant, ensuring the conflicts that have raged even before the 1948 re-establishment of Israel in its ancient homeland where Jews have always lived, despite Palestinian and Arab efforts to rewrite history.

Every American president since Dwight Eisenhower has tried to reduce conflict and bring peace to the region. But peace can only be achieved when people decide not to fight and kill each other anymore. That's what happened in Northern Ireland, but it's a long way from happening in the Middle East, especially when those committed to Israel's destruction find hope in "summits" and meetings they use to pressure Israel into, in effect, committing suicide by making agreements her enemies, who believe they have a religious mandate, have not and will not live up to.

Only a president with the power God gave Moses to part the Red Sea could do something as miraculous as bring peace to the Middle East. Even a brief review of history proves the conflict between Israel and the Palestinians is not the cause of instability. Arabs were fighting Arabs before 1948 and conflicts between Sunni and Shia Muslims have nothing to do with Israel.

If Trump thinks he can be the ultimate peacemaker, he's listening to siren song, and heading for the reef.