Cal Thomas
|
Posted: Jan 26, 2017 12:00 AM
Share   Tweet
The opinions expressed by columnists are their own and do not necessarily represent the views of Townhall.com. 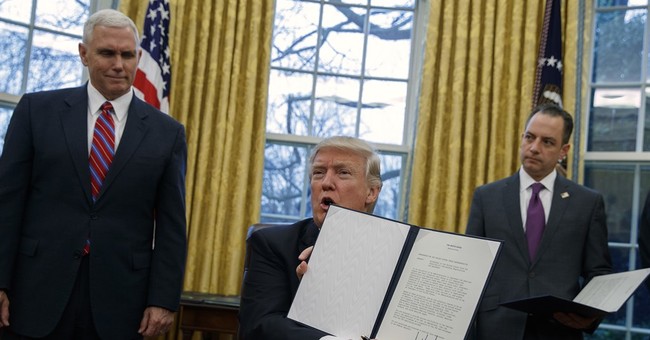 It's a new day

It's a new life

President Trump's critics are finding it difficult to stay focused following a flurry of actions taken by the new American CEO.

In just the first two working days of the new administration, the president has signed an executive order withdrawing from the negotiating process of the Trans-Pacific Partnership (TPP), aligning him with socialist independent Sen. Bernie Sanders (I-VT) and Sen. Sherrod Brown (D-Ohio), who broke with former President Obama over the agreement. Sen. John McCain (R-AZ) and Barack Obama oppose withdrawal. Strange bedfellows, indeed.

Trump has also reinstated the Mexico City Policy, which, writes CBS News, "required nongovernmental organizations to agree as a condition of receiving any federal funding that they 'would neither perform nor actively promote abortion as a method of family planning in other nations.'" In addition, House Republicans say they will move to make the Hyde Amendment, which prevents the use of taxpayer dollars to pay for abortions, except to save the life of the woman, or if the pregnancy arises from incest or rape, permanent. They also plan to cut off federal funds from Planned Parenthood.

On Tuesday, Trump signed another executive order to advance the Keystone XL and Dakota pipelines. The Obama administration and environmental groups had opposed both projects, claiming they would harm the environment and contribute to America's reliance on fossil fuels. Until alternative fuels are sufficiently available to replace fossil fuels, we should use what we have and wean ourselves totally from Middle East oil.

Taking a page from Abraham Lincoln and his "team of rivals," Trump met Monday not only with a group of business executives, but also with union heads, who had endorsed Hillary Clinton for president. Trump told both groups he wants to create jobs, especially for the middle class. The union heads came out of the meeting in support of the president's goal. When was the last time you can recall a union leader praising a Republican president?

It's a new day for the media, too. Sean Spicer, the White House press secretary, signaled on Monday that the relationship between the White House and media is changing. Spicer announced that he would provide access via Skype to journalists working for news organizations "who may not have the convenience or funding to travel to Washington."

By selecting reporters who rarely get to ask questions inside the briefing room and ignoring some who do (liberal newspaper reporters and broadcast and certain cable outlets), Spicer sent a signal that journalists who come at a Republican president from the left will no longer enjoy preferential treatment, which means the public might actually get useful information.

In the early days of this administration, President Trump has shown he intends to follow through on his campaign promises. He believes -- rightly -- that in the past Republicans, even in the rare times when they have controlled all three branches of government as they do now, have been intimidated by Democrats and their media friends and cowered when faced with opposition and criticism.

There will be more changes to come, including a nominee to the Supreme Court, action on school choice, which allows poor kids to escape failing schools, a new and more successful approach to fighting terrorism, immigration reform that, for starters, expels criminal aliens, properly vets those coming into the country and significantly reduces the flow of illegal immigrants. Who knows, we might even get a credible foreign policy that puts American interests first and no longer tries to impose American values on nations that have no foundation in democracy or religious and political pluralism.