Cal Thomas
|
Posted: Jan 14, 2017 12:01 AM
Share   Tweet
The opinions expressed by columnists are their own and do not necessarily represent the views of Townhall.com. 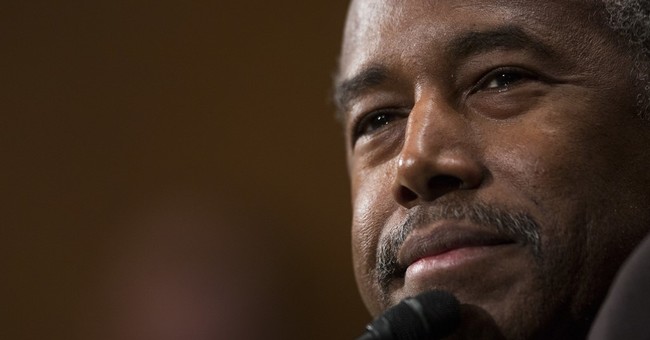 During his Senate confirmation hearing, Dr. Ben Carson, secretary of Housing and Urban Development-designate, told a story. He said his mother was a domestic who cleaned beautiful homes. One day she asked him if he would rather live in those nice houses or the house in which he and his brother lived in Detroit. She told him that only he could decide the type of home he would eventually live in by how much he studied in school and the choices he made for his life.

Thus motivated, Carson said he went from last in his class to first, and people who used to call him "dummy" started asking him for help with their schoolwork.

He also said people used to tell his mother she could receive welfare payments, but she refused them, believing she could make it on her own without the government.

Carson said people on welfare are not "bad people," they just don't know any other life. He said he wants to take a "listening tour" of America to find out from people how best government can serve them and by implication how much more they can do to help themselves.

Stories about overcoming adversity, discrimination and poverty should be at the heart of the incoming Trump administration. It isn't that government is all bad, as Carson stated, but that government is doing things it should not be doing. That is why it has become bloated, dysfunctional and detached from everyday Americans.

Carson spoke of the poor as "human capital." When was the last time anyone said something like that? Possibly it goes back to the days of HUD Secretary Jack Kemp, who did what Carson proposes by showing up at public housing projects and listening to the people who live there. Everyone has a story. Some are very sad stories, but they don't have to be the final chapter in one's life. Bad conditions can be bettered. Inspirational stories like Carson's can lead to change.

The rap against Carson is that he has no government experience. That should be considered an asset, not a liability. Unlike many top government officials who have enjoyed a life of privilege, Carson knows what it is to grow up in poverty. That experience will count as he travels around the country telling people how they might overcome their circumstances today instead of someday.

Ben Carson is one of two people who could be this administration's and the Republican Party's greatest asset when it comes to reaching the poor. The other is secretary of Education-designate Betsy DeVos, whose strong advocacy for school choice can liberate poor children from failing public schools, giving them a decent education, which is the ticket to success for anyone. Perhaps DeVos can make her own tour of failing public schools and shame those Democrats who have refused to let underprivileged children escape, while sending their own children to elite private schools.

Two quotes from Dr. Carson reflect an attitude that will serve him and the people who need decent housing well. One is: "It doesn't matter if you come from the inner city. People who fail in life are people who find lots of excuses. It's never too late for a person to recognize that they have potential in themselves."

The second is: "Our children need to see and hear about more black role models in many fields so they can make better choices."

Ben Carson could be the role model those striving to better themselves have been waiting for. Let's wait and see.