Chicago Carnage: What Can Be Done?

Cal Thomas
|
Posted: Jan 05, 2017 12:01 AM
Share   Tweet
The opinions expressed by columnists are their own and do not necessarily represent the views of Townhall.com. 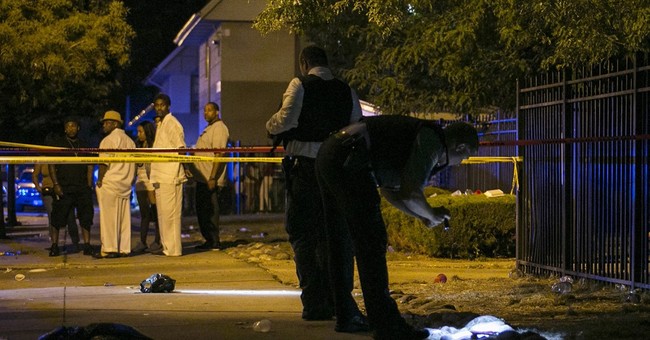 Chicago has come a long way from the idealized lyric "my kind of town, Chicago is," which Frank Sinatra made famous.

True, Chicago has a history of gangland murders going back to the days of Al Capone, but 2016 set a new and lamentable record. According to CNN, citing figures released by the Chicago Police Department, Chicago experienced a surge in violent crime in 2016. There were 762 murders, 3,550 shootings and 4,331 shooting victims. This in a city with strict gun laws.

Most of the violence is gang-related. Fatherless kids seeking a sense of belonging and family are attracted to gangs they believe will give them both. The musical "West Side Story" contains these Stephen Sondheim lyrics, which offer a rationale for gang membership:

You're a Jet all the way

From your first cigarette

To your last dyin' day.

When you're a Jet,

If the spit hits the fan,

You got brothers around,

You're a family man!

You're home with your own:

Except you're not well protected, as the murder rate proves.

President-elect Donald Trump has said if city officials can't deal with the violence, the federal government might have to step in. There may be a better way.

Last summer, a coalition of religious groups organized a summit of gang leaders in Los Angeles. They met at the Church of Scientology, which many regard as a cult, but it shouldn't matter if results are achieved. They appear to have succeeded, or at least begun a process that may lead to more peaceful streets.

Attendees signed a "peace banner," which declared peace between two of the most notorious gangs in the area, the Bloods and Crips. A rapper named "The Game" may have had the best line of all. He wrote: "Because the sad truth that no one wants to face is, before we can get OUR LIVES TO MATTER to anyone else ... We have to show that OUR LIVES MATTER to US!!!!"

The Los Angeles Times reported a comment by Michael "Big Mike" Cummings, a gang-intervention worker in Watts, who said he is "sick and tired of losing our babies," adding, "The only thing that needs to be divided by colors is our laundry."

This strategy might work in Chicago, too. Last month the Aurora Beacon-News reported on a former gang member, Manny Rivera. Now 34, Rivera joined a gang at age 14 shortly after meeting his father for the first time. At 22, Rivera was shot by a rival gang member and later spent more than a year in prison for stealing a car. When he got out he asked the gang leader if he could resign. That does not happen often, but in Rivera's case it did. He said the gang leader told him he could leave, but if he ever decided to come back there would be consequences.

Rivera, who met his wife when he was 16, -- she stuck with him in spite of his associates -- now pastors a church following his Christian conversion. On Dec. 31, Rivera participated in an anti-violence march in Chicago. Many marchers carried handmade wooden crosses, one for each person murdered in the city during the year. Rivera now seeks to lead others to know God and find love and acceptance in Him instead of gangs.

While the federal government cannot prefer one religion, it can encourage and provide resources to churches and religious groups who seek answers to a problem that has defied secular solutions. A changed heart almost always results in changed behavior and clearly the police, the incarceration of violent offenders and stricter gun laws are not reducing the level of violence. As Donald Trump said in appealing to African Americans voters, "What do you have to lose?" They've tried the Democrats for more than 40 years. Why not try something new?