Cal Thomas
|
Posted: Nov 05, 2016 12:01 AM
Share   Tweet
The opinions expressed by columnists are their own and do not necessarily represent the views of Townhall.com. 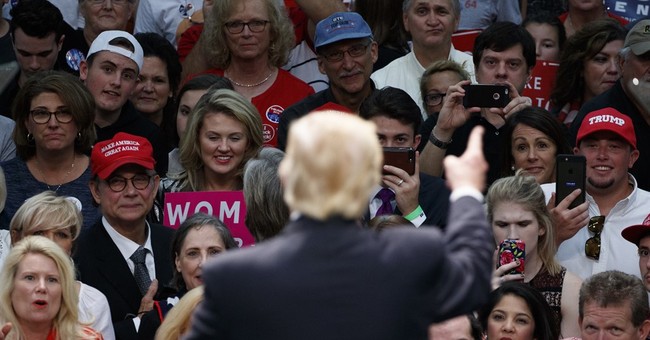 As a former "Never Trump-er," I have been interested in others who have converted, however reluctantly, if not into Trump supporters, then pragmatic accepters of Trump against Hillary Clinton. Call us ever-Trump-ers.

Another such convert is Joel C. Rosenberg, the mystery writer who once worked for the late Rep. Jack Kemp (R-NY) and former Secretary of Education William Bennett, conducted research for Rush Limbaugh, and now writes biblically-themed novels.

Writing on his blog, Rosenberg gives 10 reasons why he intends to vote for the Trump-Pence ticket. They are mostly about stopping Hillary Clinton and her secular-progressive agenda, which he believes would complete the moral, economic and political destruction of the country. In addition, he writes, "Hillary and her advisers may have committed federal crimes." A Hillary victory, he believes, guarantees nonstop investigations, possibly leading to indictments, though President Obama could and probably would pardon her of any and all acts committed while she was secretary of state should she win.

While Rosenberg writes he "continues to have deep reservations about Mr. Trump ... Hillary Clinton is the poster child for politics as usual at a time when we need change." Most of the rest of his arguments -- from federal judges, to rebuilding the American military, to protecting our borders are familiar. He also thinks Trump's running mate, Gov. Mike Pence, will soften some of Trump's sharper edges.

Jerusalem Post columnist Caroline Glick is another person who has reluctantly come around, if not in open support of Trump, then in explaining why he has gained so much favor. She writes: "After eight years of Barack Obama's White House, America is in a different place than it was in 2008, when Obama ran on a platform of hope and change. Americans today are angry, scared, divided and cynical."

The stakes in Tuesday's election could not be higher. They are about life for the unborn and elderly, the Constitution, growing the economy and the private-sector jobs that accompany growth, advancement or retreat of the LGBTQ agenda, the strength of our military, terrorism, immigration, a government-run health care system that will inevitably follow the crumbling of Obamacare, restoring respect for the United States abroad and so much more.

We Trump converts are not unaware of his many flaws, but none of his flaws come close to the alleged crimes committed by Hillary Clinton and her husband, including "pay for play" activities at the Clinton Foundation, which FBI investigators have been looking into for at least a year.

With a President Trump and especially Vice President Mike Pence, America has an opportunity to go in a different direction. Trump has been specific about his promises and if the Congress remains in Republican hands, members can hold him to them.

Maybe Trump is like the box of chocolates Forrest Gump referred to -- we won't know what we are getting until he becomes president. But we know what we would get with Hillary Clinton as president: more corruption, possible indictments, if not of her then of some of her closest aides, and a continuation of the Obama agenda, which, along with the Republican wing of the establishment, has been the cause of so much citizen angst and anger.