Cal Thomas
|
Posted: Sep 22, 2016 12:01 AM
Share   Tweet
The opinions expressed by columnists are their own and do not necessarily represent the views of Townhall.com. 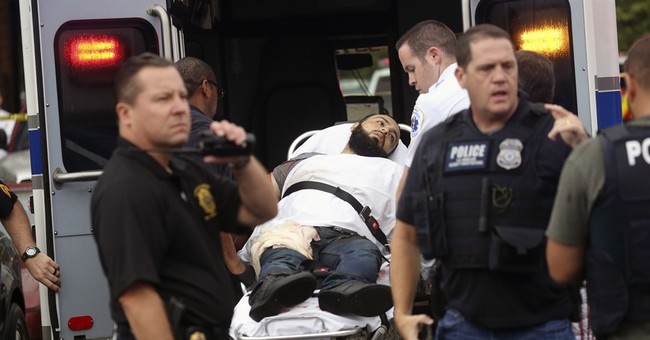 In Florida Monday, following the bombings in New York and New Jersey, Donald Trump referred to the captured bombing suspect, Ahmad Khan Rahami, as an "evil thug." He then added, "Hillary Clinton is a weak and ineffective person and I will tell you, if you choose Donald Trump, these problems are going to go away far, far greater than anybody would think."

Whatever one thinks of Trump's rhetoric, his is a voice of certainty at a time when a growing number of Americans appear fed up with a seemingly ineffective government, weak statements and even weaker responses. Example: Josh Earnest, the White House press secretary, said on CNN: "What I can tell you is that we are, when it comes to ISIL, we are in a fight, a narrative fight with them, a narrative battle."

Are words the cause of so many American deaths from terrorists attacks and on battlefields in Afghanistan, Iraq and now Syria? Or did bombs and bullets take their lives, limbs, minds and sense of well-being?

Many Americans believe their government cares more about the sensitivity of Muslims than it does for them. From releasing detainees from Guantanamo prison, some of whom have gone on to plot terrorists attacks against Americans, to the acceptance of thousands of refugees from Islamic countries where terrorism appears to be a major export, people are rightly concerned.

Adding to those justifiable concerns is this Associated Press story: "The U.S. government has mistakenly granted citizenship to at least 858 immigrants who had pending deportation orders from countries of concern to national security or with high rates of immigration fraud, according to an internal Homeland Security audit." Why? The Department of Homeland Security says their fingerprints were missing from government databases.

This is the same administration that promised "robust" vetting of all immigrants. It's not the kind of storyline that builds confidence among a populace that is increasingly skeptical about their government's ability to protect the homeland.

Many people are afraid to say what should be said for fear of being labeled an "Islamophobe." Those who deny the threat of Islamic extremism in this country are quick to brand those in opposition with that term, even though in many cases their only sin is taking seriously the virulent rhetoric of racial Islamists, who blatantly admit to wanting to destroy western countries, especially the United States.

Srdja Trifkovic is not afraid. He is a Serbian-American writer on international and foreign affairs and editor of the "paleoconservative" magazine Chronicles.

In the September issue Trifkovic writes: "The enemy is Islam, a supremacist ideology of permanent conflict and conquest, which is and has always been structurally unamenable to compromise with non-Islam. It has a highly developed legal, political, and moral doctrine, rooted in its core texts, which denies the legitimacy of any other belief system and form of social organization. Its exponents are state actors (most notably Saudi Arabia), groups with some state attributes (ISIS), decentralized terror networks (Al Qaeda), and self-starting 'radicalized' cells and individuals in most Western countries that have a sizable Muslim diaspora."

All Muslims do not buy into these doctrines, but those who don't are regarded as heretics by those who do. Don't take my word for it. Do the research. The motives and goals of radical Islamists are in their writings, sermons and media.

The latest terrorists attacks, and the possibility of more to come before the election, can only benefit Donald Trump. While some politicians wring their hands, Trump wants to wring necks. His is a voice of certainty amid voices of timidity. Whether good or bad, that resonates with a lot of people who don't enjoy life in that safety bubble protecting our elected officials.

Americans are tired of losing wars. This one they want to win. To those who want to win, Trump is Gen. Patton. Hillary Clinton reminds them of a conscientious objector.