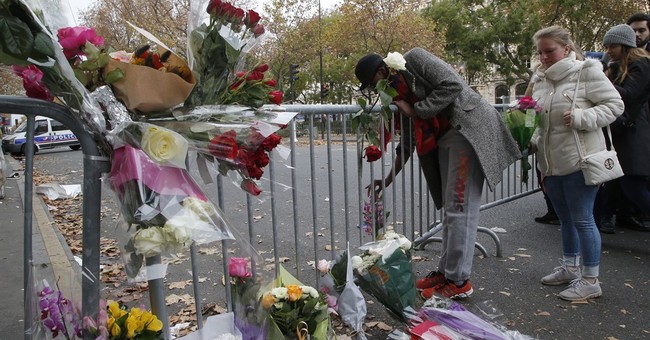 Just hours before the terrorist attacks in Paris last week, for which ISIS has claimed responsibility, "Good Morning America" broadcast an interview with President Obama. In it, the president told host George Stephanopoulos, "I don't think they're gaining strength. What is true is that from the start, our goal has been first to contain and we have contained them. They have not gained ground in Iraq, and in Syria they'll come in, they'll leave, but you don't see this systemic march by ISIL across the terrain."

Maybe, but they've gained ground in Europe and most likely in America. Incredibly, the president wants 10,000 Syrian "refugees" to be admitted to the U.S. on top of the 1,854 who are already here.

The president has referred to ISIS (or ISIL, as he prefers) as the "jv," or junior varsity. It appears now that they've made it to the "varsity" level.

Where to turn for leadership to fight and defeat this clear and present danger to civilized society? Certainly not to President Obama, who has been in denial his entire presidency about the global threat we're facing. The president has consistently refused to use words like "Islamic terrorism" or "Islamism" to describe the belief system motivating these killers. It is difficult to fight, much less prevail, over an enemy one refuses even to name.

ISIS will not be defeated with guns and bombs alone, or even mainly. Their soldiers have a religious purpose. Their diagnosis of the West's decadence is correct. Their solution -- Sharia law -- is not. During Saturday's Democratic presidential debate, Hillary Clinton said non-Islamist Muslims must take the lead in fighting and defeating this scourge. The question is, will they? We have seen our failure in Iraq, Afghanistan and Syria to train sufficient numbers of Muslim soldiers to fight the Taliban and ISIS. In too many cases they have turned on their trainers, defected to the other side or cut and run when faced with the more highly motivated and combat experienced enemy.

At a minimum, we need to track down and deport those from the Middle East who are in the U.S. on expired visas. Then we have to bar any more from coming in, as the Republican governors of Michigan and Alabama have vowed to do. Other governors should do likewise if the president won't act. Additionally, to the extent that it is possible, anyone who leaves the U.S. for a country where there are terrorist training camps must not be allowed to return, even if they have a U.S. passport. This will be difficult as some travel to supposedly friendly countries like Turkey and then slip across the border into Syria without a passport stamp.

Hillary Clinton was asked during the latest debate how she would screen Syrian refugees coming to the United States. She replied that while the Obama administration wants to take 10,000 refugees from Syria, "I said we should go to 65 (thousand), but only if we have as careful a screening and vetting process as we can imagine, whatever resources it takes. I do not want us to in any way inadvertently allow people who wish us harm to come into our country."

That is wishful thinking. There is no way to be certain that any or all of them are not jihadists. ISIS has openly bragged about including jihadists among those who have fled to Europe and only a fool would believe that same strategy is not being applied to America.

This is important and it ought to transcend partisanship. ISIS and other terrorists don't discriminate between political parties, or religions. They also kill Muslims who don't agree with them.

This is a generational war and it won't be won with platitudes about how ISIS doesn't represent true Islam. That's an argument for theologians and academics. The reality is that those who are engaged in mass murder believe it does and the consequence of refusing to take them seriously is more killing.

Islamists have a purpose. We seem to have lost ours.