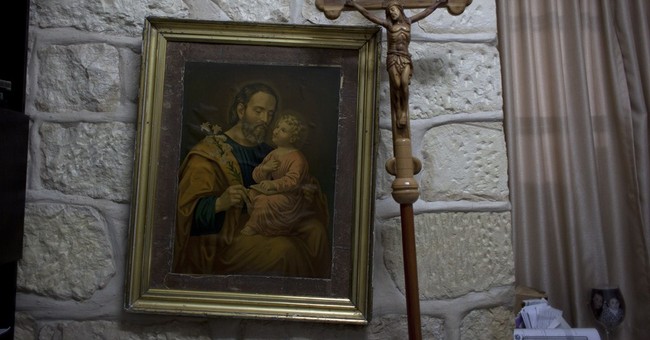 American Christians have been slow to the point of near silence when it comes to speaking out about the atrocities committed against their fellow believers by the Islamic State in Iraq (ISIS). The Jewish people are much better models in solidarity when Jews are persecuted.

Members of ISIS have targeted Christian churches, destroyed symbols of Christian faith and killed Christians because of their beliefs, but from American Christians we hear very little. Even President Obama, a self-described Christian, rarely speaks about the persecuted.

Reality television producer Mark Burnett and his actress wife, Roma Downey, are trying to raise awareness and money to help displaced and threatened Iraqi Christians who survived the genocidal attacks against them.

Burnett and Downey, who produced the highly-rated "The Bible" for The History Channel and are working on another biblical epic, "A.D.", which NBC will broadcast next Easter season, have announced a campaign to raise $25 million to aid homeless Christians in the region with housing, food and clothing. They say they are donating the first $1 million and have set up a website called "The Cradle of Christianity Fund" through which people can give. They promise the money will go directly to the churches for distribution to those in need.

Twenty-five million is more than the European Commission's entire 2014 humanitarian budget of $17 million euro ($21.6 million USD), which goes to aid "internally displaced Iraqis in the country and Iraqi refugees in Jordan and Lebanon."

Johnnie Moore, Mark Burnett's chief of staff, recently returned from the region. In an email he reports, "The need is simply overwhelming. There are over 800,000 displaced people in Kurdistan alone. According to the United Nations, if it operates at 100 percent efficiency, it can only take care of 40 percent of these desperate people."

In a cruel twist to the Book of Exodus story about Jews marking their doorposts in Egypt with blood so they would be passed over when the Angel of Death struck down every firstborn male, Christian homes across northern Iraq have been marked by ISIS fighters with the Arabic letter for "N," which means Nazarene, a reference to the hometown of Jesus. They have reportedly been given a choice: convert to Islam, leave the country, or be killed.

As Moore writes: "In the northern Iraqi town of Mosul (where Jonah is buried) most (Christians) fled in the middle of the night, before the evil arrived, with nothing but the clothes on their backs. And now winter is coming. For the first time since the 4th century -- when a monk named Matthew fled Roman persecution and established a monastery in Mosul -- there is no church in Mosul. Make no mistake, this is evil's goal for the region ... a goal that will be achieved if good people do nothing."

Fighting ISIS and other branches of Islamic extremism will take more than airstrikes. Iraqi Christians need to know that not only American Christians, but Jews and people of other and no particular faith stand against genocide with more than statements of condemnation.

Hollywood celebrities are known for promoting humanitarian efforts. Helping Iraqi Christians should be included in that work and not limited just to Christians. Jews and people of other faiths, or none, should fight evil deeds with good deeds. If one faith is under attack and there is little or no pushback, other faiths are potential targets. Only light can dispel darkness.

The One these Iraqi Christians follow warned of persecution for those who proclaim His name. That does not excuse anyone from remaining silent when persecution occurs.

If American Christians won't help their Iraqi brethren, who will? If they refuse to help, the terrorists win. My online contribution is on the way.