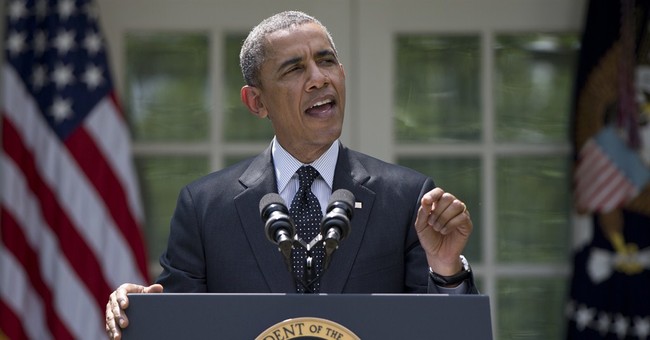 George W. Bush never claimed to be prescient, but here he is in 2007, warning us what would happen if the United States prematurely pulled its troops out of Iraq before Iraqi forces were sufficiently trained, equipped and motivated to defend the country we gave back to them after the ouster of Saddam Hussein:

"To begin withdrawing before our commanders tell us we're ready would be dangerous for Iraq, for the region and for the United States. It would mean surrendering the future of Iraq to al-Qaida. It'd mean that we'd be risking mass killings on a horrific scale. It'd mean we'd allow the terrorists to establish a safe haven in Iraq to replace the one they lost in Afghanistan. It'd mean we'd be increasing the probability that American troops would have to return at some later date to confront an enemy that is even more dangerous."

President Obama is proving Bush right, sort of. He is deploying 275 troops back to Iraq, not for combat, but to secure American assets there and protect those in the U.S. Embassy. We will not engage. We will secure and protect. Won't that make a charming picture for America's enemies -- the "Great Satan" retreating in the face of a few thousand members of "Allah's army"? It will serve as a productive recruiting film for more jihadists to come join the fight.

The most powerful nation on Earth, supposedly, has arrived at this embarrassing moment precisely because we refuse to use that power with sufficient force and commitment. America's enemies know the will of the American people has a relatively short shelf life. We tire too quickly, preferring to focus more on celebrity culture then on those who have vowed to destroy us. We are weary of war. If the same standards we use for fighting wars today were applied in World War II, Nazi Germany would have won.

Restrictive rules of engagement have also weakened the ability of American forces to defend themselves and achieve their objectives. Too often soldiers are told they cannot fire unless fired upon, which has likely led to the killing and wounding of U.S. soldiers. Pre-emptive strikes appear to be things of the past.

Jihadists have long hid among civilians, knowing of America's (and Israel's) reluctance to cause collateral damage. The jihadists know this, and endangering civilians appears to have become central to their strategy. When civilians are killed (or even when some pretend to be dead for propaganda purposes) and their pictures are put on TV and the Internet as proof of the West's ferocity and heartlessness, it can lead to the weakening of Western resolve and cause political damage to those in office.

Enemies and adversaries of the United States no longer fear this country. Under President Obama, people like Russia's Vladimir Putin, dictators like Syrian President Bashar al-Assad and jihadists of no known national origin (though increasing numbers of Westerners, including some Americans, are joining them), see an opportunity for chaos created by a president who appears to think "climate change" is a greater threat to the world than terrorism. If President Obama fought terrorism with the same zeal he devotes to "climate change," the terrorists might be the ones retreating, not America.