What Will Happen to Afghan Women When the Taliban Returns? 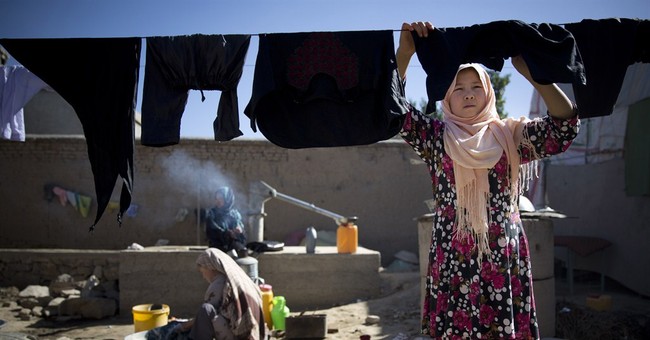 When the withdrawal of American troops from Afghanistan is completed next year what will happen to Afghan women? Will a resurgent Taliban return them to wearing burqas, withdraw them from schools and force them to live behind painted glass in their homes, permitting them to leave the house only when accompanied by a blood relative?

The Afghan constitution contains language that supposedly protects women's rights and Afghanistan has signed several international human rights treaties that guarantee protection for women. Article 22 of the Afghan constitution reads, "Any kind of discrimination and privilege between the citizens of Afghanistan are prohibited. The citizens of Afghanistan, whether man or woman, has equal rights and duties before the law."

To Westerners, this sounds good, but in Afghanistan, as in much of the rest of the Islamic world, religion can trump any constitution.

Mavis Leno (wife of "The Tonight show's" Jay Leno) chairs a committee of the Feminist Majority Foundation (FMF) on Afghan women and girls. In a telephone interview, she tells me she is "worried sick" about diplomatic negotiations with the Afghan government and fears the Taliban could again leave women at a disadvantage: "Women are last in and first out. For years we have been the throwaways in any agreement."

Leno doesn't trust any agreement involving the Taliban: "I don't believe they would consider themselves contractually, morally or in any other fashion bound by any agreements they made with us, or any of our allies. That is not their history and I don't believe for one minute they are going to change because it's their belief system."

It's another reason to leave a formidable contingent of U.S. forces in the country, as long as they can defend themselves and promote democracy and human rights for all Afghan citizens.

Leno and the FMF are offering college scholarships and training to the women and girls they bring to America. Currently, she says, between 20 and 30 are receiving help. Women from rural areas in Afghanistan are taught to be midwives, which not only saves lives, but gives the midwives "status" in their communities because they have acquired a useful skill.

While education for Afghan females has improved since U.S. troops removed the Taliban from power, the United Nations Entity for Gender Equality and the Empowerment of Women reports: "Only 26 percent of Afghanistan's population is literate, and among women the rate is only 12 percent. Among school-age children, 38 percent (4.2 million in real numbers) do not have access to schools, most of which are girls."

Add to this the scarcity of buildings and other necessities, and adds Leno, "the dearth of textbooks, teaching materials and equipped laboratories" and the challenge would be great even without the threat of a Taliban return.

The Afghan parliament failed to pass a law prohibiting violence against women, which Leno sees as an ominous warning. The government, she says, has also "eliminated domestic violence centers, such as those run by Women for Afghan Women."

The United States has invested billions of dollars and the lives of nearly 2,100 service members in Afghanistan. To allow Afghan women to be forced to return to subservience to a male-dominated religious fundamentalism would mean they died in vain.

This should not be an issue limited to a feminist organization. It should be something about which all Americans must care. Google "help for Afghan women" and contribute to an organization with which you are comfortable. We owe it to those who have died and were wounded. It can be our continuing gift, not only to Afghan women, but to all of humanity.