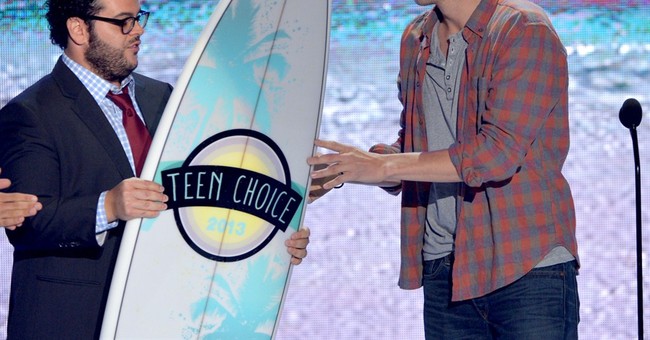 Ashton Kutcher, the 35-year-old actor and ex-husband of actress Demi Moore, has never been considered a poster child for the "family values crowd," but at the Teen Choice Awards two weeks ago, he could have easily passed for one.

Following screams from young female fans in the audience, Kutcher silenced them with a motivational message that bordered on inspiration. He told them: "I believe that opportunity looks a lot like hard work. ... I've never had a job in my life that I was better than. I was always just lucky to have a job. And every job I had was a steppingstone to my next job, and I never quit my job until I had my next job."

Kutcher wasn't through: "The sexiest thing in the entire world is being really smart and being thoughtful and being generous. Everything else is c--p ... that people try to sell to you to make you feel like less. So don't buy it. Be smart, be thoughtful and be generous."

That such remarks would gain so much attention is indicative of where we are as a nation. One way to take the cultural temperature is to observe how ancient wisdom suddenly sounds new, even radical. Not many Millennials are hearing this message. Maybe some get it from their parents, but many teens and young adults don't discover such wisdom until they are parents, if then.

For older adults, Kutcher's remarks are so obvious that when they were teens they would have been unremarkable and nearly universally believed, if not always practiced. They resonate today because of the dire condition of the nation's economy and because of moral libertarianism -- whatever feels good goes; whatever works for the individual is right, even if the good of society suffers. More and more people seem to be looking for a lifeline. Kutcher threw them one.

Radio host Rush Limbaugh said of many of today's young people: "There is a fog of depression ... There's pessimism ... and it's because they do not think there's any prosperity left for them. ... They don't think there's any money to be earned; it's all gone. Their parents' and grandparents' generation were the last ones that really had it made. And they're certainly not hearing this kind of message from anybody in politics that they vote for."

Kutcher has described himself as "a fiscally conservative, socially liberal independent." He supports gay rights and same-sex marriage. Though raised a Roman Catholic in Cedar Rapids, Iowa, he has dabbled in Kabbalah, a form of Jewish mysticism. No one can typecast him as a soldier for religious conservatism. He is a supporter of President Obama, but doesn't like his health care plan.

The road to success remains what it has always been: hard work, believing in yourself, never taking "no" as the final answer and making right moral choices. These have been proven throughout history to better any life and improve even the worst of circumstances.

If we know such things to be true, why are they not taught and modeled in today's culture? For many, it could lead to less reliance on government. Politicians would become less necessary. If such principles were again taught in our public schools, someone might sue for imposing someone's "moral values" on others.

Envy, greed and entitlement are the unholy trinity of failure. What Kutcher offers young people is the opposite, leading to success, self-realization and independence.

If only Washington politicians would think and talk this way.