Breakout From Politics of The Past 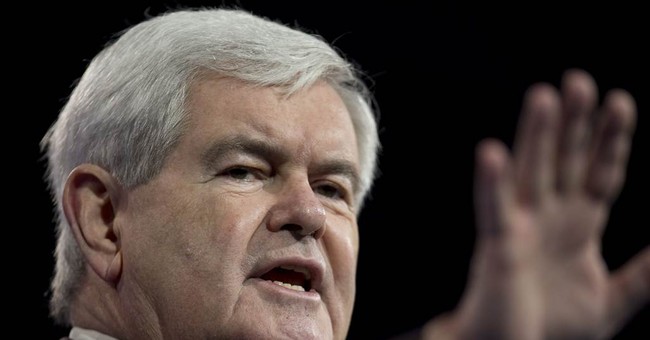 That is not a winning strategy for political victory. Neither are appeals to a bygone era that is unlikely to return. The social, financial and governmental dysfunction we are experiencing are symptoms of something far deeper. The foundations that built and have sustained America are being destroyed. Too many Republicans and conservatives mistakenly believe what's needed is a paint job, like those false storefronts painted on closed-down businesses in some Northern Ireland towns to hide its struggling economy during the G8 summit.

Instead of more navel-gazing, Republicans and conservatives (they are not always the same) must seize the future rather than hold on to the past.

Former House Speaker Newt Gingrich believes America may be on the verge of another major breakthrough on several levels, but he warns in a book titled Breakout to be published this fall (Regnery Publishing, Inc.) about powerful forces opposed to the advance. "Prison guards of the past," he calls them, as opposed to "pioneers of the future." If the future has publicists, he says, the past has lobbyists.

Gingrich believes, and polls reflect this, that people are weary of the left-right, Republican vs. Democrat repetitive drama. He thinks the next decade will be more future vs. past.

What is needed, he says, "is a movement dedicated to identifying and encouraging the pioneers of the future," while fighting for the policies and structural changes that will hasten its arrival. He labels it the "Breakout Party," though he thinks this shift can still be achieved within the GOP.

Gingrich says a breakout occurs when "so many different new scientific and technological capabilities are emerging and being translated into usable products by entrepreneurs in a dynamic consumer-led market that the very capacity of life, for the individual, for society, for business, and for government, are changing."

Neither party has a clear understanding of what this can mean for the country. Neither, says Gingrich, does either party have a strategy for knitting together a coalition of these pioneers who are already creating the future, but largely under the media's radar. The media could be said to be one of the "prison guards," because they mostly focus on the old arguments rather than on solutions.

Here are two examples of what he is talking about. Instead of focusing mainly on caring for the sick, the emphasis should be on finding cures for diseases, like Alzheimer's and cancer, which are costly to treat.

Example two: the House leadership last Tuesday brought a bill to the floor that would ban abortions after 20 weeks of pregnancy. The bill has zero chance of passing the Senate. It has less chance of being signed by the President. Instead, Republicans should place themselves on the side of giving more information to women, empowering them by making it law that they view a sonogram of their baby before they have an abortion. That could possibly lead to fewer abortions, the goal of pro-lifers, and likely make ineffective legislative measures unnecessary.

With abortion and so many other issues, Republicans are locked in an ideological prison. It isn't about compromising pro-life and other principles. It is about looking to the future and re-crafting the argument for a new generation that doesn't speak the language of the past or accept many of its values.

"The opportunity for Republicans to play the lead role in developing a breakout system is historic," says Gingrich, "and will both reward the party with victory and reward the country with vast new opportunities for jobs, economic growth, long-term prosperity, greater learning, better health and greater security."

What's not to like about that? As the late Washington Redskins head coach George Allen said: "The future is now."