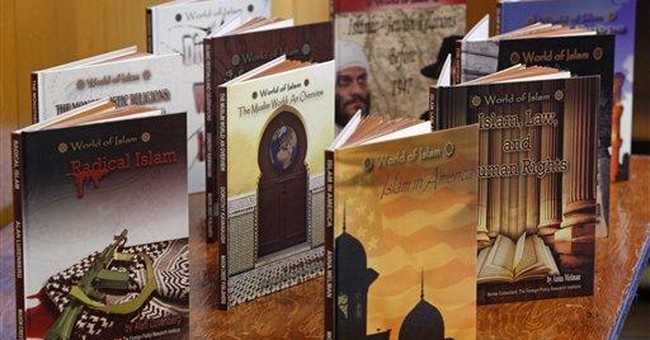 Public interest in wars and "man-caused disasters" (formerly known as the war on terror) isn't what it used to be, except when men try to cause disasters, as in the recent attempted bombing of Times Square.

But one war that always attracts public attention is the war over textbook content. Shaping how the next generation thinks is as much about politics and the way one views the world as it is about education.

The Texas State Board of Education last week adopted new social study and history curricula. After weeks of comments from the public and heated rhetoric between Republicans and Democrats on the Republican-controlled board, board members voted along party lines on what to teach 4.8 million Texas public school students about history, social studies and math over the next 10 years. The vote is important because Texas is the second-largest textbook buyer in the country and influences textbook content for much of the rest of the nation. The only unanimous vote by the board came over math textbooks. You can't get a political argument going over the sum of one plus one.

This war has been going on since 1961 when a Texas couple, Norma and Mel Gabler, launched their textbook crusade. According to the Washington Post the Gablers, "guarded the schoolhouse door against factual errors and what they perceived as left-wing bias. Usually one and the same in their view, the transgressions they spotted were often enough to knock the offending book from the running for statewide adoption."

The firestorm they helped ignite has been burning ever since and flares up each time textbooks are to be revised.

At the heart of it all is a dispute over what kind of nation America was and is. Some conservatives claim it was -- and is -- a "Christian nation." But what does that mean? What would a Christian nation look like? Would individuals love their enemies, instead of denouncing them? Would people live within their means? Would individuals, rather than government, be doing more to feed the hungry, visit prisoners and care for widows and orphans? Would there be fewer abortions, less sex outside of marriage, not as many divorces and less cohabitation? Would more of us hunger after truth instead of watered-down syncretism? Would there be harmony among the races in a Christian nation?

None of these describe modern America and so defenders of the "Christian nation" belief cling to references by the Founders to "Divine Providence" and similar euphemisms for the Almighty and want them in textbooks. To prove what?

The left started this war by attacking what was for years taken for granted about America, most especially that we are an exceptional country. The proof is the number of people who want to come here and the selflessness displayed by our citizens in the treasure we've spent and the blood we've spilled on behalf of others.

Too many on the left seem embarrassed by America's prosperity and standing in the world. The right seems just as committed to tearing the country down, literally and figuratively.

When liberals rewrite textbooks, inserting their own spin on history, they are said to be engaging in academic freedom. When conservatives attempt to do the same, they are called censors, bigots, anti-scientific and worse.

Surely conservatives can acknowledge that slavery and the civil rights movement are important subjects to study. And just as surely, liberals ought to acknowledge the contributions made to America by people who were motivated by their faith in God; that Ronald Reagan was a force in bringing down Soviet communism; and that the sovereign state of Israel is a democracy and beacon of freedom in a tough neighborhood. These were among the subjects over which Texas State Board of Education members and the public argued.

California, the largest purchaser of textbooks in the country, is in financial trouble and so has put off purchasing new textbooks until 2014, meaning that as Texas goes, so goes most of the nation.

It's too bad that people of different political stripes can't agree on a common approach to history and the ever-changing social scene. And because they can't, the textbook wars are likely to continue.