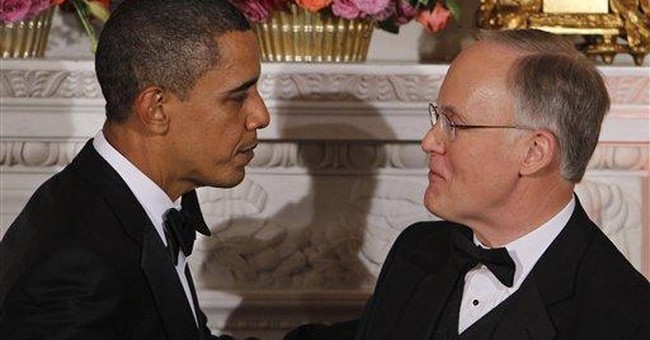 When Republicans regain a majority in the House and Senate -- either this fall, as seems increasingly likely, or in the election following -- they must learn from their previous mistakes when they last held power. In addition to focusing on overturning whatever health insurance "reform" proposal this Congress eventually passes (by a veto override, or a lawsuit challenging the measure's constitutionality), a Republican congressional majority must help large numbers of the public unlearn the factual errors they have been taught to accept.

From "climate change," to the notion that government is a guarantor through "entitlement" programs of a minimal outcome in life, to the forgotten idea given to us by the Founders that Liberty is the most precious gift there is, the country needs a history lesson based on truth, experience and provable facts.

One of the things I admire about Glenn Beck's program on Fox is his chalkboard. Agree with him, or not, Beck's appeal is largely due to his teaching role. Everyone has had the experience of sitting in a classroom while a teacher writes things on the board, things considered important enough to learn. So much of what passes for facts today are like what another generation called "old wives' tales." They were assumed by many to be true, though few sought information that would have disproved them. Worse, few asked questions that would have unraveled the falsehoods.

Republicans need to do at least two other things. They should present at hearings and through TV and radio commercials individuals who will confront the political equivalent of old wives' tales. Huge numbers of us believe government is essential to a better life. Instinctively and from stories handed down from grandparents who endured wars and economic downturns, we know that the strength of America is not in its government, but in its people. That's why the Preamble to the Constitution begins, "We the people." Power comes from the bottom up, not the top down as in totalitarian societies. The formerly poor should be encouraged to tell their stories about overcoming. America loves stories. More of ours should be told to inspire others.

During TV coverage of the Winter Olympics in Vancouver, viewers were treated to a replay of the 1980 American hockey team victory over the Soviet Union. Anyone who saw it realized this was more than a sports triumph. It was the last year of Jimmy Carter's presidency and the nation was in a funk. In a retrospective interview with ABC sportscaster Al Michaels, teammates told the story of how coach Herb Brooks inspired them to reach beyond their talents to their dreams. They did and the scene of that "do you believe in miracles?" moment continues to resonate 30 years later. That hockey team and its dreams are the story of America, a country that has always let its reach exceed its grasp and been the better for it.

Where is the political equivalent of Herb Brooks? Who will inspire a nation to again believe in itself and the power of the individual? A Republican majority should turn the nation's attention away from Washington. A Republican majority must teach us again that "you can do it," like so many of our fathers did when the training wheels came off and we learned we could fly down the sidewalk without assistance.

America doesn't need restructuring. It needs revival; revival of the principles that made us strong and great; revival of the moral foundation that proved to be our real strength and allowed us to conquer our demons and become independent, not dependent on government.

This is the message most Americans want to hear and need to hear. Will the Republicans deliver it? Is there a leader who can articulate our hopes and in the process withstand the Left's onslaught that such people are "uncaring"? In fact, liberty is the highest form of caring. It is why we marvel at a bald eagle in flight. It is why we once yearned to breathe free and might yet again.