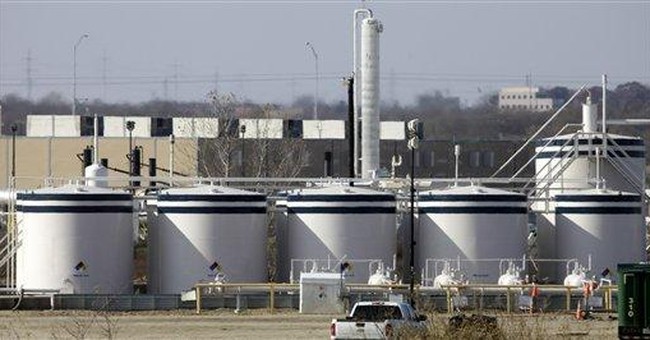 PORSTEWART, NORTHERN IRELAND -- A familiar philosophical question goes like this: If a tree falls in the forest and no one is around to hear it, does it make a sound?

Here's another: If a doctrine falls, will enough believers admit they were wrong and withdraw support for policies associated with it?

The "doctrine" of global warming, now euphemistically called "climate change," suffered a severe blow last week as much of Europe was buried in record amounts of snow and sub-freezing temperatures. "Experts" who believe in global warming, uh climate change, went on television where they bravely tried to make a distinction between weather, which they said was about what happens today, and climate, which is long term. Most of it fell on deaf -- and cold -- ears as growing numbers disbelieve the "experts," relying more on their own "lying eyes."

Writing Sunday in London's Daily Mail, columnist David Rose analyzed recent scientific data amassed by eminent climate scientists. Rose says that far from a warming planet, "The bitter weather afflicting much of the Northern Hemisphere is only the start of a global trend towards cooler weather that is likely to last for 20 or 30 years." Rose cites data from the U.S. National Snow and Ice Data Center in Colorado, which found that, "Arctic summer sea ice has increased by 409,000 square miles, or 26 percent, since 2007." This, he says, challenges "some of the global warming orthodoxy's most deeply cherished beliefs, such as their claim that the North Pole will be free of ice by the summer of 2013."

During last month's climate summit in Copenhagen, more than 150 scientists with backgrounds in climate science wrote an open letter to UN Secretary-General Ban Ki-moon, a global warming believer. The letter begins, "Climate change science is in a period of 'negative discovery' -- the more we learn about this exceptionally complex and rapidly evolving field the more we realize how little we know. Truly the science is not settled."

The scientists challenge 10 of the main claims of the global warming-climate change true believers and write, "...there is no sound reason to impose expensive and restrictive public policy decisions on the peoples of the Earth without first providing convincing evidence that human activities are causing dangerous climate change beyond that resulting from natural causes. Before any precipitate action is taken, we must have solid observational data that recent changes in climate differ substantially from changes observed in the past and are well in excess of normal variations caused by solar cycles, ocean currents, changes in the Earth's orbital parameters and other natural phenomena."

That seems more than reasonable, but politicians in Europe and America want to rush through additional restrictions on how we live in order to seize more power. This is the major reason for their panic attack. As new scientific evidence adds to the body of information, history and common sense, the power grab by the politicians is in peril. The hurry-up offense, to employ a football term, is being used to rush through legislation before the defense can devise an effective response. But the defense is now on the offense, and the offense is being forced to poorly play defense.

Should we do nothing about our consumption of petroleum? No, we should use this window of opportunity to decrease our reliance on petroleum; not because of "climate change," but to deprive the oil-producing nations of money too many of them use to underwrite terrorism. This should satisfy both the global warming disciples and deniers and make America and Europe less dependent on nations that wish to destroy our liberty. But threats to liberty are not limited to some oil-producing nations; they can also be found in the British Parliament and in the American Congress.

The falling doctrines now make so much noise that only those without hearing fail to notice.