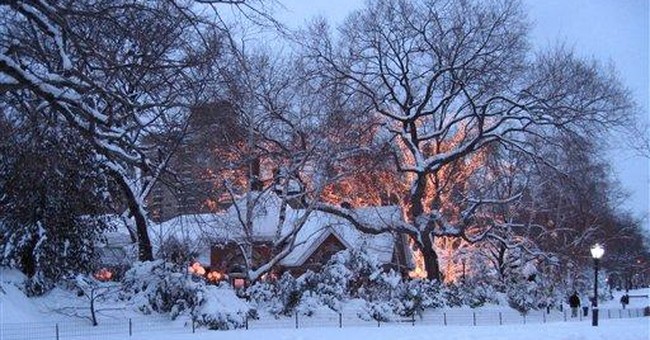 No one I know makes New Year's resolutions anymore. In part this may be because the resolutions often deal with our weaknesses -- lose weight, quit smoking -- so that when we fail, we resolve to stop resolving rather than be reminded of our inability to keep them.

Would that Congress might resolve to tell the truth. Most members probably know what truth is, but they cannot speak it for fear of offending groups that traffic in lies and fund their re-election campaigns. Lies usually raise more money than the truth. It is easier to believe a lie than to embrace virtue as more than its own reward.

Which brings me to the Senate's Christmas Eve passage of health care "reform." More than visions of sugar plums must have been dancing in the heads of senators as they voted for a monstrosity cooked up behind closed doors and minimally served up before the vote.

First, though, we must understand in a relativistic age what truth is. If objective truth does not exist, then there is no point debating public and foreign policy issues.

Dictionary.com defines "truth" as: "conformity with fact or reality."

What is a fact? What is reality? In Washington, perhaps more than any other place in America, truth and reality are what the reigning political majority say they are. Here, truth and reality have become casualties of majority rule. Example: the way health care is delivered in America needs reform. That's a reality. The means to that end -- as reflected in the recently passed Senate and House bills -- is fiction.

The office of Minority Leader Mitch McConnell cobbled together a list of what it called the top 20 memorable quotes from the 25-day health care debate. And there are some whoppers.

In April, Sen. Arlen Specter, D-Pa., said, "I will not be an automatic 60th vote." Yet on Dec. 15, Specter said, "I came to the caucus to be your 60th vote." People can get whiplash when their heads are quickly turned, except in Congress, where it happens with regularity.

Sen. Roland Burris, D-Ill., promised, "If (the bill) does not have a public option, I will not vote for it." It doesn't and he did.

In a statement that ought to erode any remaining public confidence in the way many of our elected representatives do their work, Sen. Max Baucus, D-Mont., said, "I'll just read. This is from Wikipedia. It may not be accurate." Who cares about accuracy -- or truth -- when there is a bill to be passed? Baucus also said he couldn't do "the correct math" and "... whether you use a 10-year number or when you start in 2010 or start in 2014, wherever you start at, so it is still either $1 trillion or it's $2.5 trillion, depending on where you start."

A trillion here, a trillion there. It isn't his money, so why should he care?

My two favorites are from Sens. Mary Landrieu, D-La., and Ben Nelson, D-Neb. Landrieu said, "I know people don't believe this, but I can't be bought." This was after she voted for cloture in exchange for a $300 million earmark for her state. In a similar spirit, Nelson said, "My vote is not for sale, period." This after it appeared he sold his vote in exchange for a Medicaid payment exemption for Nebraska.

Two character qualities accompanying the definition of "truth" are honesty and integrity. Congress is in very short supply of these as reflected in the latest NBC News/Wall Street Journal Poll. Sixty-eight percent disapprove of the job Congress is doing and only 22 percent approve. I suspect the gap will widen in the next poll when opinion about the health care debate is measured.

If only they would resolve to tell the truth.