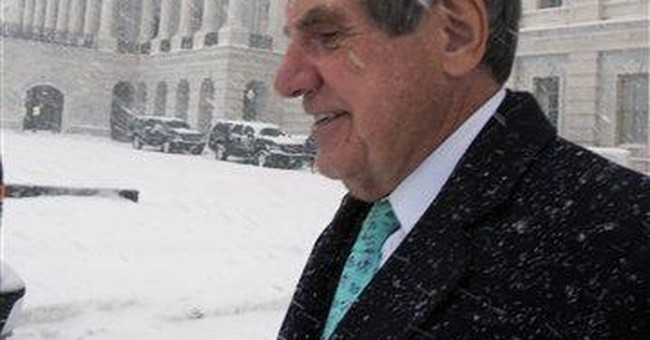 There were two snow jobs in Washington over the weekend. One came from the sky as a record December snowfall blanketed the city. The other came from Capitol Hill where the Senate labored to cover up the real effects of its massive "health care reform" bill.

All you need to know about this monstrosity is contained in a paragraph from page four of the Congressional Budget Office's 21-page letter to Senator Majority Leader Harry Reid: "According to CBO and (the Joint Committee on Taxation's) assessment, enacting the Patient Protection and Affordable Care Act with the manager's amendment would result in a net reduction in federal budget deficits of $132 billion over the 2010-2019 period. In the subsequent decade, the collective effect of its provisions would probably be continued reductions in federal budget deficits if all of the provisions continued to be fully implemented. Those estimates are subject to substantial uncertainty."

So uncertain are they that the CBO later noticed an error in its calculations and a day later on Sunday, Dec. 20 delivered another letter to Senate leaders that said: "Correcting that error has no impact on the estimated effects of the legislation during the 2010-2019 period. However, the correction reduces the degree to which the legislation would lower federal deficits in the decade after 2019."

The public is being asked to swallow a bill that most senators haven't read, contains cost projections that are substantially uncertain, and touts outcomes that can be reasonably predicted to be nothing that resembles what Democrats are promising.

Senator Ben Nelson, Nebraska Democrat and a supposedly staunch pro-lifer, agreed to vote for the bill after, as The Washington Post put it, he got "abortion language" he wanted and "also secured other favors for his home state." That's what it's ultimately about: getting favors for your home state so you can be re-elected. Re-election trumps the Constitution and the will of the people, most of whom oppose the Senate and House health care "reform" bills.

Even one's stand on a moral issue like abortion can be compromised for the right deal. Inserting language that supposedly restricts federal funding of abortion in order to provide political cover to Sen. Nelson turns out to be a sham. According to House Minority Leader John Boehner, whose office wrote a critique of Reid's 383-page Manager's Amendment, "Everyone enrolled in these (health) plans must pay a monthly abortion premium and these funds will be used to pay for the elective abortion services. The Reid amendment directs insurance companies to assess the cost of elective abortion coverage and charge a minimum of $1 per enrollee every month."

Some defenders of this deal argue that federal money will be magically segregated when it comes to abortion and that money going to abortion providers will be for other "services." Even if this were true -- and there is little truth coming out of Washington these days -- that is like saying the government won't pay for the actual procedure, but it will subsidize other costs, such as the electric bill and the rent on the clinic's office space.

Republicans have done a good job highlighting the multiple flaws in the Senate bill (and the similarly long House bill). Most importantly for seniors, the Senate bill slashes hundreds of billions of dollars from Medicare to pay for a new government program. It includes massive tax increases on individuals and businesses, which means businesses are unlikely to hire workers at a time of double-digit unemployment. It includes a massive new entitlement program -- the CLASS Act (short for Community Living Assistance and Support Services) -- which Budget Committee Chairman Kent Conrad has described as "a Ponzi scheme of the first order" and which was recently opposed by a bipartisan majority, including 11 Democrats.

To their credit, Republicans have stood together in opposition to this health care fiasco. Their pledge to voters in the November 2010, election should be to repeal the measure and to offer real insurance and health care reform that will not include an abortion provision, new taxes, more entitlements and a bigger bureaucracy.

Yes, it can be done.