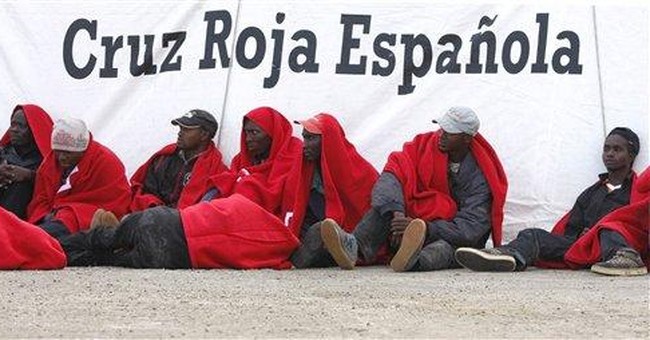 PORTSTEWART, NORTHERN IRELAND -- The Daily Telegraph's headline is meant to shock, or at least get the attention of Europeans apathetic about the threat they face: "A Fifth of European Union Will Be Muslim by 2050."

In a related article "Muslim Europe: the Demographic Time Bomb Transforming Our Continent," The Telegraph's lead sentence summarizes the problem: "Britain and the rest of the European Union are ignoring a demographic time bomb: a recent rush into the EU by migrants, including millions of Muslims, will change the continent beyond recognition over the next two decades, and almost no policymakers are talking about it."

The late British parliamentarian Enoch Powell warned more than 40 years ago that Britain had to be mad to allow in 50,000 dependents of immigrants every year. Powell, who was denounced as a racist and a xenophobe by the intellectual elites, compared it to watching a nation busily engaged in heaping up its own funeral pyre.

In retrospect, Powell looks like a prophet. According to Oxford demographer David Coleman, Britain's non-white population is on course "to grow from 9 percent at the last census in 2001 to 29 percent by the year 2051." Coleman estimates that if Britain continues at its current level of immigration -- 191,000 per year by 1999 reports -- its population could increase by 15 million by 2050, which will bring change most Britons don't believe in.

In his new book, "Reflections on the Revolution in Europe: Immigration, Islam and the West," Financial Times and Weekly Standard columnist Christopher Caldwell lays out in undisputable terms and with irrefutable facts the threat faced by the West. He says it is worse than anything al-Qaida can deliver. Caldwell cites numerous reasons for the predicament faced by Europe (and the United States), including the idea of a European Union, which is quickly eliminating individual identity, culture and money (the one size fits all Euro). Without an identifiable culture, immigrants cannot be assimilated, even if they want to be, which in the case of radical Muslims, argues Caldwell, they don't.

In addition to massive immigration, Caldwell says, the high birth rate among immigrants, coupled with the low birth rate among white Europeans (barely enough in some countries to replace those who are dying) means that soon 20 percent of Europe's population would be Muslim.

The rapid population change, writes Caldwell, is startling when you consider that as recently as the mid-20th century there were virtually no Muslims in Western Europe. At the turn of this century, there were between 15 million and 17 million Muslims in Western Europe, including 5 million in France, 4 million in Germany and 2 million in Britain. What is the attraction of these countries, which to some Islamic minds are full of idolatry, hedonism and secularism? All one need do is listen to the radical sermons and the vitriolic statements of certain Islamic leaders and spokesmen and to the radical Islamic media. They say their goal is to subjugate Europe and America to their religion.

At a recent conference near Chicago called "The Fall of Capitalism and the Rise of Islam," Imam Jaleel Abdul Razek responded to a question from the audience about whether the U.S. Constitution or Sharia law should rule the United States when Islam is in control. Razek said Sharia would rule and that the Constitution would have to go.

Caldwell writes that uncontrolled immigration without assimilation "exacts a steep price in freedom. The multiculturalism that has been Europe's main way of managing mass immigration requires the sacrifice of liberties that natives once thought of as rights."

Those who support immigration without assimilation claim the West needs more brainy people to run their computers and discover cures for diseases. Why can't our school systems produce more intelligent people without having to import them? More than "brains" are coming to the West. Those with a radical theological and political agenda are infiltrating us more effectively than our enemies of the 20th century ever dreamed of doing.

Twice in the last century America has delivered Europe from homegrown evil. It won't be able to do so again when that evil is imported and when America is dealing with immigration problems of its own.