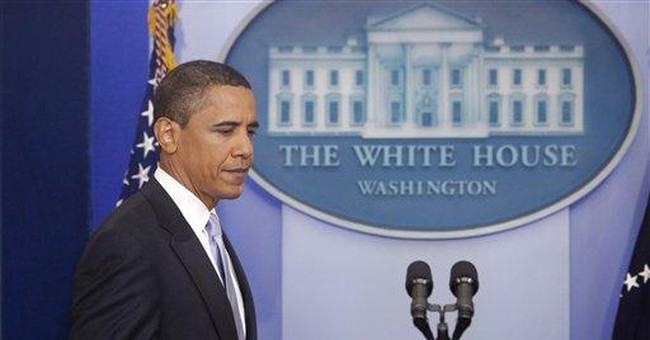 There was a noticeable change in the climate during President Obama's Tuesday news conference that had nothing to do with the heat and humidity, the excuse given for moving the event indoors from the Rose Garden. Those Chicago boys (and girls) know all about cold winters, but if they think 80 degrees and partly cloudy is hot, wait until August when the three H's -- hot (95 degrees), humid (95 percent) and hazy -- take over.

For the first time in a long time, the president was challenged about his positions on Iran, health care and his "occasional" smoking. This may be due to the heavy criticism the media have been getting from commentators who have accused them of not doing their jobs with coverage that has bordered on the worshipful.

In his strongest statement yet on the demonstrations in Iran and the violence by the government to suppress them, the president said he was "appalled" and "outraged" and that the response has been "unjust." He followed this with the usual genuflections about "respecting" the "sovereignty" of Iran, as well as their religion. How can anyone respect a government as sovereign that rigs an election to stay in power and a religion that countenances the murder of unarmed citizens? Is Allah against free speech?

The president said his comments on the election and the demonstrations have been "consistent" when clearly they have not. But better to get to the right place on a long trip than refuse to begin the journey.

The president wouldn't answer a question about a "red line" for Iranian behavior, which, if crossed, would trigger a significant response from the United States. Neither would he abandon "hot dog diplomacy." Despite all that has happened, Iranian diplomats are welcome at American embassies and consulates around the world for July 4 celebrations. The irony of Iranians participating in a recognition of American independence and the freedoms that accompanied it probably won't impress these servants of a theocratic state, but maybe someone can pry open their tightly closed minds.

The president made one important point with which I agree. He noted that congressional (mostly Republican) critics have their responsibilities and duties and so does he. He said the Iranian government has been "mistranslating" his remarks and claiming the inaccuracies prove the United States and the West are behind the protests and egging on the protestors. He doesn't want to say anything that can be taken down and used against America on Al-Jazeera.

There is another point, which the president made last week. Since all four of the presidential candidates (and they were culled from an initial group of more than 400) were hand-picked by the mullahs who actually call the shots in Iran (and who want to call nuclear shots, as well), who can say for sure that if any of the other three were to win a recount he would be an improvement over the current president, Mahmoud Ahmadinejad?

Here's another question: what kind of freedom do these demonstrators want? This may not be Hungary in 1956, or the Prague Spring of 1968; it also may not be Poland or East Berlin in the '90s. How do we know that should anyone else be declared the winner, he will announce an end to Iran's nuclear weapons program, cancel "Allah's will" announced by Ahmadinejad to obliterate Israel and stop financing terrorism? Supposedly fair elections have elevated terrorist organizations to power and terrorist groups are challenging supposedly "moderate" leaders in Israel and Gaza, as well as in Arab and Muslim countries. Adolf Hitler won one election.

Since the United States apparently does not intend to support the demonstrators with military or other tangible means, President Obama is right to be cautious. This revolution, like the previous one in 1979 that brought the religious fanatics to power, must ultimately be won or lost by the Iranians themselves.