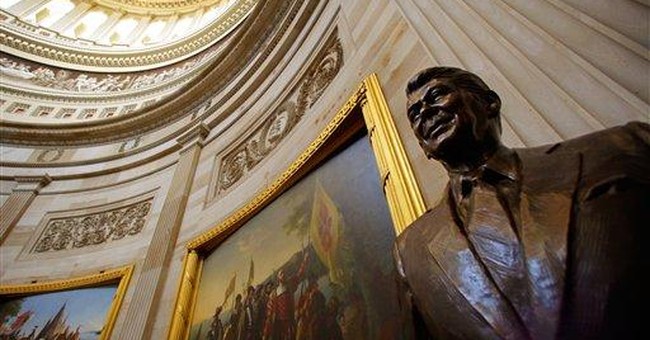 A statue of Ronald Reagan was unveiled last week in the U.S. Capitol Rotunda at a time when many Republicans, and even some conservatives, think Reagan's ideas are passe. Before moving on, Republicans, and those conservatives who don't want to "live in the past," should be asked what better ideas they have to offer.

As the Obama administration and congressional Democrats move quickly with their new power to grab even more power and to build larger, more intrusive and costlier government, they -- and we -- should consider Reagan's thoughts on the "Power of the individual, rather than government power and peace through strength to keep us free." And, "Man is not free unless government is limited." And, "concentrated power has always been the enemy of liberty."

As government acquires the auto industry and seeks to own health care; as it plans to take more money from the productive in order to subsidize the unproductive or less productive; as government evolves from nanny to a cruel and abusive guardian that will rob the individual of incentive and punish those who manage to succeed with crippling regulations and higher taxes, where are the champions of liberty and personal responsibility?

Instead of stories many of us heard as children about people who grew up in difficult circumstances -- alcoholic mother, abusive father, racial discrimination, physical handicaps -- and rose to self-sufficiency, even prosperity, we get messages that say you can't do it on your own and you will never amount to anything unless you place your faith in government.

"You can do it," parents tell their children as they urge them to higher levels of achievement. This sentiment used to be found in popular culture, including feel-good films that inspired people to achieve their ideals. Now we punish the successful and make the pursuit of success more difficult because of strangulating government.

Why must government "fix" health care? Since government does few things well, why aren't better minds than politicians leading the way? We know what works. It isn't collectivism and government bureaucrats telling us what type of health care they will allow us to have, it is individuals employing innovation that will bring transformation. Individuals like the late statistician W. Edwards Deming who developed his System of Profound Knowledge and his 14 Points for Management guidelines, using principles known as "systems thinking," and used them as a consultant to Japanese industry to help several Japanese manufacturers create more efficient workplaces, higher profits and increased productivity. (Visit http://www.managementwisdom.com/goodnews.html for an excerpt from a television documentary that spells out how health care can be fixed, starting with hospitals, not government.) Why aren't more people raising the profile of these proven solutions, which have cut costs and improve d patient care at hospitals that have implemented them?

Some years ago, CBS News correspondent Lesley Stahl reported on a jobs program run out of a Harlem housing project in New York City. These were the hardcore unemployed who either had never had a job, or couldn't hold onto one. All were minorities. The leader asked, "How many think racism is a problem in America?" Every hand went up. He then said, "So what? Your problem isn't racism; your problem is attitude and that's what we're going to change."

He taught them how to dress, how to shake hands and look prospective employers in the eye. Cameras followed one woman to an interview. She got the job and began to cry. She had discovered her value and the power of the individual. Government didn't give her that job; she got it on her own. In fact, government had been sending her checks, which caused her to be more dependent on government.

"There are no constraints on the human mind, no walls around the human spirit, no barriers to our progress except those we ourselves erect," said Ronald Reagan. And, "Government's first duty is to protect the people, not ruin their lives."

As politicians prepare to do things for which government has little experience and even less ability, where are the leaders who will again embrace the power behind Ronald Reagan's thoughts? It was Reagan who said, "Governments tend not to solve problems, only to rearrange them." He warned, "Freedom is never more than one generation away from extinction. We didn't pass it to our children in the bloodstream. It must be fought for, protected, and handed on for them to do the same."

Government is eroding freedom. It is time to fight, but where are the generals to lead us? Will the public wake up and realize what is being stolen from us before it is gone?