See the USA in Your Government Car 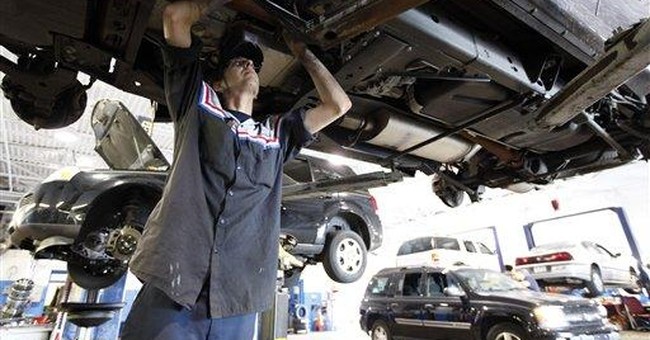 "See the USA in your Chevrolet

America is asking you to call.

Drive your Chevrolet through the USA

America's the greatest land of all."

Fifty years ago, those words set to music each week on the old NBC "The Dinah Shore Show" reflected an America and an automobile industry that is no more. That time and that industry were laid to rest this week when General Motors filed for bankruptcy and the government effectively nationalized GM and Chrysler after wasting billions of our tax dollars on a failed bailout.

Despite disclaimers from President Obama that the government doesn't want to be in the car business, it is hard to see what it has bought with our tax dollars other than two of what used to be known as "the big three." Government by default or determination will choose the types of cars the companies it owns will make. Government will buy a lot of them because not enough customers will unless they are made offers they can't refuse, not by a car salesman in a loud sport coat, but by a government bureaucrat in a suit.

It's difficult to let go of an American dream. When I was growing up, every kid wanted to drive his own car. Our frugal parents (who had just one car) would let us drive it, but with restrictions, including a set time to bring the car back in the same pristine condition in which we found it.

A car was a right of passage. It conveyed independence and status. Each September we salivated at the prospect of new models. There was always a big buildup and we'd go to the Chevy (or Ford) dealer early on the morning they were for sale. Sometimes they would be covered with sheets and a dramatic unveiling would take place. TV commercials would show parts of new models in a kind of striptease before their debut. Some believe the models between 1955 and 1959, especially the 1957 Chevy Bel Air and the 1958 Impala, are unsurpassed, though Ford devotees have their Mustangs and T-Birds. Pontiac's GTO (cue the Beach Boys) and some Dodge and Plymouth models were also great.

Chrysler had the Imperial, which resembled a boat with running lights and The New Yorker for "old rich people." And then there was the one beyond our reach, but not beyond our dreams: the Cadillac. The song "Pink Cadillac" became a hit, in part because we saw Elvis in one.

America's relationship with its cars has rightly been called a love affair. Though some have tried to replicate the smell of a new car in spray cans, there is nothing quite like the feeling of sinking into new faux leather and later, if you could afford it, the real thing.

Much, if not all of those thrills will be gone, thanks to greed by the unions, government overregulation and bad management. The customers, who once were always right, have been cheated.

All one has to do is look at government-made cars to see they are about as attractive as government art, government architecture, or many other things government does poorly. The Skoda (when the Czechoslovakia communist party made them -- they're nice now thanks to free market capitalism) had its own jokes: "How much is a Skoda worth with a full tank of gas?" Answer: "Twice as much." East Germany's Trabant, a major polluter, was little more than a two-cycle engine encased in the thinnest veneer and the old Soviet Union cars were about as appealing as a Siberian winter. These are the kinds of cars governments have produced.

President Obama says all of those laid-off autoworkers will have to "sacrifice" for the sake of their children and grandchildren. So much for their American Dream. If a Republican president had said that, he would have been denounced as insensitive and uncaring.

"On a highway, or a road along the levee

Nothing can beat her

Life is completer in a Chevy."

"Bye-bye Miss American Pie; drove my Chevy to the levee but the levee was dry."

This is the day GM died.