Biography and the Law 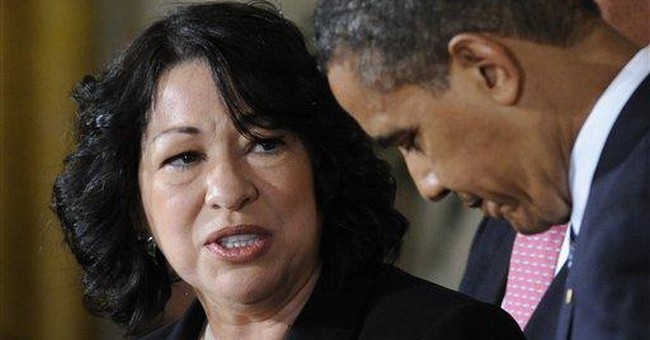 In introducing his choice to replace Justice David Souter on the U.S. Supreme Court, President Obama touted Judge Sonia Sotomayor's biography. He noted her humble beginnings: she grew up in a housing project in the Bronx; a child of Puerto Rican parents; a father who died when she was nine; a mother who worked six days a week as a nurse so she and her brother could go to Catholic school.

If these humble beginnings mattered, as they relate to Sotomayor's view of the Constitution, Clarence Thomas should have sailed through his confirmation hearings instead of being subjected to "a high-tech lynching," as he famously put it. Clarence Thomas also came from humble beginnings (as did George W. Bush's Hispanic Attorney General Alberto Gonzales), but biography matters only if you're a liberal. If you evolve into a conservative, it is irrelevant, at least to the elites.

President Obama says a main criterion for selecting someone for the court is that the person be empathetic to people and to the consequences of legal decisions.

In a 2002 speech at Berkeley, Calif., Judge Sotomayor said she believed it is appropriate for judges to consider their "experiences as women and people of color" when they make decisions, adding that such things should "affect our decisions."

That statue above the Supreme Court -- the one of a woman wearing a blindfold and balancing scales in her hand -- is meant to depict the law as blind to one's gender, race and personal circumstances. Obama wants that blindfold removed and the law tailored, like a suit, to fit the individual. This is the classic liberal view of the law, or as Judge Sotomayor has put it, "(the courts) are where policy is made."

None of this matters, because Democrats have the votes in the Senate to confirm her. Moderate and even some conservative Republicans will cower at the prospect of being labeled racist, sexist and anti-Hispanic. Plus, it is a one-for-one exchange, swapping the liberal Souter for the liberal Sotomayor, so not all Republicans will want to put up a fight. They should, if for no other reason than to train for the next nomination, not to mention standing on principle.

There are not many personal indiscretions that could torpedo this nomination. While tax avoidance sank Tom Daschle's nomination to be Health and Human Services secretary, tax problems didn't stop his successor, Kathleen Sebelius, or Treasury Secretary Timothy Geithner. And we seem to have gone beyond the avoidance of nanny taxes that derailed previous nominations for lesser positions. So what should the Republican strategy be?

The strategy should be played out on at least three fronts. The first front should be her rulings, several of which have been reversed by the Supreme Court. These rulings are fair game.

Republicans should expose Judge Sotomayor's liberalism, as revealed in cases like Ricci v. DeStefano in which white male New Haven firefighters, denied promotion after an exam because no African Americans qualified for advancement after taking the test, filed a discrimination suit when the city of New Haven threw out the exam results altogether and decided not to issue any promotions. The firefighters' suit was eventually dismissed. Sotomayor, as part of a three-judge panel hearing the case, upheld that dismissal. Even liberal Washington Post columnist Richard Cohen and Sotomayor's colleague, Judge Jose Cabranes, a Clinton appointee, expressed shock and disappointment over her ruling.

The second front should be a recitation of what the Founders had in mind when they wrote the Constitution and the benefits that come from conforming people to that document. Too many of our schools teach too little history, or falsify it. A history lesson would be good for the country. If the Constitution is treated like liberals treat the Bible, it loses its meaning, purpose and power.

The third front should focus on the hypocrisy of the left, including President Obama. There is a gold mine of quotes from liberals, like former DNC Chair Howard Dean, excoriating conservative judicial nominees. Republicans should use the quotes against those who opposed conservative candidates for the Supreme Court. During his brief time in the Senate, Obama voted against John Roberts and Samuel Alito. He acknowledged they were well qualified for the bench, but he opposed their nominations because he thought they might be conservatives.

If Senator Obama could vote that way, why shouldn't Republicans do unto him what he did unto a Republican president and vote against Sotomayor for her liberalism? At a minimum, her statements and record should receive a thorough going over.