How About A Stimulus For Life? 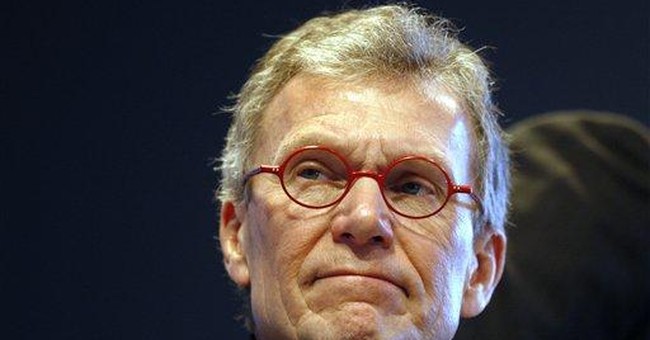 Thanks to former Lieutenant Governor of New York Betsy McCaughey and her recent essay on Bloomberg.com entitled "Ruin Your Health with the Obama Stimulus Plan," we know of another problem with the just-passed stimulus bill, one that may threaten the lives of many Americans.

McCaughey discovered buried in the bill a new bureaucracy called the National Coordinator of Health Information Technology. Among other things, it means that a Washington official will "monitor treatments to make sure your doctor is doing what the federal government deems appropriate and cost effective." Some of that occurs now, but this would take it to a whole new level.

The idea comes straight from former HHS nominee Tom Daschle's 2008 book "Critical: What We Can Do About the Health-Care Crisis" in which he says that doctors are going to have to give up their autonomy and "learn to operate less like solo practitioners." Inevitably, this means the government will decide who gets life-saving treatment and who doesn't. It is survival of the fittest in practice. Thank you, and belated happy birthday, Charles Darwin.

In 1979, six years after Roe v. Wade, philosopher and theologian Dr. Francis Schaeffer and the about-to-be surgeon general of the United States, Dr. C. Everett Koop, wrote a book, "Whatever Happened to the Human Race?" In chapter three, "Death by Someone's Choice," the authors write, "Will a society which has assumed the right to kill infants in the womb -- because they are unwanted, imperfect, or merely inconvenient -- have difficulty in assuming the right to kill other human beings, especially older adults who are judged unwanted, deemed imperfect physically or mentally, or considered a possible social nuisance?"

No one should be surprised at the coming embrace of euthanasia. After the Supreme Court deprived the unborn of their right to live by declaring them nonpersons, it was only a matter of time before other categories of human life deemed to be inconvenient or unwanted would also face extermination in order to benefit the government, the healthy and the wealthy, who prefer not to be disturbed in their pursuit of pleasure, personal peace and affluence.

Schaeffer and Koop predicted "the next candidates for arbitrary reclassification as nonpersons are the elderly." That 30-year-old prophecy, deemed hyperbole and alarmist by many at the time, now seems to be coming true. In 1993, Hillary Clinton, as chair of the Task Force on National Health Care Reform, pushed the bureaucratic-heavy Clinton Health Care Plan, quickly labeled "HillaryCare," which was long on government oversight, short on patient choice. A Democratic Congress defeated it a year later. Now we have the National Coordinator of Health Information Technology and a Democratic Congress and President Barack Obama appear ready to resume their assault on all but the fit and those who do not burden government with their need for treatment. "Medicare now pays for treatments deemed safe and effective," writes McCaughey. "The stimulus bill would change that and apply a cost-effectiveness standard set by the Federal Council."

I called Koop, who is now 92. He reminded me that in 1988 he had an ailment that left him a quadriplegic. Surgery restored his limbs, but "if I'd lived in England, I would have been nine years too old to have the surgery that saved my life and gave me another 21 years." Koop fears the United States is about to embrace English socialized medicine with government authorities deciding who lives and who dies. He says the idea of government second-guessing doctors sickens him.

Great inhumanities are usually ushered in at the extremes in order to make the public more accepting. Abortion on demand followed the 1973 Roe v. Wade case where Norma McCorvey, Jane Roe, "alleged" she had been raped, resulting in pregnancy. Technology allows people to abort a "defective" baby in the womb, "selectively reduce" implanted embryos to the desired number, or even abort a female when a male is wanted.

Euthanasia will not originate with your beloved grandmother or parents. It will start in a public hospital with a 100-year-old woman who has multiple health problems and "wants" to die so as not to "burden" anyone. Public opinion polls will determine that a majority favor letting -- even helping -- the old girl die.

Yes, there are times when a patient and his family may decide to forego treatment and allow death to occur, but that decision should not be made by a government official. Once that door is opened (as it was with abortion) there will be no closing it and dying will become a patriotic duty when the patient's balance sheet shows a deficit.

They'll probably have a clergyman available to bless the government's decision and make everyone feel better about it.