'Mamma Mia' Without the Music 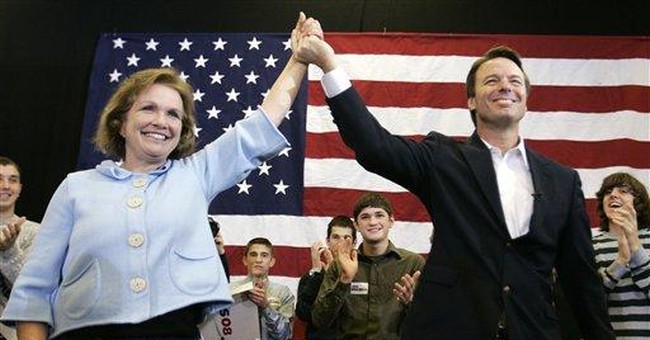 There is something familiar about the storyline: woman has more than one sex partner; woman becomes pregnant; no father's name on the birth certificate; paternity questioned.

It's the plot for "Mamma Mia," but this time without the ABBA music.

Let me stipulate, as the trial lawyer John Edwards would say, that all have sinned (as Paul, the Apostle wrote) and it is un-Christian to judge one better than another simply because he may not have committed a sin that someone else has committed. This is not about that as much as it is the aftermath. Something like: "it isn't the crime, but the cover-up that gets you."

We stopped repenting some time ago. Our preferred response after being caught in a transgression in the modern era is to explain. Our "confessional" is television and our audience is not God, but the public. After repeatedly lying about it, Edwards finally admitted to sharing another woman's bed, but he wants us to know it was while his wife was in remission for her cancer, though he told Bob Woodruff on "Nightline" that is no excuse. So then why mention it?

Edwards said he told Elizabeth about the affair in 2006. If true, that means she was campaigning for and with him, testifying to his character and concern for "women's issues" even while she was a co-conspirator in the cover-up. Isn't it a major "issue" for a married woman when her husband cheats on her? A female acquaintance told me, "It doesn't matter." I responded, "How would you feel if your husband cheated on you?" Oh," she said, "that would matter to me." So much for sisterhood. If someone else's husband has "traveling pants" it's of no concern, but if her husband's pants wander, it's a big deal.

In his carefully crafted admission, Edwards said he had not lived up to the standards he set for himself. If they were his standards he violated, few would care. But fidelity is not a standard set by Man; rather "forsaking all others" is the standard established by God, not because He wants to deprive us of pleasure, but because adultery is an affront to Him (He gets to make the rules) and causes severe damage to others.

In our narcissistic (Edwards got that self-diagnosis right), pleasure-oriented culture, politicians think they can live like Hollywood celebrities. No one expects sexual probity from an actor, which is why promiscuity no longer disqualifies one for a movie role.

As more politicians - Republicans and Democrats - are exposed for their sexual misconduct, it is less likely such low behavior will disqualify one for high office. There is speculation that because Bill Clinton has "rehabilitated" himself following the Monica Lewinsky affair, Edwards might be able to run for president again.

The big media were enablers in the Edwards mess, though the Charlotte Observer, McClatchy and Raleigh News & Observer broke the news of the Edwards affair before his ABC confessional. After the National Enquirer scooped major papers on Bill Clinton's "relationship" with Gennifer Flowers in 1992, one might have expected them to be more aware this time.

The Los Angeles Times and The New York Times knew about the Enquirer stories on Edwards, but refused to assign reporters to look into them. When California Republican Governor Arnold Schwarzenegger was said to have sexually harassed several women, the L.A. Times assigned up to half a dozen reporters to investigate.

Remember "Troopergate"? The L.A. Times had the story about Arkansas state troopers allegedly procuring women for Bill Clinton while he was governor, but didn't publish it until after the 1992 election. Funny how it isn't important, or it couldn't be corroborated when Democrats are the subject, but let a Republican stray (Larry Craig, Mark Foley and David Vitter are some recent examples) and it immediately becomes front-page news.

Edwards said the affair was "brief" and ended in 2006. If so, what was he doing last month at the Beverly Hilton Hotel at 2 a.m. with his "former" lover and her baby? Why was someone in his employ paying the woman so much money and how does she afford a multimillion-dollar home?

"I've been cheated by you since I don't know when

So I made up my mind, it must come to an end. Mamma Mia, here I go again