Misplaced Hope Can Be Dangerous 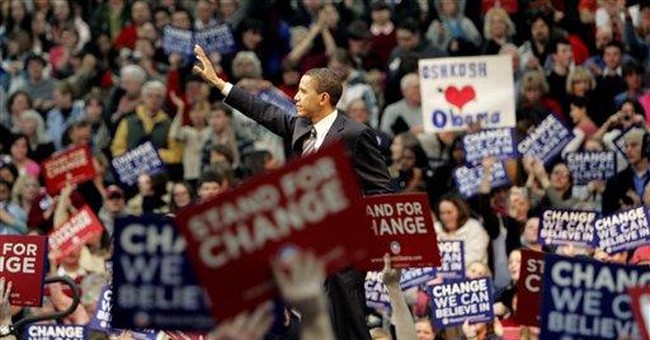 "Hope is a dangerous thing," says "Red" to "Andy" in the 1994 film "The Shawshank Redemption." Red, played by Morgan Freeman, means that Andy, played by Tim Robbins, risks despair if he hopes to get out of prison.

The sentiment is worth considering when it comes to politics. Can too much trust in a politician also be dangerous and lead to despair, even cynicism? Those old enough to recall the political scene in the '60s when first John F. Kennedy and then his brother, Robert, were assassinated, know the dangers of hope and what can happen when such hope is crushed. In the '60s, crushed hope produced rebellion, even anarchy, along with despair.

Now we're told (by members of the Kennedy family, no less) that Sen. Barack Obama is the reincarnation of the hope that was lost when Jack was murdered in 1963 and Bobby was killed in 1968. And we watch as another generation of the young, informed by their history books and black-and-white film of those days, become disciples of another young and handsome politician with a pretty wife and cute children. Will history repeat? God forbid. But will another generation be disappointed when the one in whom they are placing so much hope cannot possibly deliver?

This is where mature and experienced adults can steady the enthusiasm of the young and inexperienced. The Washington Post Magazine recently carried a cover story by Jeffrey Birnbaum titled "How Lobbyists Always Win: Dispatches from Washington's Relentless Growth Industry." It is a reminder of how, no matter who is president and which party controls government, lobbyists are part of the permanent class and very little can change without their participation and approval. Numerous "reformers" have come to Washington in the past, promising change. As often happens, they don't change Washington; Washington changes them.

One of the Kennedy campaign songs in 1960 was "High Hopes." The original lyrics of the song include the line "He had high apple pie, in the sky hopes." That could describe Barack Obama.

Hope must be grounded in objective truth otherwise it quickly becomes wishful thinking. I might hope my team wins the championship, but if they lack the talent it isn't going to happen. I might hope to win the lottery, but I don't play and if I did, I'd have better odds of being struck by lightening than taking home the jackpot.

Placing hope in politicians absolves too many of us of our responsibilities. In 1994, when Republicans were on the verge of returning to power in the House for the first time in four decades, one of the books making the rounds was "The Tragedy of American Compassion" by Marvin Olasky. The book traced the history of compassionate behavior and found that most of it came from individuals and religious institutions. The religious institutions offered hope by dedicating themselves to changing the lives of people whose bad choices had put them in need of help. Changed lives produced changed behavior and, thus, changed circumstances, leading to a more hopeful future. Olasky wrote that tragedy occurred when government began to occupy the space once dominated by religious and personal charity, displacing hope and leading to despair.

The "hope" being sold by Obama and his true believers is misplaced. Obama cannot deliver; he cannot save; he cannot improve individual circumstances by redistributing wealth and talking to America's dictatorial enemies. He is selling snake oil.

The writer of the New Testament Book of Hebrews says that, "faith is being sure of what we hope forŠ" (Hebrews 11:1). What we see in Barack Obama is a man with great rhetorical skills, who is untested in battle. Many are projecting their hopes on him because he makes them feel good. What commander would put a low-ranking officer in charge of all troops during wartime? We are close to making Obama our commander in chief with no hint of how he might perform, other than to withdraw troops from Iraq.

A President Obama might be worth the risk in peacetime, but with crafty enemies seeking to destroy us, can we afford to make what might be a fatal mistake by electing someone upon whom too many of us gave projected, ungrounded hope?