The Biden-Buttigieg Pitch: It's All Free!

Byron York
|
Posted: Dec 01, 2021 12:01 AM
Share   Tweet
The opinions expressed by columnists are their own and do not necessarily represent the views of Townhall.com. 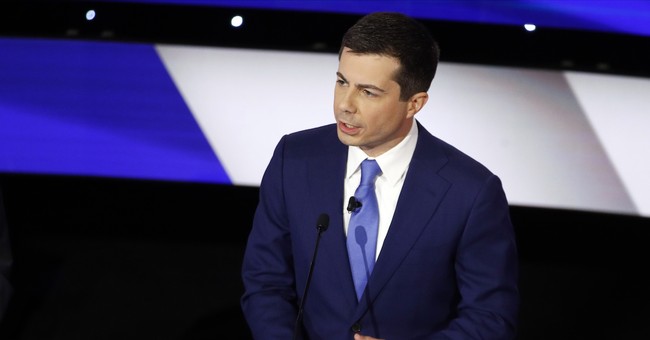 The 2020 Democratic presidential primary campaign was essentially a bidding war in which each candidate pledged to spend trillions of dollars beyond what is needed to run the country, ostensibly to rebuild the nation after the coronavirus pandemic. Candidate Joe Biden won the contest and has so far signed a $1.9 trillion "COVID relief" bill (that had little to do with COVID relief) and a $1.2 trillion infrastructure bill that goes beyond the traditional definition of "infrastructure."

So Biden came up with an argument that essentially said no one should worry because it will all be free. "My Build Back Better agenda costs zero dollars," the president tweeted on Sept. 25. White House chief of staff Ron Klain said, "The net cost of Build Back Better is zero." House Speaker Nancy Pelosi added, "The dollar amount, as the president said, is zero."

It was all preposterous, of course. Two trillion dollars does not just appear out of nowhere. When questioned, the Biden team explained that they meant the bill is "fully paid for" by higher taxes on some Americans. That is the opposite of the cost being "zero dollars." And even that argument was proven untrue when the Congressional Budget Office estimated that the Build Back Better bill is not, in fact, fully paid for, but instead would add $367 billion to the national debt.

Now, another member of the Biden team, Transportation Secretary Pete Buttigieg, is suggesting the bill could eliminate the cost of driving for Americans who buy government-subsidized electric cars.

For weeks now, Buttigieg has been touting the bill's huge subsidies for electric car purchasers. "The Build Back Better package includes tax incentives to help purchase an EV," Buttigieg tweeted on Nov. 1. "How would you use a discount of up to $12,500 toward an electric vehicle?" It's not a discount, of course, but a government subsidy -- the government giving consumers money with which to buy the car. But here's the big pitch: Those who take advantage of the government's big handout, Buttigieg said recently, would "never have to worry about gas prices again." Buttigieg said the subsidized electric cars would bestow the greatest benefits on rural Americans who drive long distances and urban residents who pay the highest gas prices. No more worries!

The problem, of course, is that cars have to run on something. Electric vehicles run on electricity, which is not free. And -- this was not part of Buttigieg's pitch -- the Biden administration is seeking to make electricity more expensive. "The administration's plans for a 'clean' electricity sector (by 2035) are really pricey," notes former Congressional Budget Office head Douglas Holtz-Eakin. "Two trillion dollars for generation, another $2 trillion for transmission and an unknown price tag for distribution, but $1 trillion for 'the cost imposed on the distribution system by electric vehicle and photovoltaic solar panel adoption alone.' That bill is roughly $50 a week for consumers, which is in the same neighborhood as the gas costs that started this political firestorm. It's the energy costs, Pete, not just gasoline."

So just like the cost of the Build Back Better agenda is not "zero dollars," the cost of operating an electric car is far more than never having "to worry about gas prices again." The administration's free-stuff pitch is fundamentally deceptive.

Americans are not stupid. They know there is a cost to everything. They add up the cost of living and make economic decisions every day. They don't need to be insulted by government officials telling them that multi-trillion-dollar wealth redistribution plans come without a cost. They know better, no matter what the president or his team say.

This content originally appeared on the Washington Examiner at washingtonexaminer.com/opinion/byron-yorks-daily-memo-the-biden-buttigieg-pitch-its-all-free.