Whatever Trump Does Next, It Has To Be About Jobs And Wages

Byron York
|
Posted: Mar 29, 2017 12:01 AM
Share   Tweet
The opinions expressed by columnists are their own and do not necessarily represent the views of Townhall.com. 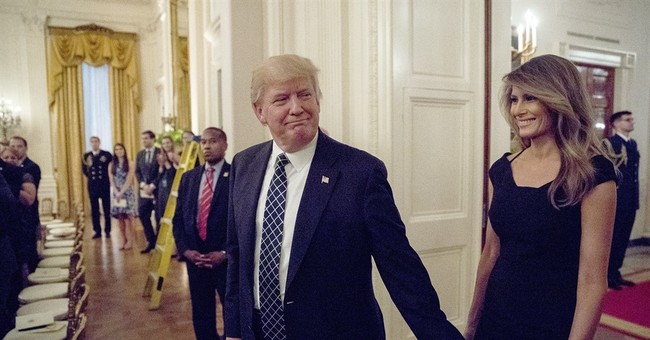 What will President Trump do after the Obamacare debacle? For 48 hours, some Hill Republicans -- and Trump himself -- spoke as if the president and the GOP could smoothly, seamlessly and swiftly pivot to tax reform. Then, Monday night, came an Axios report that Trump might choose to pursue an infrastructure bill -- the only measure with even a hope of some Democratic support -- at the same time as tax reform.

Whatever the final decision, Trump and Hill Republicans are in danger of failing again if they do not direct their every action toward the creation of jobs and an increase in wages. That's why Trump won the presidency, and it is what voters expect of him.

"Trump and Republicans have two big numbers that are the measurements of success," says a GOP pollster and strategist involved with the efforts on Capitol Hill. "One is how many jobs are created. Two is how much wages go up. He has to have both of them."

Democrats often point to the number of jobs created in the eight years after Barack Obama took office amid an economic meltdown. Unemployment, which hit 10 percent in October 2009, is now 4.7 percent. But median household income is less than it was 10 years ago. People who are working don't feel they have much chance of a raise or of finding a better-paying job. That is why it is important for Trump not only to help create jobs but also raise wages.

In its most recent poll -- the one that found Trump's job approval rating at 37 percent -- Quinnipiac asked 1,056 registered voters this question: "Do you think the nation's economy is getting better, getting worse, or staying about the same?"

"Since (the economy) is bad now, saying things are the same is pessimistic," notes the GOP pollster. In other words, when voters say the economy is the same, they often mean it's still bad.

That is why Trump won last November. Yes, other issues -- immigration, terrorism, Clinton fatigue -- played a role, but the most basic reason Trump is president is because a lot of voters believed a change was needed to improve the economy.

To give perhaps an extreme example: This week the South Bend (Indiana) Tribune reported that a local restaurant owner, an illegal immigrant from Mexico who has been in the United States for nearly 20 years and has no criminal record, might be deported. His wife, a naturalized U.S. citizen, voted for Trump and is now stunned at what has happened, having believed only "bad hombres" would be deported under the Trump administration. When the Tribune asked why she supported Trump, she answered, "I did it for the economy. We needed a change."

The new president took some early actions to address those concerns -- the Carrier deal, executive orders killing the Trans-Pacific Partnership and cutting federal regulations on business. But the first big legislative item Trump pursued was to repeal and replace Obamacare.

One problem mostly unremarked at the time was that Trump didn't even try to sell Obamacare replacement as a measure to increase jobs and wages. In his March 20 speech in Louisville, for example, Trump not only did not frame Obamacare as a jobs and wages issue, he didn't even try very hard to portray it as a cost-of-living issue, offering only a few sentences on rising premiums and not once uttering the word "deductible." Obamacare repeal and replacement, as Trump presented it, was just something that had to be done before moving on to the fun stuff, which was tax reform.

Now Trump is in fact moving on, to tax reform, or maybe to tax reform and infrastructure. Both are more obviously jobs and wages issues than Obamacare. If he wants to succeed, that's how Trump must shape and sell the legislation -- and his entire presidency.