History Lesson: President Hillary Clinton Would Be Secretive, Too 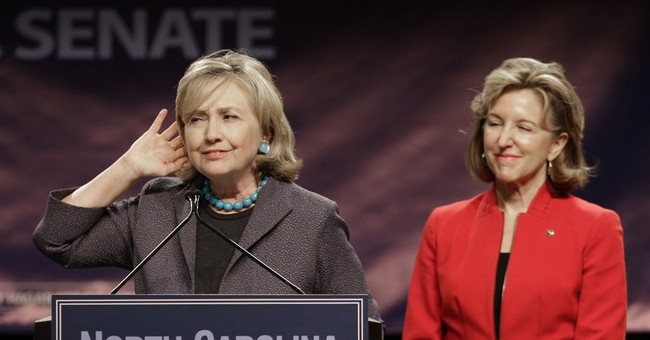 News that Hillary Clinton exclusively used a private email account to keep secret her communications as Secretary of State should surprise no one. She came to Washington more than 20 years ago determined to keep secrets, and she's still at it.

"The culture of secrecy is such that the White House refuses to provide a full list of consultants brought in to aid in the effort," the New York Times reported in February, 1993, just after the first lady got started. Clinton later went to court rather than reveal the most basic details of the effort. Story after story about her work used phrases like "wall of secrecy" and "shrouded in secrecy" and "frantic, secretive process."

When the task force collapsed in defeat, columnist Maureen Dowd wrote that "it was the first lady's secrecy and righteousness in trying to push through her 1,364-page bill that doomed the effort."

By the end of the Clintons' first year in Washington, the new White House became ensnared in the first of the scandals that would last through Bill Clinton's presidency. Hillary Clinton was deeply involved, sometimes in the original offense, like Travelgate, and sometimes in the legal and political pushback, like the Lewinsky scandal. The Clinton trademark was withholding information from investigators.

Given that, Clinton's email secrecy today sounds familiar to the investigators who spent the 1990s trying to pry information out of her office. "This sort of behavior is all fully consistent with what we dealt with a few years ago," says Jackie Bennett, a prosecutor who served in the independent counsel's office investigating the Clintons. "There was almost always a delay or some insufficient production of some document or discovery request."

For example, as part of the Whitewater investigation, a grand jury subpoenaed Clinton's billing records from her days in Arkansas. The White House insisted the records could not be found. Two years passed, with no documents. And then one day, the White House announced that -- surprise! -- the records had been found on a table in the White House residence, virtually in plain sight.

Mrs. Clinton pleaded ignorance. "I do not know how the billing records came to be found where they were found," she said after testifying before a grand jury in January, 1996. "I, like everyone else, would like to know the answer about how those documents showed up after all these years."

As the Clinton White House years progressed, the first lady became a pro at confounding investigators. A veil of secrecy covered much of what she did, from responding to criticism to dealing with subpoenas -- even to organizing her own thoughts about events.

In May 1996, when Clinton appeared on the NewsHour with Jim Lehrer, she was asked if she planned to write a book someday about her experiences in the White House. "Are you keeping a diary?" Lehrer asked. "Are you keeping good notes on what's happened to you?"

"Heavens, no!" Clinton responded with a laugh. "It would get subpoenaed. I can't write anything down."

People around her didn't write anything down, either. "I don't put anything down in writing," Clinton loyalist Sidney Blumenthal told the Washington Post during the scandal years. (That policy eventually changed; Blumenthal was one of the first discovered to be sending emails to Secretary of State Clinton's private address, clintonemail.com.)

Others in the Clinton White House followed the first lady's example. Top aide George Stephanopoulos, for example, told investigators he did not keep a diary and never made notes about work at the White House. Later, when Stephanopoulos published a highly detailed memoir of those years, he explained that he used a friend, the liberal journalist Eric Alterman, to help him record his thoughts away from prying subpoenas.

In more recent years, Hillary Clinton created an atmosphere of secrecy around her presidential campaign. By late 2007, her Democratic rivals were "attacking her as overly secretive," according to a Times report. (In that case, she wanted to keep documents from her White House years a secret.)

So now, as prosecutor Jackie Bennett suggested, Clinton's obsession with secrecy as secretary of state, whether it broke any law or not, is entirely consistent with her performance in public office for decades. And that leads to one obvious lesson: If Hillary Clinton is elected president, the patterns of a lifetime won't change.

Massive Survey Finds Americans' Views on Gender Are Shifting, But Not the Way Leftists Want
Townhall
Cassidy Hutchinson deemed as ‘reliable’ over her memory about ... ketchup?
Twitchy
More Implosion of Hutchinson's J6 Claims as Adam Schiff Steps in It Big Time on CNN
Redstate
Another J6 Trump 'Bombshell' Outed as a Hoax!
PJ Media