While Obama Seeks New Ideas, His Bureaucracy Stifles Them 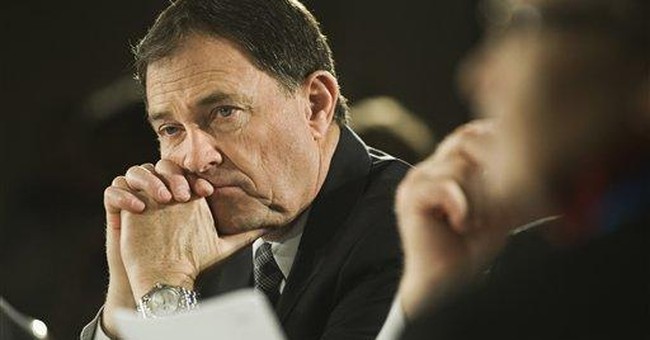 Nearly a year ago, Utah Gov. Gary Herbert and his healthcare policy team came up with a simple way to save the state's Medicaid program a lot of money. Why not have Medicaid recipients and applicants handle their paperwork online? Using e-mail and a special website rather than paper, Herbert calculated, would save Utah about $6.3 million a year. "It seemed like a no-brainer to us," says the governor.

The problem was, going paperless required a rules waiver from the Department of Health and Human Services. And that's where the idea ran into a brick wall.

"We tried for eight months to get the waiver," says Herbert. HHS delayed and delayed and delayed -- and then finally said no. "The denial we got back from the secretary of HHS was by e-mail, of all things," Herbert says, pausing a second for the listener to take it in. "The irony is rich."

It might seem odd that a governor would need to become personally involved in the question of whether his state can use e-mail to deal with Medicaid recipients, but that's what happened next. Still determined to go paperless -- "I know in Washington it's chump change, but for Utah, $6.3 million is real money" -- Herbert traveled to the Nation's Capital to meet Cindy Mann, director of HHS' Center for Medicaid and State Operations. Mann and her staff were receptive, but then, a few weeks later, lower levels of HHS again held up the no-paper plan.

The bureaucratic runaround was on Herbert's mind when he joined other governors in the White House State Dining Room in late February to hear President Obama pledge to help states burdened by skyrocketing healthcare costs.

Obama told the governors that he is always open to new ideas to improve the system. "I don't believe that any single party has a monopoly on good ideas," the president said. "And I will go to bat for whatever works, no matter who or where it comes from."

After the event, Herbert approached Obama. "I said, 'You know, we've been trying to get this waiver and go paperless,'" Herbert recounts. "He said, 'That's a great idea.' And I said, 'I think so, too, but we can't seem to get HHS to give us the ability to do it.'"

At that moment, Obama spotted HHS Secretary Kathleen Sebelius nearby. "Kathleen, Kathleen -- come over here," he said, according to Herbert. When Sebelius came over, Obama explained what Herbert was trying to do.

A few hours later, Herbert received a handwritten note from the HHS secretary. "Just learned that we have worked with your staff, we have a draft agreement and we should have a formal agreement later today," Sebelius wrote. Utah had finally won permission to go paperless.

Herbert is pleased, but a little baffled at why getting an ordinary waiver was so hard. "I appreciate the fact that they've come around after eight months, but does it take a governor having to talk to the president of the United States to make a simple cost-saving change?" he asks. "And the bigger question is why in heaven's name do states have to ask for permission anyway?"

Herbert and other governors fear bigger problems ahead. New mandates in the Affordable Care Act, also known as Obamacare, will cost Utah $1.2 billion over the next decade, an increase Herbert calls unsustainable.

He's still frustrated that Congress and the Obama administration didn't pay much attention to governors during the Obamacare debate. "We were never even invited to the table," he says. And he's not impressed by the president's promise to allow states to opt out of Obamacare, as long as they meet the administration's requirements for coverage. "He's saying, you can have flexibility, as long as you do it our way," says Herbert.

But Herbert is happy the new Republican leadership of the House is paying more attention to the states. During his visit to Washington, Herbert, along with Mississippi Gov. Haley Barbour and Massachusetts Gov. Deval Patrick, testified before the House Energy and Commerce Committee, urging that Congress allow the states more leeway in paying for health care. "Real healthcare reform will arise from the states, not be imposed by the federal government," Herbert told the committee.

That seems unlikely, as long as it takes presidential intervention for the smallest improvements in the system. But Herbert is still hoping for the best.