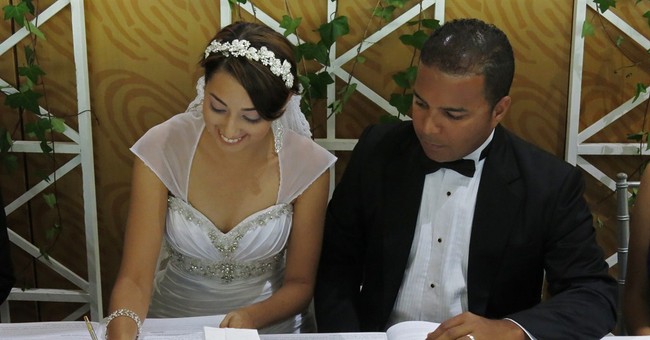 The scarecrows of Michigan’s sweet corn harvest are not the only straw men sowing seeds of deception these days.

A straw-man argument is the logical fallacy of accusing one’s opponent of making a weak argument he has not in fact made so that it’s easy to knock down. The latest example comes propped up in a National Journal article by Matt Berman. The article accuses State of Michigan attorneys of arguing something they don’t, namely, that if the courts redefine marriage, then “everyone stops having babies, and the state becomes a veritable ghost town.”

In fact, Berman’s article is entitled “Michigan Says Its Same-Sex Marriage Ban Helps Boost Population Growth.” But nothing in Michigan’s brief remotely resembles that straw man argument. Rather, Michigan’s actual argument supporting the protection of marriage is compelling—which is the likely reason that Berman avoids taking it on.

The activists, academics, and politicians who see the union of one man and one woman as an impediment to their self-styled “progressive” agenda must hide, even malign, the common understanding of marriage.

Michigan points out that marriage is a unique social institution that has meaning only because it consists of one man and one woman, and no other combination. Society encourages marriage to increase the likelihood that children will be born and raised in stable and lasting family structures headed by both the mom and the dad who conceived them. That necessary and laudable purpose—known as “responsible procreation”—is as relevant as ever and is why most state and federal courts have upheld marriage as an institution of one man and one woman.

Another straw man that frequently emerges is that democratic majorities that vote to preserve marriage do so because they think people involved in homosexual behavior should be harmed. But those who have sought to protect marriage have argued nothing of the kind. Rather, they wish to preserve and ensure the optimal environment for childrearing. This actual motive is based on centuries of experience along with the latest credible social science that affirms it. Reasoned disagreement is fair, but imputing false motives to marriage supporters is a disgraceful attempt to turn deception into perception.

All sides acknowledge the undisputed fact that same-sex couples cannot procreate. For this reason, the government’s purpose in encouraging a man and woman to raise the children born to them through marriage has nothing to do with so-called “discrimination.” Recognizing such biological differences in the context of defining marriage is called discernment, not animus.

Activists seeking to redefine marriage hoist these straw men in the field of debate to propagate the lie that nothing special exists about males and females joining in marriage. That’s because if marriage centers on the truth that men and women bring distinct, irreplaceable gifts to family life, then same-sex marriage makes no sense. So the activists who don’t care about any of that must deny the complementary power of men and women and the importance of both a mother and a father to children.

Redefining marriage rejects the idea that children need their mom and dad, and doing so would put us on unproven ground without just cause. The two sexes are both patently and mysteriously different, as most of us will personally acknowledge, and each is necessary to develop the best environment to raise responsible human beings.

If destroying that framework of understanding doesn’t cause any harm, then tell us, oh wise scarecrows, which biological parent doesn’t matter: the child’s mother or his father?