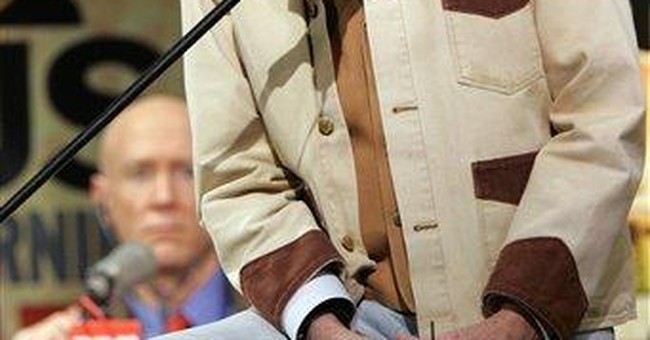 I often find myself thinking that if liberals didn’t have double standards, they wouldn’t have any standards at all.

Consider the uproar from the left when Don Imus opened his silly yap about the black women on the Rutgers basketball team. Now compare that to their response when David Letterman made his smarmy cracks about Sarah Palin and the governor’s 14-year-old daughter. The liberals immediately sprang to his defense, pointing out that Letterman is nothing more than a TV personality and is therefore free to make offensive jokes without fear of censure. So what do they think Don Imus is? The Secretary of State?

Or consider how choleric those on the left become any time that Dick Cheney defends the former administration. Well, if Obama and his cronies didn’t constantly attack Bush and Cheney and their policies, the chances are the ex-vice president wouldn’t feel compelled to set the record straight. Furthermore, Jimmy Carter never stopped bashing George Bush during the eight years he was the president, and yet nobody on the left ever suggested he shut up. On the contrary, he was hailed at the 2004 Democratic convention, and even had the honor of being seated next to the patron saint of left-wingers, Michael Moore. Speaking of Carter, how is it that he, who is always volunteering to monitor elections anywhere on earth, including the Westminster Dog Show, wasn’t in Iran, making sure that Ahmadinejad got 110% of the vote?

Liberals never got tired of telling us how much George Bush was despised by those in other countries, although, for the record, I kept asking the loons to name those countries, but could never prompt a response. I assume even they were too embarrassed to mention Iran, North Korea, China, Yemen and Russia. Instead, they kept insisting that America should be more like Europe. Inasmuch as conservative politicians are winning elections in England and all over the continent these days, the people finally waking up to the unmitigated disaster socialism is, I could now join in the chorus. But, of course, so far as leftists are concerned, I’d now be singing a solo.

I have to wonder, though, how much non-Muslim nations trust our current president. It’s one thing, after all, to travel to other countries and talk a lot of diplomatic flapdoodle, but when Barack Obama takes every opportunity to tell the world how awful we are -- or at least how awful we were until he got elected -- it has to make people wonder if, like his missus, he had never been proud of America prior to his canonization by the media.

It doesn’t make things a lot better when he makes obviously foolish remarks, such as insisting that the U.S. is one of the largest Muslim nations, and that Muslims played a major role in the creation of our republic.

That one really had me reeling, so I went back to my trusty old history book and looked it up and, sure enough, he was correct. Right there in black and white, I discovered that among the most influential of the Founding Fathers were Abdullah Washington, Mahmoud Adams and Osama bin Jefferson.