It's the Thought That Counts 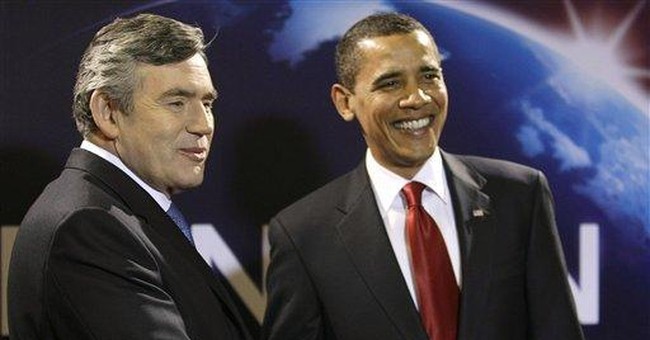 I never imagined I’d say it, but I’m beginning to identify with Barack Obama. I’m certainly not referring to his politics or his narcissism, but it seems that both of us really suck when it comes to gift giving.

First, he gave Prime Minister Gordon Brown some DVDs that were incompatible with English electronics, and then he gave Queen Elizabeth an iPod that contained his speeches. Well, I hate to admit it, but I can empathize. Shopping for a prime minister has got to be hard enough, but trying to shop for a woman who has her own country would give me the mother of all migraines. Frankly I’m surprised he didn’t just fall back on that old reliable. When in doubt, I say, you can’t go wrong giving cash. Which, by the way, seems to be one of the things, as opposed to bowling and speaking without a TelePrompter, at which the president seems to be quite adept. And, best of all, the cash, unlike the iPod, would be a personal gift because the Queen’s picture would be on it.

But I have to admit I’m beginning to really worry about the Community Organizer in Chief. I mean, he ran for president as the man who was going to make the world love us like nobody’s loved us, come rain or come shine. Instead, he’s turned into the master of the gag gift. I can’t help wondering what this practical joker is going to do next. Send Prime Minister Netanyahu a honey-baked ham? Send Mahmud Ahmadinejad a pair of elevator shoes? Send Pope Benedict XVI a whoopee cushion?

Frankly, though, I must confess I don’t know why we’re so concerned with how other countries feel about us. Do you think anyone likes Russia or China, Pakistan or Saudi Arabia? Do you think Mexico, France or Cuba lie awake at nights wondering if Holland will be inviting them to the annual tulip festival? Do you actually believe that Japan calls up Korea on a Friday afternoon and suggests they go bowling? Or perhaps you imagine that any country in the world has ever in its entire life said, “You know who I’ve really been missing lately? Let’s throw a come-as-you-are party and invite good old Germany!”