The Dumbing Down of Academe 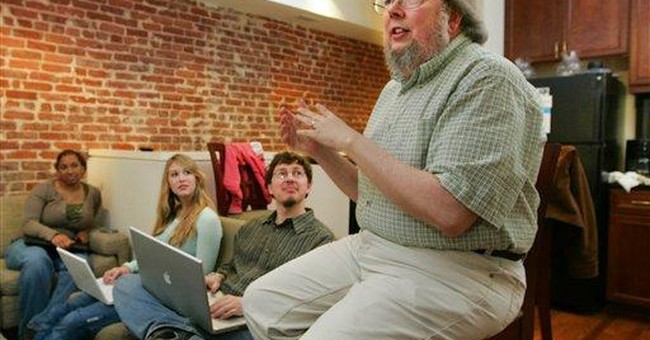 Just when you think the folks on the left can't get any goofier, they go and surpass themselves. If silliness were an Olympic event, these lunkheads could be counted on to bring home the gold. The fool's gold, that is.

Actually, they could probably excel in the sprints, seeing as how they're not weighed down with a whole lot of common sense. In case you haven't gotten the word, the religious left, as I like to think of them, seeing as how they live their lives by a certain dogma, have now determined that poor people are terribly under-represented on America's college campuses. It was, I suppose, only a matter of time. After all, if no institute of higher education can justify its existence unless its student population is composed of X-percent of women, Hispanics, blacks, gays and the physically handicapped, some Democrat was bound to notice that there still remained an untapped source of future votes; namely, poor, young whites.

Diversity in the student body is the catch phrase. But, as you may have noticed, there is no parallel diversity along the faculties. In the humanities departments of most American colleges, professors run the gamut from liberal to radical. Given a choice between Ahmadinejad and a Republican, a large majority would vote for the little schmuck in the windbreaker.

Frankly, I see no reason to give preferential treatment to students for no better reason than that their parents are poor. If a mix of humanity is what they're really seeking, I say they should throw open the doors to idiots. And, no, I'm not referring to those aforementioned professors in the liberal arts who get paid a lot of money for doing nothing more than foisting their half-baked politics on a bunch of highly impressionable 18-year-olds. No, I'm talking about the genuine article -- people with subterranean I.Q.s.

I mean, if diversity is of such monumental importance, why limit it to race, gender and national origin? Obviously, members of these groups have far more in common with each other than they have with the intellectually- challenged -- or whatever it is that the P.C. crowd is calling dumb people this week.

Honestly, I haven't a clue why college would be a more exalting experience just because the student in the next seat has different pigmentation or hails from a country where indoor plumbing is optional.

Admittedly, it's been many years since I was a collegian. Still, as I recall, the real value of the four years, aside from learning how to drink and how to talk to women without stuttering, was the enforced proximity to the minds and works of Socrates, Newton, Freud, Shakespeare, Plato, Milton, Michelangelo, Einstein, Da Vinci and Jefferson, and was neither enhanced nor diminished by the color or creed of the other students.

The truth of the matter was that my interest in my fellow scholars, and I don't think my attitude was at all atypical, was limited to wanting to date the more attractive coeds and wanting to eviscerate those brainiacs most likely to raise the class curve.

Inasmuch as smart, poor kids already receive academic scholarships, one can only assume that it's the stupid ones whom the social engineers are trying to cram through the ivied portals. But, inasmuch as once in, they're destined to flunk out, I have a better solution. I suggest we take our lead from "The Wizard of Oz." The Scarecrow, as you may recall, didn't waste four years boning up for final exams. The great and powerful Oz merely handed him a diploma, and just like that, Ray Bolger was squaring the hypotenuse and jabbering away like a young William F. Buckley, Jr.

Why not give diplomas to anybody who wants one? In a day and age when people are wasting their parents' hard-earned money majoring in things like Gay Studies, Sit Coms of the 60's, and Comic Books as Literature, why not do the decent thing and just hand out sheepskins to anyone who says, "Please"? A built-in bonus of my plan is that with all those goobers off the campuses, there would be additional parking spaces for the people studying to be doctors, mathematicians, and scientists.

After all, when all is said and done, most college graduates aren't really smarter than other people. They just think they are.