Why I'm Voting for John McCain 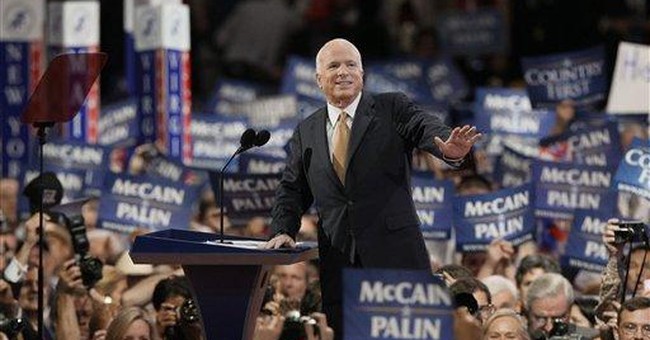 Frankly, I’m amazed that the Democratic party is anything more than a cult. How in the world do they garner more votes than the Libertarians or the Greens? They are beholden to trial lawyers, teachers unions and the ecological crazies. So, why is it that upwards of 55 million Americans are ready, even anxious, to vote for Barack Obama in November? It’s a scary thought. But not half as scary as the notion of “Hail to the Chief” becoming Senator Obama’s theme song.

Democrats insist that we shouldn’t drill off the Pacific coast or in Alaska or in the Dakotas because they claim we wouldn’t get a drop of oil for at least 10 years. And that’s true, but only if the same left-wing idiots who are more concerned with moose than with people won’t allow the oil companies to build new refineries. Also, even if it were true that we wouldn’t be any better off for an entire decade, what do you suppose they’ll be saying in 2018, when gas is going for 25 bucks-a-gallon?

Speaking of the energy crunch, there’s a guy down in Georgia who claims that he can turn virtually anything, including grass clippings and table scraps, into methane gas. He got the idea while standing downwind from the cows at his food production company. He and the U.S. military are building seven pilot plants they claim will give us a million barrels of oil a day. If everything pans out as they think it will, they claim we’ll be free of dependence on foreign oil within five years. Best of all, it suggests that all those gas bags in the House and Senate will finally be of benefit to America. It’s my guess that hooked up properly, Nancy Pelosi, alone, could supply all the energy needs of Dayton, Ohio. Do you realize that Speaker Pelosi, who is only a few heartbeats from the Oval Office, owes all of her power and prestige to the fact that about a hundred thousand people in San Francisco, a city in which cross-dressers constitute a voting bloc, voted her into the House and about 125 House Democrats then elected her to the speakership. You need more votes than that to be elected the mayor of Fresno.

I probably shouldn’t belittle those so-called public servants in Washington, D.C. After all, how would you like to have to wake up each day, knowing you are going to have to listen to the likes of Barbara Boxer, Robert Byrd, John Kerry, Barney Frank and John Murtha, flapping their gums, and all the while pretending you’re paying close attention?

But enough about politics. Let’s discuss religion. That brings us to Barack Hussein Obama, the presumptive messiah of the Democratic party. It’s a funny thing about Democrats. Although they tend to be secular in nature, they are strict fundamentalists when it comes to their candidates. They refuse to acknowledge that their standard bearers have any shortcomings. Republicans, on the other hand, when discussing their own candidates, are eager to point out their every conceivable fault. Republicans are simply more honest and far more realistic than liberals. They acknowledge they are not voting for God, merely the better candidate.

For many of us in the GOP, the problem with John McCain is that he strikes us as wrong-headed when it comes to illegal aliens and campaign reform. On the other hand, he is in favor of appointing conservative judges; he is for attacking radical Islam on their home turf; he is for doing anything and everything to prevent a recurrence of 9/11; he is for lower taxes and for drilling our way out of dependence on the sorry likes of Russia, Venezuela, Iran and Saudi Arabia; he is for siding with Israel, America’s single ally in the Mideast, and against the degenerates who support Al Qaeda and Hezbollah, who honor suicide bombers, and who danced in the streets when their friends and relatives brought down the Twin Towers.

But, to be fair, there is much to be said about Senator Obama. Where shall we begin? Perhaps with the fact that he’s married to a bitter, angry, anti-American racist. And let us not forget his minister, who damned this country and white people for a thousand Sundays while Senator Obama sat in a pew and somehow heard nothing offensive being spewed from the pulpit. Not to be overlooked is his friend, Tony Rezko, a Chicago fixer who went to jail on corruption charges, but not before making certain that Obama got a very favorable home loan. Other notables on Obama’s list of friends and associates are Bill Ayers, who was an American bomb thrower, and Father Pfleger, a priest who reminds some of us of the late, unlamented, anti-Semite, Father Coughlin.

The fact remains that Barack Obama is 47 years old and he doesn’t have a single friend, associate or religious mentor, who isn’t the sort of creep that most of us would cross the street to avoid.

Obama, we’re told, will bring us all together, but during four years in the U.S. Senate, he has never voted for a bi-partisan piece of legislation. His memoirs are jam-packed with illegal drug use, racist rants and sophomoric Marxism. He claims to be post-racial, whatever that means, but the church he attended for 20 years gave its highest honor to Louis Farrakhan just last December. I suppose that also escaped Obama’s notice.

Frankly, I never thought I’d feel sorry for Hillary Rodham Clinton, but I do. Thanks to the mainstream media banding behind her opponent, she lost primary after primary before talk radio hosts and Internet bloggers got the unvarnished, unpleasant truth out about Obama. By the time Americans found out what kind of man her opponent is and she started winning elections, it was too late to catch up. By that time, too many of the so-called Super Delegates had, like those horses in “Cinderella,” turned back into the rodents they really were.

It is my own belief that Barack Obama is the single worst presidential candidate in my lifetime. I bet some of you think I’ve already forgotten about Jimmy Carter. I only wish. To my way of thinking, Carter was undeniably the worst president. Among other things, he saddled America with 21% inflation and 12% unemployment. He also turned his back on the Shah of Iran, thus opening the door to the Ayatollah Khomeini and thirty years of world-wide Islamic terrorism. Then, not one to rest on his laurels, Carter became the worst ex-president in American history, capping it off by accepting the Nobel Peace Prize even after the committee announced they intended to use his selection as a way to kick President George Bush in the fanny. I’m sure that when Jimmy Carter dies, the Nobel Prize will be highlighted in his obituary. What I’m sure the press won’t mention is that it’s an honor he rightfully shares with North Vietnam’s Le Duc Tho, Kofi Annan and Yasir Arafat.

Finally, I was wondering if someone could please explain why it is racist to vote against someone who is half-black, but not racist to vote for someone for that very same reason? I mean, it’s one thing for 90% of black Americans to troop out and vote for Obama in November. After all, they’d likely vote for David Duke so long as the Democrats saw fit to nominate him. But it’s quite another thing when they voted 90% for Obama when he ran against the equally liberal Sen. Clinton for no other reason than that he’s 50% blacker than she is.

In conclusion, let me just say that some of you were no doubt pulling for Mitt Romney, some for Rudy Giuliani, others for Mike Huckabee or Fred Thompson or even, God forbid, for Ron Paul. I, myself, backed a couple of those guys once I realized that Newt Gingrich wasn’t just playing hard to get. However, once I understood that John McCain was the one person in a position to make certain that the only way Barack Obama would get to the Oval Office was as a member of a tourist group, I swore my allegiance to the distinguished senator from Arizona, the man who served more time, more honorably, in the Hanoi Hilton than Barack Obama has spent in the U.S. Senate.

Some months ago, I suggested a bumpersticker that read: Better an Imperfect Conservative than a Perfect Socialist. I hope it’s a message that resonates with all of you, come November 4th.

Oh, and by the way, have I mentioned that I’m nuts about Sarah Palin?