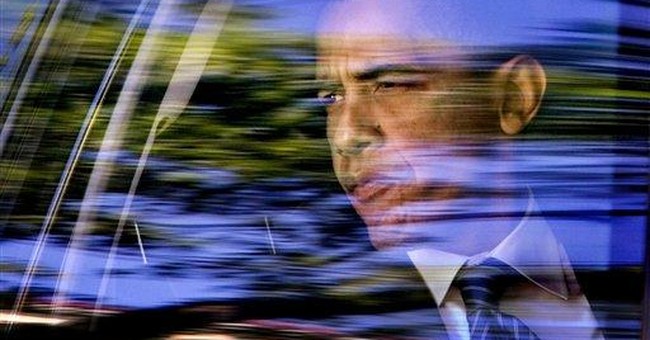 Seeing how thrilled so many of my fellow Americans are that a black man -- even a half-black man -- is going to be on the presidential ballot in November I can’t help wishing I were one of them. It’s as if there’s a great big party taking place and I’m stuck outside with my nose pressed against a window. But, frankly, I don’t know what the hoop-de-do is all about.

I mean, it’s always nice to be reminded that America is the place where anyone is free to achieve his dreams, although perhaps not quite yet her dreams. But when it comes to being president of the United States, the commander-in-chief of the best and the most powerful nation on earth, I don’t think we should be getting quite this excited. To me, Barack Obama seems like nothing more than the end result of affirmative action run amok.

His fans insist that it’s unfair to question his qualifications or judge him by his associations. That makes sense because if I were a fan of his, I sure wouldn’t want anyone scratching beneath the surface of a pleasant smile and a soothing voice. And, believe me, if he were auditioning for a job as a TV announcer, I’d hire him.

The Obamans insist that mentioning any of the man’s disreputable friends and religious mentors is a no-no that smacks of McCarthyism. This is an odd complaint because, one, McCarthy was right when he pointed out that the folks who associated with other people at Communist cell meetings were in fact Communists, and, two, every child is told that he’s going to be judged by the company he keeps. So, let’s face facts -- John Dillinger ran with a nicer crowd than this guy.

The first screwball we found out about was Reverend Jeremiah Wright, the gutter mouth whose swinish sermons Obama lapped up for a thousand Sundays. Then there was Bill Ayers, the mad bomber who should have wound up sharing a cell with Ted Kaczynski, but instead was apparently offered the option of becoming a professor. And let us not forget Tony Rezko, who was recently found guilty by a Chicago jury of just about everything except kidnapping the Lindbergh baby. It’s still up in the air whether he’ll be offered the same deal as Bill Ayers, but there’s no getting around the fact that “Professor Rezko” has a nice ring to it.

It probably isn’t cricket to include Michelle Obama in this dirty laundry list of Barack’s associates, and yet it’s hard to simply overlook the fact that he chose to marry this nasty, bitter, openly racist ingrate.

Finally, when it appeared that we couldn’t sink any lower in the barrel, out popped Obama’s longtime friend and religious mentor, Father Michael Pfleger. The first time I became aware of this fellow was when I heard segments on the radio of the speech he delivered at Trinity United. When, later that day, I saw him on TV, I was shocked to see that he was white. Although he seems to have forgotten much of his religious training while serving at Faith Community of St. Sabina, on the South Side of Chicago, he has certainly mastered the black patois. He actually sounded blacker than either Rev. Wright or Louis Farrakhan, but he obviously thinks along the same unsavory lines.

Later in the week, Father Pfleger apologized for his performance, saying, “I regret the words I chose on Sunday. These words are inconsistent with Senator Obama’s life message, and I’m deeply sorry if they offended Senator Clinton or anyone else who saw them.”

Apology not accepted. I, for one, am getting sick and tired of being played by the Obama crowd. Michelle didn’t mean she’d never been proud of America, Barack didn’t mean Iran was a small country we had no reason to fear, and Father Pfleger didn’t mean a word of his racist screed. Right…and a bear doesn’t make do-do in the woods.

Pfleger, by the way, not too long ago urged a crowd of blacks to drag a gun shop owner, John Riggio, into the street “like a rat” and “snuff him,” along with any Illinois state legislators who voted against gun control legislation. When accused of trying to incite murder, Father Pfleger, who prides himself on his street creds, claimed he had no idea that “snuff” is a synonym for murder. So far as I know, nobody bothered asking him, that being the case, exactly what it was he was exhorting the mob to do. Drag Mr. Ruggio out of his place of business and make him sneeze until he agreed to close up shop?

Frankly, I can’t fathom how it is Pfleger still has a job. But, perhaps after what it’s gone through in the past decade, the Church is so grateful that he’s not a pedophile costing them millions of dollars in lawsuits, this creep could walk down State Street at high noon wearing nothing but his turn-around collar and playing a harmonica and still be in line for a red hat.

Some of Obama’s other questionable associates are the thousands of blacks who flock to Trinity United every Sunday, eager to soak up their weekly dose of racist swill, laughing and applauding and shouting their heart-felt “amens;” thousands of nicely dressed black Americans who don’t have to pretend they disagree with a single ugly word of it because, unlike Barack Obama, they don’t happen to be running for president.