Bryan Crabtree
|
Posted: Aug 22, 2017 12:01 AM
Share   Tweet
The opinions expressed by columnists are their own and do not necessarily represent the views of Townhall.com. 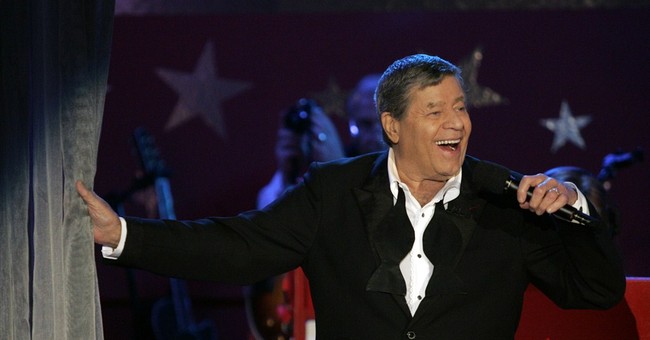 We lost a great entertainer this past weekend as Jerry Lewis passed away in Las Vegas at the age of 91.

I find it fascinating to observe the media (and most liberals) celebrating the life of Jerry Lewis, calling him “the great humanitarian” and “one of the greatest philanthropists of our lifetime.”

I don’t disagree with them. I chuckle in amusement wondering what they would say if one the last interviews Lewis gave before his death were to go viral.

He was asked about some of the most polarizing political and foreign policy issues of our time by reporter Raymond Arroyo on a television show called “World Over.”

When asked about ISIS, Lewis said, “ISIS has attacked the World, and we’ve got, all of a sudden, I”m wondering, where are all of our NATO allies…..Get all of [Europe’s military] to wipe them out…It’s ridiculous.”

This was reminiscent of President Trump's attacks on NATO during the campaign which were widely rebuked.

Lewis was also asked about the Middle-East refugee crisis and he bluntly interrupted the interviewer to say, “Refugees should stay where the Hell they are.”

Arroyo pushed back saying it was “a humanitarian crisis” to which Lewis asserted “nobody has worked harder for the human condition than I have, but they’re not part of the human condition. If 11 guys in that group of 10,000 are ISIS, how can I take the chance? I don’t want to lose another Frenchman or another Englishman.”

This thinking reminded me of Donald Trump Jr.’s Skittles comparison during the campaign. Remember? “If you were given a bag of 100 Skittles but were told three of them were poisonous would you still try to eat the bag?” This analogy was made in reference to the comparison of having just two or three ISIS operatives hidden in a population of refugees we are attempting to bring into America. By this analogy, it’s just too dangerous to take that chance.

The interview was during the 2016 campaign for president and before Trump was elected.

Lewis’s views on Trump would be stunning to some in the media who are celebrating his life. Arroyo asked what Lewis thought about Donald Trump and he answered, “I think he’s great…because he’s a showman. And, we’ve never had a showman in the president’s chair.”

One of the entertainment industry’s most prominent, well-known and beloved performers seemed to err on the side of nationalist views on fighting ISIS, immigration and Trump. I'm laughing because here's a guy that undisputedly is one of the foremost proponents of human dignity and the advancement of ‘the human condition’ who shockingly rebukes those so-called ‘humanitarian- Democrat policies.’ He further believes that Trump is on the ‘right side’ of those issues.

Honestly, Democrats don't actually believe that it's a good idea to bring hundreds of thousands of refugees into this country either. Their refugee policy is nothing more than political kidnapping. In other words, they are kidnapping refugees in their home countries and removing them for the sake of creating a larger ‘victim constituency.’

Most of these refugees simply are fleeing deadly and/or oppressive circumstances. However, most of them want to stay in their home country and culture.

Liberal refugee policy is nothing more than an attempt to detach cause and effect. ‘The cause’ is liberal policies and their failures. ‘The effect’ is an unimaginable refugee crisis. Their current strategy involves helping the refugees to distract from the fact they created the crisis through their own stupidity and ignorance.

It's also another instance of ‘moral math’ by Democrats. Leftist policy is laden with the unspoken rule that the end justifies the means - no matter how immoral or unethical. Liberals believe that identifying racists (by their arbitrary standards), allowing illegals to cross our borders and attempting to naturalize refugees are all compensating netting them a moral superiority. This feeling of superior morality more than justifies (in their minds) their otherwise destructive policies.

When a great humanitarian like Jerry Lewis agrees with Trump on such important issues, we should all listen. He doesn’t believe that the liberals’ foreign policy is acceptable and he clearly didn’t believe in the political kidnapping of refugees.